Russian oligarch plans for Babyn Yar seem aimed at fuelling anti-Semitism in Ukraine Contentious choice of Babyn Yar Holocaust Memorial Complex is a win-win situation for RussiaHow can a Russian oligarch control remembrance of the Victims of Babyn Yar in Ukraine?Babyn Yar: "Did the sun really not pale at the sight of that horror? "Zisels: Synagogue on Babyn Yar graveyard is ‘super provocation’ aimed at discrediting Ukraine How can Ukraine’s leaders hand Babyn Yar into private Russian hands? Ukrainian civic journalist was ‘voluntarily’ abducted, asphyxiated and beaten by Russian FSB‘My mom wanted to take poison, but she learned from a letter that we were alive.’ The story of a doctor from Mariupol, part 2Mariupol, an Example of GenocideOksana Stomina: This is medieval cruelty, multiplied by modern possibilities and sick, maniacal ambitions22 journalists killed since Russia began its total war against UkraineMass grave near Mariupol could contain up to nine thousand victims of the Russian invaders Over 60 places of worship in Ukraine, as well as sites of cultural heritage, have been attacked by the Russian invaders, with some totally destroyedRussian invaders kill 96-year-old Ukrainian Holocaust survivor Russia has already greatly surpassed the Nazi Third Reich by insidiously launching missile and bomb attacks on UkraineUkrainian survivors of the Holocaust demand Putin and Russia get out of Ukraine Babyn Yar bombed by Russia, 80 years after Nazi Massacre of Ukrainian Jews Сьогодні – 80-та річниця трагедії Бабиного ЯруБабий Яр, или Память о том, как в народ превращалось строптивое племяФонд «Бабин Яр» закликає припинити підтримку російського проєкту меморіалізації
• Topics / Victims of political repression 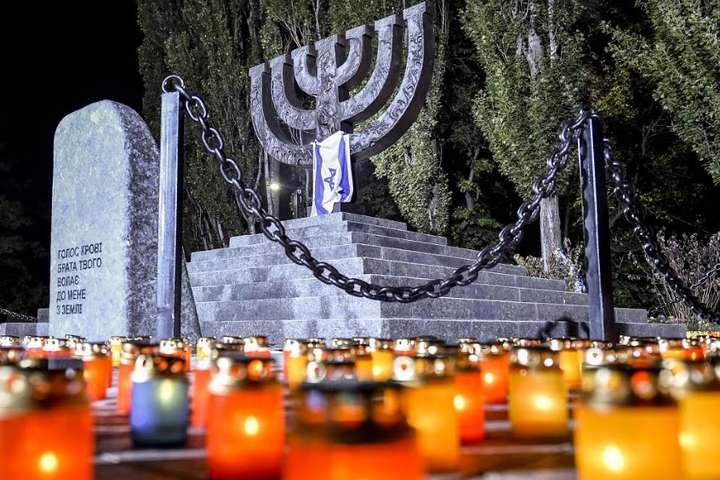 Despite assurances that there would be public discussion before any final decision, Ukraine’s leaders are clearly giving support to the highly contentious Russian-funded Babyn Yar Holocaust Memorial Complex.  Ukraine’s Culture Minister, Oleksandr Tkachenko, has given permission for a synagogue to be built on the site of the former Kyrylivske Christian Orthodox graveyard which falls within the territory of Babyn Yar. This is something which prominent Ukrainian Jewish figures had recently condemned as deliberate provocation and which the Ukrainian project* for memorializing Babyn Yar specifically prohibits.

Vitaly Nakhmanovych, historian and one of the authors of the Ukrainian project, reports that on 28 January, the Babyn Yar Holocaust Memorial Complex [BYHMC] began construction work for a synagogue on the territory of the Kyrylivske Christian Orthodox graveyard, with the permission from Tkachenko issued on 22 January.  Nakhmanovych notes that there was a meeting a while back at the Office of President Volodymyr Zelensky, where it was agreed that prior consent for such building work would first be obtained from the leaders of Christian faiths.  Since the prospects for receiving such consent were extremely remote, he says, BYHMC have tried to bypass this by renaming the synagogue which is now entitled “Place for Contemplation’.

It seems quite clear that this is a mere ruse as a new creative concept for the Babyn Yar Holocaust Memorial Complex was presented on 25 January, with this clearly referring to a ‘Synagogue at Babyn Yar’.

In addition, Nakhmanovych reports, employees of BYHMC were, on the direct instructions of the Minister of Culture, given all the drawings for the office of the former Jewish Cemetery on Melnyk St, where they plan to build a museum in memory of the victims of Babyn Yar.  He believes it is clear that Tkachenko was not acting at his own discretion but was following the general direction taken by the country’s leaders.  On 27 January, the 76th anniversary of the liberation of Auschwitz and International Remembrance Day for the Victims of the Holocaust, President Zelensky did not visit Babyn Yar. Instead he chose to be present at the opening of the latest BYHMC installation.

In a bitter address to Zelensky just after the President in late July 2020 first openly declared support for BYHMC,  Nakhmanovych expressed horror that BYHMC was planning to build on old burial sites.  He wrote that those who can so flagrantly ignore the prohibition of such desecration grew up on the Soviet disregard for graves, and asked how we can hope to preserve hundreds of Jewish cemeteries and places of mass burial if Jews themselves begin to build on them.

Unlike the Ukrainian project, the BYHMC complex would build on Jewish, Kyrylivske Orthodox and Karaim graveyards.

Like others who have expressed support for BYHMC, Zelensky spoke of the need for a memorial to remember the victims of the Holocaust.  This, however, is not in question, as Zelensky has every reason to know since the Ukrainian project was prepared at the request of Ukraine’s government.  Even if President Zelensky was initially unaware that there was a very good project and no reason to bypass it,  there have been several major appeals – first from Ukrainian public figures; then from Ukrainian Jews, as well as one initiated by Ukrainian Jews and open to everyone. Zelensky talks so much about heeding public opinion, yet here he is running roughshod over it.

There has, in general, been a very worrying lack of openness about the plans for Babyn Yar. Excavations began without any announcement on 25 December 2020, while many Ukrainians were celebrating Christmas, at the site (behind the Menorah) where, until 1929, there was a Kyrylivske Orthodox cemetery.  Although Max Yakover, BYHMC General Director, told Radio Svoboda that the work had been to ascertain if there were graves and that they had dug only a metre deep, the videos shared on social media were interpreted by many as suggesting that graves were being dug up.

Josef Zisels, Co-President of the Vaad, or Association of Jewish Organizations and Communities of Ukraine and former Soviet dissident, called the excavations “shameful”.  On 29 December, in a post entitled ‘Vandalism in action’, he wrote that excavation work had been continuing that day with the use of heavy equipment.  It was carried out by the Kyiv expedition of the Academy of Sciences’ Institute of Archaeology  (headed by Vsevolod Ivakin) which had received a permit in January 2020 from the Ministry of Culture.  This, however, was for carrying out archaeological investigations in Kyiv with the help of a metal detector.  The equipment seen in the video here is assuredly no metal detector.

Although public opinion regarding plans for the memorial complex were partly galvanised by the appointment late in 2019 of a controversial Russian art director, Ilya Khrzhanovsky and his disturbing proposals for Babyn Yar, there is another absolutely pivotal concern.  The financial strings behind an essentially private project are pulled by Russian businessmen, known for their success under the regime of Russian President Vladimir Putin.  It became obvious that the initial appeal regarding the need to stay with the Ukrainian project, from May 2020, had been noted when the sponsors of BYHMC seemed to change nationality.  Mikhail Fridman and German Khan went from being referred to as Russian businessmen to being described as ‘Ukrainian Jews’,  They and Pavel Fuks were certainly born in Soviet Ukraine, but all made their money in Russia, with only Fuks having, reportedly, severed his business interests in Russia because of the latter’s aggression against Ukraine.  In 2018,  Fridman, the main sponsor, was reportedly placed by the US State Department on a list of figures with ties to the Kremlin.

In September 2020, BYHMC erected an ‘installation’ to mark the 79th anniversary of the Babyn Yar Massacre by the Nazis of over 33 thousand Jewish men, women and children.  As well as doubts about the work itself, there were serious concerns about where it was placed.  Zisels dismisses the BYHMC assertions that the installation was beyond the boundaries of the former Jewish gravesite and says that independent researchers have found documentary evidence showing that the plot of land where construction is planned lies on the territory of that Jewish graveyard.

Zisels was one of the initiators of what began as a Second Appeal of Ukrainian Jews to Ukraine’s Civil Society in support of the Ukrainian project for the memorialization of Babyn Yar, following the first such appeal, summarized in English here. It now, in fact, has become a general appeal, and can be endorsed by leaving your name here.   The signatories express their support for the need “to honour the memory of the tens of thousands of Jews and people of other nationalities and faiths killed by the Nazis at Babyn Yar during the Second World War. The best representatives of our and other peoples have struggled for this over many years. However it is not a matter of indifference how and at what a price this idea is brought to life. We consider any solution to be inadmissible and impossible if it envisages construction work on the sites of cemeteries and places of mass burial, this runs entirely counter to Jewish and general human tradition and morality. We therefore support the Ukrainian project for comprehensive memorialization of Babyn Yar which does not envisage any fundamental construction work on the land where there were Orthodox; Jewish; Karaim or Muslim graveyards, and where the last remains are buried of tens of thousands of victims of the Nazi executioners.”