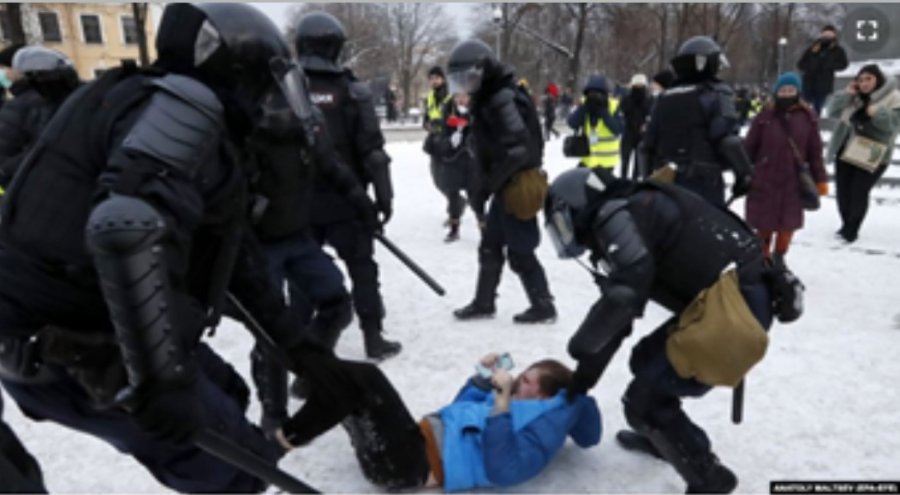 Russia may introduce criminal liability and even imprison people for making calls on western countries to impose sanctions.  Although this is for the moment only a threat, it is the second time the suggestion has been made in just over a month, and this time it came from the Speaker of the State Duma, Viacheslav Volodin.  Over the past year, Russia has already introduced criminal liability and very steep sentences against those seeking an end to Russia’s occupation of Crimea.  The proposed new legislation would add yet another weapon to the arsenal.

Volodin’s threat on 1 February followed the request from jailed opposition leader Alexei Navalny’s Anti-Corruption Foundation [FBK] to the new US Administration for sanctions to be imposed on 35 prominent Russians.  The list includes the head of Russia’s highly politicized Investigative Committee, Alexander Bastrykin; FSB head Alexander Bortnikov and Viktor Zolotov, the head of the Rosgvardia, which has played a major and very violent role in trying to crush protest since Navalny’s arrest.

In his reaction to the request, Volodin said that “there must be very harsh punishment for such kinds of actions”  He claimed that “everybody will condemn” the appeal to the Biden Administration for sanctions and that the ‘punishment’ should be introduced in legislation. He specifically mentioned a bill that has, in fact, been gathering dust since it was passed in its first reading in 2018.  The bill proposed criminal liability for what was termed “joining the regime of anti-Russian restrictive measures on the territory of the Russian Federation”.  In practice, this almost certainly meant merely complying with sanctions imposed over Russia’s invasion and occupation of Crimea, and appears to have alarmed businesspeople.

Volodin’s words follow the suggestion in late December 2020 from Russian oligarch Oleg Deripask that criminal liability be introduced for what he called “provoking sanctions”, claiming that such behaviour was akin to ‘state treason’.

It was clear then that by ‘provoking sanctions’, Deripaska was not referring to such behaviour as invading and annexing Ukrainian territory; waging undeclared war against Ukraine; or the use of a prohibited nerve agent against the Kremlin’s main political opponent.  The ‘treason’ was in wanting sanctions as a means of forcing Moscow to comply with international law.

The same is evident here.  The call for sanctions followed Navalny’s near-fatal poisoning and  then arrest and the savage crackdown on peaceful protesters who came out in his defence.  Russian President Vladimir Putin’s press secretary Dmitry Peskov reacted to news of the call by saying that it confirmed that Navalny’s Anti-Corruption Foundation deserved its status as so-called ‘foreign agent’.

In fact, it confirmed the main purpose of Russia’s notorious ‘foreign agent’ legislation, first introduced in 2012, namely to try to stigmatize civic organizations and treat any NGO receiving foreign grants as ‘traitors’.  The same refrain was clearly heard in Volodin’s words on 1 February.

Such attempts to treat legitimate protest as ‘riots’ and calls for sanctions as ‘treason’ are increasingly futile, especially with younger Russians who have twice now ignored the very real threat of violence and / or arrest and come out in peaceful protest.  There are simply too many videos, on the one hand of Putin’s alleged palace with its gold toilet brushes and, on the other, of Putin’s Rosgvardia or of OMON riot police in full combat gear attacking peaceful protesters and detaining both children and the elderly.  Their victims on 31 January included 84-year-old Lidia Olshanskaya from Rostov who had come out in protest, holding a placard reading: “I am a 2019-model ‘Orange threat’, ‘extremist-terrorist’. The following came out against me: the police; Rosgvardia; the centre for countering extremism; OMON riot police and the Federal Penitentiary Service. Are you really afraid?”

Russia has used other methods against those who support increased sanctions over the invasion and occupation of Crimea.

In 2014, a new Article 280.1 of the Russian criminal code punished for something dubbed ‘public calls to action aimed at violating Russia’s territorial integrity”.  As feared, the provision has been used against Crimeans and Russian nationals for spelling out the illegality of Russia’s Crimean land-grab.  In the case of Crimean Tatar Mejlis leader, Ilmi Umerov, he was tried and ‘convicted’ over an interview in which he spoke of the need for tough sanctions.

Late in 2020, Putin signed into law a bill envisaging prison sentences of up to 10 years for putting an end to Russia’s illegal occupation of Crimea, or making calls to do so.  The document was signed on the day that an overwhelming majority of countries in the UN General Assembly adopted a resolution effectively demanding just that.

The bill followed from one of the many dubious amendments to Russia’s constitution pushed through in 2020.  Having illegally ‘annexed’ Ukrainian Crimea, Russia is now claiming it to be Russian territory and introducing norms in the Russian criminal code punishing for what is referred to as ‘appropriation of Russian territory or calls to this’.  The bill which Putin has signed adds a new article to the criminal code entitled ‘Violation of territorial integrity’.  This allows for a sentence of between 6 and 10 years for ‘appropriation of a part of the territory or other actions aimed at violating territorial integrity, excluding delimitation; demarcation and re-demarcation of the state border of the Russian Federation with bordering states.

Volodin has already demonstrated his ambitions for long-range legislative weapons.  In July 2020 he announced that the new law following constitutional amendments would make it possible to extradite foreigners and put them on trial in Russia on ‘extremism’ charges for seeking an end to Russian occupation of Crimea.  This, he blustered, “ particularly concerns our Ukrainian colleagues. Statements that they make regarding Crimea will lead to punishment according to the laws of the Russian Federation. We will be able to demand their extradition here to Russia. On the other hand, these are questions which in future will also be presented, therefore this will, perhaps, cool many hotheads after we pass the norms of this law”.

There would seem no grounds for fearing that Germany or the USA would do anything but bin such an extradition request.