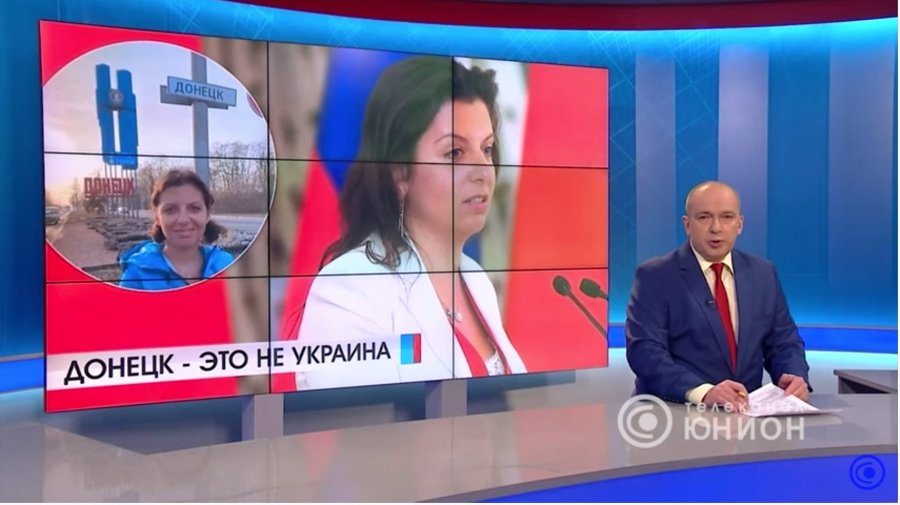 A propaganda channel in occupied Donbas with photos of Margarita Simonyan, chief editor of the Kremlin-funded Russia Today (RT) channel. The caption claims that "Donetsk is not Ukraine" Photo posted by Denis Kazansky

The self-proclaimed and Russian-controlled ‘Donetsk and Luhansk people’s republics’ [DPR/LPR] have presented a so-called ‘Russian Donbas’ doctrine which openly speaks of establishing control over all of the Donetsk and Luhansk oblasts.  This flagrant breach of the Minsk Accords coincides both with the first fatal shelling for many months and with behaviour at the Trilateral Contact Group meetings which participants from the Ukrainian delegation suspect is aimed at provoking Ukraine into withdrawing from the negotiations.

The so-called ‘DPR leader, Denis Pushilin, first announced plans to develop this new ‘Russian Donbas doctrine’ back on 13 December 2020.  While at first glance, there seemed to be more hype and historically absurd pronouncements, than substance to this new initiative, the obvious propaganda drive did prompt calls for the Ukrainian authorities to react appropriately.  Ihor Kozlovskyy, a renowned Donetsk religious scholar who was imprisoned in ‘DPR’ for almost two years, called the claims that Donbas had always been ‘Russian’ the latest stage in Russia’s hybrid warfare against Ukraine, spreading a ‘Russian world ideological virus’.

The new drive suggests that at present Moscow has no plans to incorporate the proxy ‘republics’ into the Russian Federation – something that many of the original Russian and pro-Russian insurgents openly want.  There is, however, a lot of talk about developing economic integration with the RF, and all such propaganda about ‘Russian Donbas’ is especially dangerous given Russian President Vladimir Putin’s decrees in 2019, making it very easy for Donbas residents to obtain Russian citizenship.

Most alarmingly, the ‘Russian Donbas’ doctrine demonstrates hostility towards the Ukrainian state and plans for a land-grab which could only be achieved through military aggression.  Such seizure of the entire Donetsk and Luhansk oblasts (or the Donbas) is for the moment a ‘strategic aim’, one that hearkens back to the idea of a ‘greater Novorossiya’ which, in Putin’s rendition from April 2014, included not only the Donbas, but also the Kharkiv and Odesa oblasts.

How much this ‘doctrine’ was penned in Moscow is unclear, but it certainly does parrot Kremlin narrative.  Pushilin stated that the doctrine’s aim “is to express in document form our inner feelings, that surge which united us when we arose against injustice; lies; persecution of all that is Russian, in order to return to our historic roots”.

It is worth noting that this narrative is thoroughly rejected by the original pro-Russian Ukrainian ‘separatists’, like Pavel Gubarev and by the ‘former’ Russian FSB colonel, Igor Girkin whose men first seized control of Sloviansk on 12 April 2014.  Gubarev has openly stated that, without Girkin and his men, there would have been nothing more than some ‘unarmed, toothless street protests’.  Girkin has made the same abundantly clear in countless interviews.

The danger from the “practical implementation of the Russian Donbas doctrine”, discussed at the forum, cannot be overstated.  According to Pushilin, the first areas that the doctrine is to be implemented are “education, science, culture, youth policy, as well as in legislative activities”.  Many young people will simply not remember any other reality than that of these pseudo republics, and will not know that they are being indoctrinated with lies.

During the event, the so-called ‘DPR foreign minister’ Natalya Nikonorova claimed that “discrimination against the Russian language and culture was one of the key reasons for the mass protests in the Donetsk and Luhansk oblasts which began in March 2014 and resulted in the holding of referendums on secession from Ukraine and the formation of independent republics”.  This too is entirely false, as Serhiy Harmash, journalist, civic activist and one of the two Ukrainians forced to leave Donbas who are taking part in the Trilateral Contact Group negotiations, has demonstrated.   He posts examples of the kinds of leaflets which were being widely circulated among miners and others in March 2014.  These focused on anti-Maidan sentiments and fears, not ‘Russian world’ ideology.

In the same text, Harmash comments on the 28 January forum, saying that Moscow is demonstrating that it does not intend to annex Donbas, and that is has instead chosen an Abkhazian variant for the development of the conflict.  This entails integration with Russia de facto, while and maintaining the conflict as a means of pressure on Ukraine.  There will be total issue both of the ‘passports’ of the pseudo republics, and of Russian, as well as efforts to sever all ties between the local population and government-controlled Ukraine.  They will try to push out all those seen as politically ‘unreliable’ and to create an artificial and ethnically monolithic ‘Russian people of Donbas”.

Harmash is convinced that all of this shows yet again that the Kremlin remains uninterested in an end to the conflict. “It suits it to retain the military status-quo in the Donbas to prevent Ukraine’s entry to NATO and the EU; to have it as a factor, distracting attention from the struggle against Russia’s occupation of Crimea and as an instrument for popularizing pro-Russian political forces in Ukraine”.

Seven steps were mentioned at the forum for the near future.  These rather confusingly included talk of the cessation of military action, while also mentioning establishment of control by the pseudo republics of all of Donbas.

It is typical that participants in the forum also discussed withdrawal from the Minsk Agreement.  According to Denis Kazansky, a former Donetsk journalist who is, together with Harmash, taking part in the lTrilateral Contact Group negotiations, the meetings of this group are becoming increasingly senseless.  On 2 February, he says, the Russian side tried to bring in some new people, “goodness who, or from where” and most of the meeting was taken up in pointless wrangling. “What is happening cannot even be called a dead end. It’s more like Russia is simply burying Minsk, trying, through overtly hooligan measures, to force Ukraine to withdraw from negotiations.”

Any Ukrainian rejection of the Minsk Agreement would only suit Russia, and Kazansky therefore believes that there needs to be intervention from western countries and a change in the format of the negotiations.