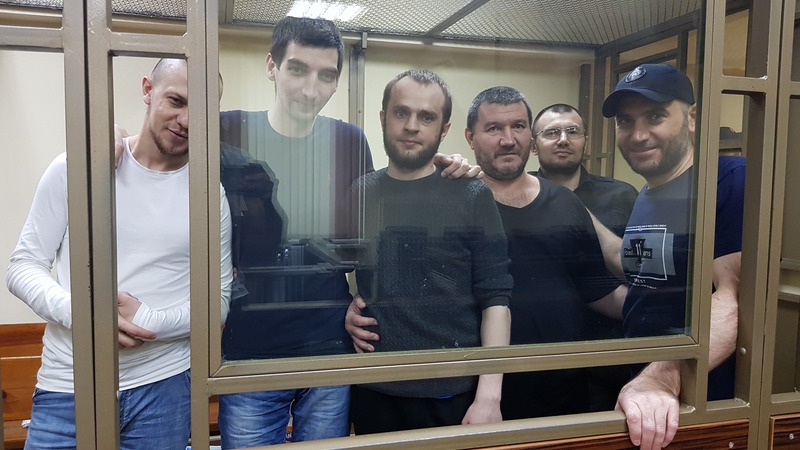 It is five years since the ‘operation’ in occupied Crimea when Russia first openly demonstrated the brutal reprisals and massive prison sentences it would use to silence human rights activists and other ‘dissidents’, including the terrorization of their children.

Masked men, brandishing machine guns, burst into 11 homes in the Yalta region early in the morning of 11 February 2016, leaving small children deeply traumatized.   At several places, the ‘officers’ broke down doors or windows, with this clearly for intimidation as nobody showed any resistance.  Four of the men taken away that morning: Muslim Aliev; Inver Bekirov; Emir-Usein Kuku and Vadim Siruk never returned home.  They are now serving sentences of from 12 to 19 years, without any crime, in Russian prisons.  We know from the testimony of a friend of Kuku’s that at least two of the other men taken away for ‘questioning’ were tortured and threatened with the same charges if they did not give false testimony.  Two much younger men - 24-year-old Refat Alimov and Arsen Dzhepparov (25) were arrested on 18 April 2016, and are also imprisoned to this day in Russia.

The brutality was appalling, but the case became internationally known, and was taken up by Amnesty International and other international rights NGOs because of the obvious targeting of human rights defender Emir-Usein Kuku.

The enforced disappearances and other violations that Russia brought with its occupation of Crimea prompted Kuku back in 2014 to become involved in human rights work.  He was in charge of monitoring abuses for the Crimean Contact Group on Human Rights and in giving legal aid to victims of repression.  His arrest in February 2016 was only the culmination of persecution that had begun much earlier.  It seems likely that the unprovoked attack by two men on 20 April 2015 was intended as an abduction, and it was only after Kuku’s shouts for help were heard and a crowd gathered that it turned into an FSB search and violent interrogation.  Several months later, after Kuku and a lawyer friend tried to hold the FSB to answer, criminal charges were laid against Kuku for a supposed ‘attack’ on an enforcement officer.  A few months after this, the Russian Investigative Committee announced criminal charges against the human rights defender over supposedly ‘extremist’ posts on Facebook.

All of this was evidently aimed at forcing him to give up his human rights activities, but was also doubtless revenge because Kuku had been asked and categorically refused to act as an informer for the FSB.

The culmination of such reprisals came with the supposed ‘terrorism’ charges on 11 February 2016.  These are based solely on accusations of ‘involvement’ in Hizb ut-Tahrir, a peaceful Muslim party which is legal in Ukraine and most countries, and is not known to have committed acts of terrorism anywhere in the world.  The secrecy with which Russia’s Supreme Court declared it and some other organizations ‘terrorist’ in 2003 suggests that the renowned Memorial Human Rights Centre is right in assuming that the ruling was politically motivated.  The ruling is now used to enable Russia to arrest law-abiding Muslims and sentence them to decades in prison.  The arrests on 11 February 2016 marked an ominous new trend in occupied Crimea with Russia increasingly using such pseudo-terrorism charges as a weapon against Crimean Tatar civic activists and journalists.   It was also with this case that Russia, as invading and occupying state, began accusing Ukrainian citizens of ‘planning to violently overthrow the Russian regime’.  There wasn’t a scrap of evidence, but essentially none was needed, since the prosecution needs only ‘proof’ of involvement in Hizb ut-Tahrir with this provided by fake ‘experts’ and by secret ‘witnesses’ whose testimony cannot be verified.

The case was also shocking because of the FSB’s harassment, even at school, of Kuku’s children and probably those of other political prisoners, and the later repression against Muslim Aliev’s daughter, Gulsum.  It epitomized the lawlessness that Russia had brought to Crimea, with a particularly malignant role played by a Ukrainian turncoat, now working for the FSB.  Alexander Kompaneitsev was behind the earlier persecution of Kuku. He tried to force Bekirov to give false testimony by threatening to arrest Bekirov’s nephew, Alimov, a threat that he carried out.  Dzhepparov and his wife were also expecting his arrest because he had courageously refused to collaborate with Kompaneitsev and the FSB.

49-year-old Aliev was sentenced to 19 years; 55-year-old Bekirov to 18 years;  43-year-old Kuku and Siruk (30) to 12 years; Alimov (28( to eight years, while Dzhepparov (then 29) got seven years.  Russia is also flouting the European Court of Human Rights in imprisoning men thousands of kilometres from their homes, making it effectively impossible for elderly parents and the men’s children to visit them.

All six men are recognized as political prisoners by the Memorial Human Rights Centre and are Amnesty International prisoners of conscience.