Crimean Tatar poet under criminal investigation in Russian-occupied Crimea for anti-war verseCrimean Tatar woman charged with ‘inciting hatred towards Russians’ over 4-year-old social media repostsCrimean Tatar, jailed on fake extremism charges, refuses to be cowered into silenceCrimean Tatar beaten so he couldn’t stand in court & jailed for alleged comments about RussiansRussia blocks military archives in further effort to distort the truth about World War IIComparing Stalin to Hitler could soon get you prosecuted in Russia, saying they both invaded Poland already hasRussian libraries purge books telling ‘the wrong history’ about the USSR in WWII Russians name Stalin as the most ‘outstanding’ figure of all times Every second Russian supports a monument to Soviet dictator Stalin ‘Stand up for your convictions, even if you stand alone!’ Anti-war activities in Russia, 3-9 OctoberFrom a Zwastika to "No to the War". Anti-war activities in Russia, 9-18 SeptemberVovchansk Engineering Works: Dungeons on the Chechen ModelThose who unleashed this war will not go to Heaven. Anti-War activities In Russia, 7-14 August 2022“Do You Still Want This War?” Anti-War Activities in Russia, 3-9 July 2022“We can"t clean ourselves from the blood” – digest of Russian protests“PEACE lost”– digest of Russian protests (UPDATED)Russia calls Soviet invasion of Poland in 1939 a ‘march of liberation’ Belarusian activist threatened with deportation from Ukraine for criticizing the police Russia destroys major human rights NGO with new ‘foreign agent’ restrictions PACE finalizes capitulation to Russia, while listing all reasons why this is appeasement
• Topics / News from the CIS countries
• Topics / Human Rights Abuses in Russian-occupied Crimea 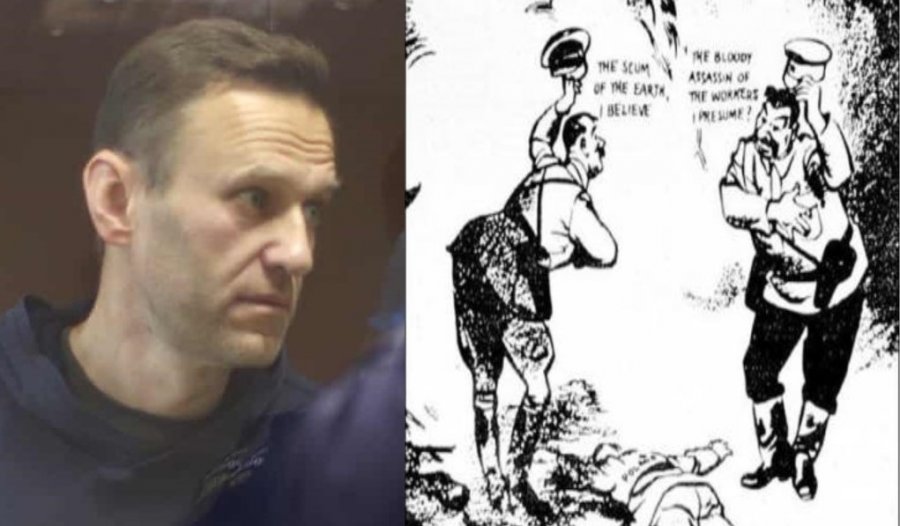 Alexei Navalny in court, February 2021 Photo Reuters, Hitler and Stalin standing over Poland which they had just carved up, cartoon from 1939

The recent use of a World War II veteran for Russia’s politically motivated persecution of opposition leader Alexei Navalny has whetted the appetite of those Russian ruling party politicians responsible for legislating repression.  The legislative amendments now proposed could have added a further five years to Navalny’s sentence and will certainly be used as a weapon in the current regime’s war against both historical truth and ‘dissidents’.

The legislative amendments, first reported on 22 February, have been prepared by a group of State Duma deputies, headed by Duma vice speaker Iryna Yarovaya.  The latter has been responsible over recent years for a number of particularly repressive laws on so-called ‘terrorism’ and ‘extremism’; on restrictions to peaceful assembly and to NGOs whom the state claims are ‘foreign agents’.

Yarovaya also played a major role in the adoption of the so-called Law against the Rehabilitation of Nazism in 2014, to which the new bill propose amendments.  The original law added a new Article 354.1 of the Russian criminal code, envisaging up to 3 years’ imprisonment for what was termed ‘public denial or approval of the facts established by the sentence of the Nuremberg Tribunal’.  The same norm made it possible to prosecute somebody for “spreading knowingly false information about the activities of the USSR during the years of the Second World War”.  It was condemned by the renowned Sova Centre as aimed at stifling historical discussion and restricting freedom of speech, and its application has shown that the concerns were justified.

On 30 June 2016, Vladimir Luzgin, a 37-year-old from Perm was convicted of circulating ‘knowingly false information’ and fined 200 thousand roubles for reposting an article on his social network page entitled ‘15 facts about Bandera supporters, or what the Kremlin is silent about’.  It is quite possible that the Russian enforcement bodies’ attention was attracted by the mention of Ukrainian nationalist leader Stepan Bandera, but the criminal charges were, quite incredibly, over the following statement.

This is, of course, entirely correct , yet the first court claimed that it was false information because it contradicted the facts set out in the Nuremberg Tribunal sentences.  That verdict was upheld by Russia’s Supreme Court on September 16, 2016, the 77th anniversary of Nazi Germany’s s invasion of Poland, 17 days before the anniversary of the Soviet invasion from the east.  It is now awaiting examination by the European Court of Human Rights.

The amendments seem very likely to pass as they have been added for the second reading of a bill on ‘defending historical memory’ bill “which was unanimously passed in its first reading on 10 February.

Yarovaya asserted that “nobody will ever remain unpunished for such crimes, which in the understanding of any normal person are repugnant from a moral point of view and, in their essence, criminal”.  The amendments are intended, she added, to provide norms guaranteeing one of the amendments to the Constitution in 2020 which speaks of “the absolute moral value” of the feat of the people during the Great Patriotic War.

Another of the authors, Alexander Khinstein, specifically cited the prosecution of Navalny as supposed proof of why the law was needed.  He said that changes would be made to criminal liability, via the above-mentioned law on ‘rehabilitation of Nazism’ and administrative liability, via the norms on ‘abuse of freedom of mass information  (Article 13.15 of the Code of administrative offences).  Such ‘offences’ would carry sentences of up to five years’ imprisonment or a five-million rouble fine.

The dangers of these proposed amendments can easily be seen in the charges against Navalny of having slandered 94-year-old veteran, Ignat Artemenko.

Artemenko is indeed a veteran of WWII, however Navalny’s comments were over a video clip advertising the constitutional amendments which Russian President Vladimir Putin was pushing through.  It was Artemenko’s part, together with others, in this propaganda video that Navalny was dismissive of.  He did not even directly mention the veteran, yet the video clip was widely used on state propaganda channels as supposed proof of Navalny’s disrespect for veterans.  He was found guilty and received a huge fine. As mentioned, the proposed amendments would have made it possible to imprison him for a further five years.

The case demonstrated exactly how far-reaching this new weapon could be.  Navalny had not mentioned Artemenko directly, and his criticism had to do only with a propaganda video, not to do with the veterans role in the War.

As historian and writer Sergei Prudkovsky told MBX Media, all such court cases are not about defending veterans, but about defending the regime.  He pointed out that the fine which Navalny was ordered to pay will go to the state coffers, not to Artemenko himself.

While it seems likely that Artemenko may not be in acute material need, many of the last surviving veterans live in abject poverty.  In 2015, a veteran of the Leningrad Blockade died in a St Petersburg police station where she had been taken on suspicion of stealing some butter.  Several months later, Putin was to issue his decree leading over subsequent months and years to the destruction of millions of tonnes of meat, cheese, fruit and other foods, many of which veterans are unlikely to ever see.   Is it not an insult to veterans that they are forced to live in such poverty, in a country swimming in oil dollars?, former world chess champion and fierce opponent of the Putin regime, asked.   Veterans in general get remembered once a year, around Victory Day on 8 May. Now they can be used also against opposition activists or ‘dissidents’.

It has been clear since Luzgin’s conviction in 2016 that historical facts are not necessarily a defence in Russian courts, and the possibility of a long prison sentence for writing the truth about the Second World War is surely intended as a deterrent.  Who would like to be the first Russian historian after this law comes into force to write about Soviet soldiers invading what was then Poland on 17 September 1939?  Or about the rapes of German women by some of the advancing Soviet soldiers?  Add to the list of dangerous subjects all of Joseph Stalin’s heinous crimes during the War, including the Deportation of the entire Crimean Tatar people, the Katyn Massacre, etc, not to mention criticism of Stalin himself, who was, after all, commander-in-chief of the war effort.  In short, any number of historically documented facts might well get you on trial for ‘insulting a veteran’  or slandering “the feat of the Soviet people” during the War.