Ukraine on brink of abetting Russia by destroying vital Crimean Tatar TV ATR Ukraine warned that abandoning Crimean Tatar TV ATR means giving up Crimea to RussiaCrimean Tatar TV ATR on brink of closing because Ukraine cuts fundingUkraine axes English & Crimean Tatar TV to launch risky Russian channel for occupied Donbas and CrimeaUkraine forces Crimean Tatar TV ATR to suspend objective reporting to Russian-occupied CrimeaRussia deports Ukrainian children to orphanage in occupied Crimea condemned as a ‘concentration camp’‘If I die, then only in my homeland’ — a resident of Izium refused to evacuate to RussiaOver 400 victims of Russian aggression remain unidentified in liberated Kharkiv oblast Ukrainian civilians disappear without trace after the Russians claim to have ‘humanely deported’ themRussia imports its own ‘judges’ to occupied Ukraine while planning 'legal carte blanche' for its atrocities Russian invaders torture and 'deport' Ukrainians for ‘extremist’ suport for Ukraine in Zaporizhzhia oblast Russia abducts and imprisons Crimean Tatar, then tries to mobilize him for its war against Ukraine Russia abducts and tortures Kherson official and his family for serving Ukraine Two effective death sentences in Russia’s most savage attack on Crimean Tatar civic journalists and activists Children to undergo compulsory military training in both Russia and occupied Crimea In Memory: Viktor Fainberg, courageous Soviet dissident, defender of Russia’s Ukrainian political prisoners В окупованій Макіївці розстріляли родину з 8 ромів: серед загиблих 4 дитини‘I believe the war will end soon, and everything will be fine’Russia plans to imprison soldier who admitted to murder and plunder in Ukraine - for ‘circulating fake news’Russia demolishes Mariupol Drama Theatre to try to blame Ukraine for its most heinous war crime
• Topics / Freedom of expression
• Topics / Human Rights Abuses in Russian-occupied Crimea 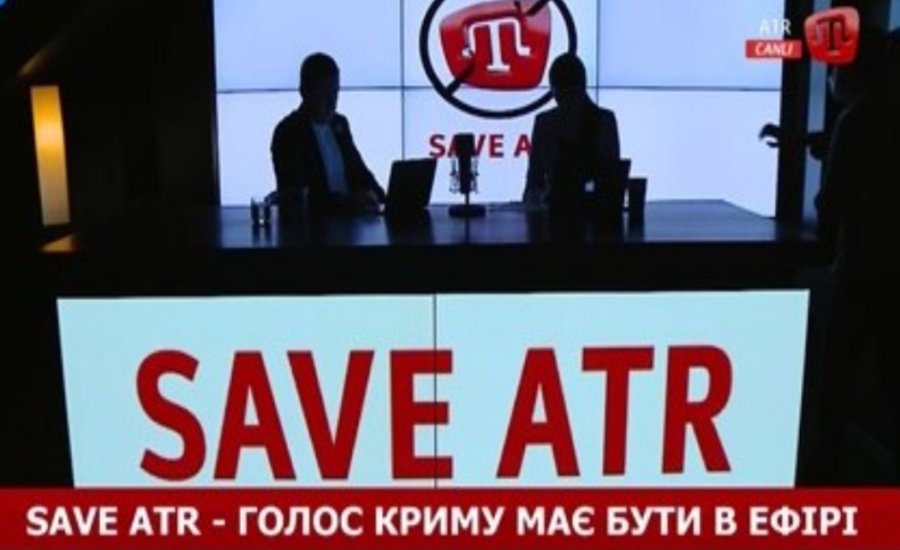 #SaveATR Part of the ATR Marathon

Radio Meydan FM stopped broadcasting to occupied Crimea on 1 March, only the second time that this first Crimean Tatar radio station has been silenced.  Last time it was the Russian occupation regime that drove Meydan, together with all other independent Crimean Tatar media, from Crimea at the end of March 2015.  Six years later, the responsibility lies solely with the Ukrainian authorities, and the question must arise why they are helping the Russian aggressor which has regularly blocked Meydan and other media providing truthful coverage about life under occupation.

Lenur Islyamov, General Director of TV ATR, reported on Monday that the radio station had been forced to stop broadcasting to Crimea as they could not pay the provider.  The first time in its 15-year history had been when driven out of occupied Crimea, however in September 2015 they had been able to recommence broadcasting thanks to the support of the Ukrainian state, the Ukrainian people and veteran Crimean Tatar leader Mustafa Dzhemilev.  Back in 2015, Islyamov recalls, he had gone with the Head of the Mejlis, or self-governing body of the Crimean Tatar people, to all government offices and spelled out to the officials the importance of reinstating broadcasting to occupied Crimea.  Islyamov calls this “Black Monday”, but swears that they will not give up, but continue their struggle for Crimea until they win.

Russia’s refusal in early 2015 to re-register the unique TV ATR, Meydan and other Crimean Tatar media, was widely condemned both in Ukraine and internationally, with most viewing this, as did the then ATR General Director Lilya Budzhurova, as an offensive not only against TV ATR, but against the entire Crimean Tatar people.

Since the renewal of broadcasting from Kyiv in September 2015, there have on several occasions been problems with major delays in providing the promised state funding

The situation became acute for a time in early 2020, with the massive shortfall in funding coinciding with the authorities’ inexplicable decision to axe the English- and Crimean Tatar- language services on the state-run UATV.  It was, however, confirmed by the Minister for Culture, Youth and Sport that 50 million UAH had been allocated in the 2020 budget specifically for TV ATR, and the funding was, finally, reinstated.

This was just one year ago, and the need for truthful coverage, in Ukrainian, Crimean Tatar and Russian, about human rights violations and other issues in occupied Crimea remains just as acute in 2021.  Yet now, Ukrainian government figures are claiming that the 50 million UAH this year was not allocated for TV ATR alone and that there needs to be some kind of vague and unspecified ‘competitive tender’.  It seems likely that any fair tender would in any case be won by ATR, however at least in early February, there was no sign of any competition. It all looked like a very unconvincing excuse for depriving pivotal media of vital funding, and risking them going off air altogether.

This is, in short, what Russia sought to achieve six years ago, and what it tries to do  via providers in occupied Crimea who block honest media.

As reported, the claims about a ‘competitive tender’ and about the 50 million needing to be shared around were made by Oleksiy Reznikov, Deputy Prime Minister and Minister on Reintegration of Temporarily Occupied Territory, during a Ukrinform interview on 5 February 2021.  Reznikov also asserted that some other media had already expressed interest in the mystery ‘competitive tender’, very unwisely claiming one of them to be Krym.Realii.  The latter, as part of Radio Free Europe – Radio Liberty [RFERL], is financed by US federal grants as a private grantee.  and could not be looking to other states for financial support.  Reznikov later, by telephone in a live broadcast, repeated this claim, with this prompting Volodymyr Prytula, Editor of Krym.Realii, to publicly state that they had not made any appeal to the ministry, and had no intention of doing so.  Following the interviews, ATR Deputy Director General Aider Muzhdabayev rejected most of Reznikov’s statements.  He pointed to the code that the 50 million was given in the budget under as confirmation that it had been allocated specifically for ATR.  He rejected the claim that Ukraine’s Accounting Chamber had objected to the financing of ATR and pointed out that the relevant documents were openly available on the Chamber’s website, with the same applying to claimed concerns from the Treasury.

Muzhdabayev asserted that this was a deliberate attempt to at least partially silence ATR, in order to remove questions linked with Crimean Tatars facing particularly fierce repression under Russian occupation, etc. so as to not irritate Moscow too much.  As reported earlier, another reason could be the sheer ease with which money, apparently sitting awaiting allocation, can end up spent on something else altogether. Reznikov’s ministry has already been involved in similar ‘reallocation’ of funding intended for political prisoners and their families.

In February 2020, Nariman Dzhelyal, one of the only Crimean Tatar leaders whom Russia has not driven from Crimea, wrote that the current situation was typical of the Ukrainian authorities who had learned nothing from Russian occupation.

“Some may think that the existence of ATR is not so important for Ukraine. I would remind them that Ukraine is facing the loss of sovereignty because the government has proven incapable of understanding who is their enemy, and who their friend.  Judging by everything, in six years, they have still not learned.”