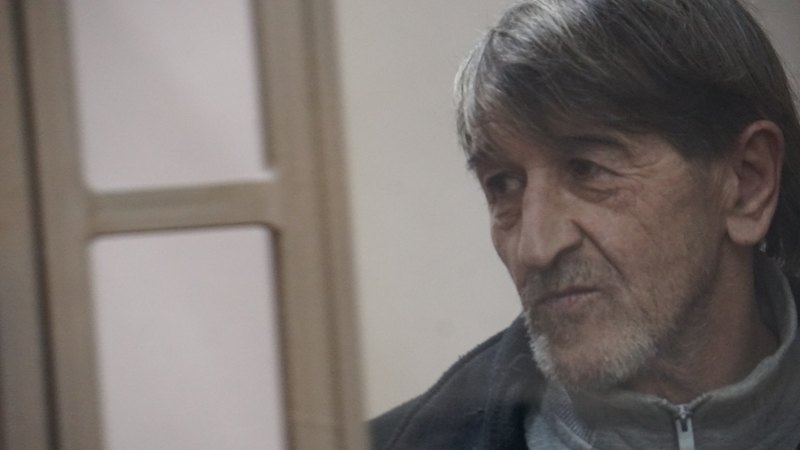 A Russian court has sentenced 62-year-old Oleh Prykhodko to five years’ harsh regime  imprisonment, with the first year to be served in a prison, the worst of all Russian penal institutions.  The sentence was significantly lower than that demanded by the prosecutor, but then the judges can have been in no doubt that they were sentencing an innocent man to a term of imprisonment that he may not survive.  The defence had demonstrated over and over again that the charges against the 62-year-old who had never concealed his opposition to Russia’s occupation of Crimea had been brazenly fabricated.

There was never any possibility of doubting the political nature of Prykhodko’s arrest on 9 October 2019, and prosecution.  It was, after all, a repeat of the earlier persecution of Volodymyr Balukh, coming literally one month after Balukh was released as one of the political prisoners whom Russia released in exchange, mainly, for MH17 witness and likely suspect, Volodymyr Tsemakh.  Both Balukh and Prykhodko had openly flown the Ukrainian flag over their homes in Crimea and spoken of their opposition to Russia’s occupation.  Both had suffered constant harassment from the occupation regime and administrative prosecutions before FSB officers turned up at their homes and claimed to have ‘found’ ammunition, in Balukh’s case, or  ‘explosives’, in Prykhodko’s.  In the subsequent ‘trials’, the defence presented compelling evidence that the cases had been fabricated, which the ‘judges’ ignored.

The main difference, unfortunately, lay in the severity of the charges.  Balukh’s ‘trial’ was child’s play in comparison with the ‘terrorism’ charges that the Russian FSB thought up against Prykhodko.  He was charged under three articles of Russia’s criminal code:  Article 205 § 1 - planning terrorist acts (supposed plans to blow up both the Saki Administration in Crimea and Russian general consulate in Lviv); Article 223.1 - illegally preparing explosive substances; and 222.1 § 1 (purchasing or storing explosives)   All of these charges were based solely on a bucketful of ‘explosives’ allegedly found in Prykhodko’s garage; and a telephone and memory stick that the FSB claimed to have found in the Prykhodko home.

Prykhodko has lived in Crimea all his life.  He and his wife, Lyudmila, moved to the village of Orekhovo (Saki region) in 2014, leaving their flat in Saki to their daughter.  Prykhodko is a blacksmith and accomplished metal-worker, however the couple spent a lot of time over the subsequent five years doing repairs to the home.  It is likely that the occupation regime had their eye on Prykhodko from the beginning of occupation because of his earlier links with the right-wing nationalist Svoboda party.  With no grounds at all, they tried to claim that he had ‘Nazi’ views.

Prykhodko was initially arrested on 9 October 2019 and charged with planning to blow up the Saki City Administration building.  As mentioned, there was nothing to back these charges except the allegedly found bucket with explosives.

Like with Balukh, Prykhodko had been harassed enough to know that searches were likely, which is just one of the reasons why he would have been most unlikely to leave explosives just waiting for the next FSB visitation.  Since Prykhodko used his garages for welding, soldering and other metal work involving high temperatures, it would have been suicidal to keep inflammatory liquids in the premises.  The other highly incriminating detail is that the FSB ‘found’ the bucket immediately, and then refused to search the second garage.  This is hardly the behaviour of officers searching the home of a potential terrorist, and can only be explained as being that they knew perfectly well that they would find nothing. As in all such cases, the FSB had – illegally – brought their own ‘official witnesses’ with them.

Later that evening, while already in detention, a person claiming to be a doctor took a biological sample from Prykhodko’s mouth.  This was illegal, without a lawyer present, and makes the claim that DNA was found on the alleged ‘evidence’ highly suspect. .

It was only in January 2020, when the defence were finally able to see the case file, that the second, surreal, change emerged. Prykhodko was accused of having planned to set fire to the Russian general consulate building in Lviv, Western Ukraine, with the alleged ‘proof’ of this lying in a telephone and a memory stick.  It was claimed that Prykhodko had a phone call with an unidentified individual from Lviv in Western Ukraine, and that he afterwards discussed, via text messages plans to carry out a terrorist attack on the Russian consulate in Lviv.  Both Prykhodko and his wife denied from the beginning having ever seen either the bucket, or the telephone and memory stick which the FSB claimed to have found.  With respect to the technology, there is considerable testimony from friends and colleagues, confirming that Prykhodko had extremely basic knowledge of how to use either a smartphone or a computer.

All of the above was undoubtedly damning, yet this ‘trial’ was taking place at the same Southern District Military Court in Rostov-on-Don (Russia) which has been involved in most politically-motivated trials of Crimean Tatar and other Ukrainian political prisoners.  In December 2020, Sergei Aidinov claimed that the charges had all been proven and demanded an 11-year sentence and fine of 200 thousand roubles.   The only proof that had been presented in court was of huge irregularities and falsified evidence, yet on 3 March, presiding ‘judge’ Alexei Abdulmazhitovich Magomadov; together with Kyrill Nikolayevich Krivtsov and Sergei Fedorovich Yarosh, found Prykhodko guilty of all charges, however removed the charge under Article 223.1 (preparing explosives) as being time-barred.  As well as the five-year sentence, they imposed a still prohibitive 110 thousand rouble fine.  The sentence will be counted from when Prykhodko was first taken into custody, i.e. 9 October 2019.  It is unclear as yet whether the defence will lodge an appeal.  Prykhodko should undoubtedly have been acquitted, however the chances of this in a case so obviously targeting an opponent of Russia’s annexation are next to nil, and there would be a risk that the sentence would be increased.

Letters send an important message, telling him that he is not forgotten, while also showing Moscow that the ‘trial’ is being followed. Letters need to be in Russian, and on ‘safe’ subjects.  If that is a problem, use the sample letter below (copying it by hand),