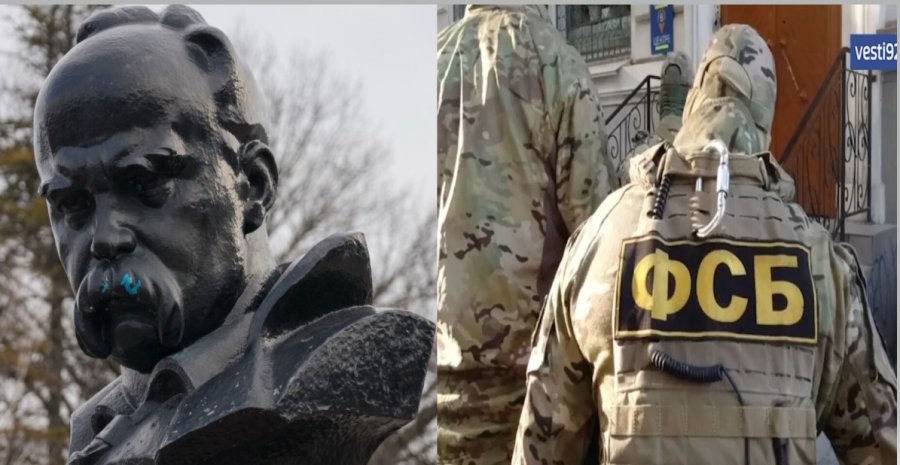 The two Ukrainians who disappeared soon after laying flowers at the monument to Taras Shevchenko in Russian-occupied Crimea were seized by the FSB, with one of them still imprisoned.

Yelizaveta Pavlenko, from Alushta (Crimea) and Vladislav Yesypenko, from Kryvy Rih, in mainland Ukraine, both took part in honouring Shevchenko on 9 March, the 2007th anniversary of the great Ukrainian poet’s birth. Contact with them was lost the following day and Krym.Realii has now learned that the two were both detained by masked FSB officers.  The FSB carried out a search of Pavlenko’s home, with this lasting over eight hours.  They removed technology and personal items, but, as of early on 12 March, Pavlenko was at least not in custody.

Yesypenko was taken away and on 12 March was being held at a police holding unit in Simferopol.  According to his wife, Yekateryna, he is accused under Article 223.1 § 1 of Russia’s criminal code, with this covering ‘the illegal manufacture, adaptation or repair of a firearm or its component parts, or the illegal manufacture of ammunition.  This could carry a sentence of up to five years’ imprisonment, and Yesypenko has been remanded in custody for two months, until 11 May.  Typically lawyer Emil Kurbedinov has still not been able to see Yesypenko, despite his wife having formally asked him to represent Vladislav.

Earlier on 12 March, the FSB claimed to have, in cooperation with Russia’s police carried out operations in a number of Russian cities, as well as in occupied Crimea.  They had, it was asserted, ‘broken up the activities’ of 72 individuals; confiscated 251 illegal firearms and closed down 37 underground workshops for modernising weapons and preparing ammunition.

The FSB in occupied Crimea asserted on 25 December 2021 that they had arrested two residents of Yalta on suspicion of illegally preparing weapons and ammunition.  In April that year, they had reported breaking up a workshop in occupied Crimea and Sevastopol, but gave no details about how many arrests had been made.

Presumably the FSB do, sometimes, fight crime, rather than dissidents, and perhaps there really were such underground activities.

That, however, would not allay concerns about the FSB’s seizure of Yesypenko and Pavlenko and the charges against the former.  They have, after all, targeted two people taking part in an act of remembrance which makes their pro-Ukrainian views fairly clear.  The very long search of Pavlenko’s home, the fact that both Ukrainians disappeared for some time, as well, probably, as the fact that Kurbedinov has not yet been able to see his client, at very least elicit questions about the FSB’s motives, especially given prosecutions of Ukrainians and harassment around the anniversaries of Shevchenko’s birth on 9 March and death in Russian exile 48 years later, on 10 March 1861 since 2015 (

It should be said that alleged findings of ammunition, explosives, etc. have been a part of multiple politically-motivated arrests and ‘trials’ of Ukrainians from occupied Crimea. Virtually all of these political prisoners were recognized by the renowned Memorial Human Rights Centre as political prisoners.