13-year sentence against Belarusian investigative journalist who helped expose crimes against Ukraine Abducted journalist’s life is in danger in Belarus. Not only his while Lukashenko and Putin get away with terrorismRussia and its proxy Luhansk ‘republic’ join Belarus in attack on abducted journalist Roman Protasevich Russia and Belarus boast collaboration on joint hit operations against their ‘enemies’ Ukraine protests after Russian-controlled Luhansk militants join Belarus KGB in torturing Protasevich ‘War on four paws’ — personal battle of Serhii Neboha63 bodies of Ukrainians tortured by Russians already found in liberated Kherson oblast First tortured victims exhumed after Ukraine drives Russian invaders out of Kharkiv oblast village Russia teaches Mariupol children to shoot and to hate Ukraine Conflicting values and conflicting narratives: the case of Russia’s war on UkraineRussian soldiers given long sentences in Ukraine for bombing civilian targets in Kharkiv oblast ‘International institutions must protect Ukrainians from abductions and executions’, Ukrainian SCOsRussian schoolchildren told that Russia is bombing and killing Ukrainian children in ‘self-defence’ Staged Donbas ‘evacuation’ and fake sabotage in Russia’s war against Ukraine. Where are the sanctions?Italian public broadcaster pushes Russian lies about MH17 and war in Donbas Czech sentenced to 21 years for terrorism on side of Russian-led Donbas militants Ukrainians resoundingly dismiss Putin’s claims of ’‘historical unity’ Ukrainian blogger gets 3-year sentence over posts calling for a ‘referendum’ on joining Russia Czech Republic passes record 21-year sentence for terrorism in militant-controlled Ukraine Russia lodges a surreal ECHR inter-state claim against Ukraine over MH17, water for occupied Crimea & 'discrimination'
• Topics / News from the CIS countries 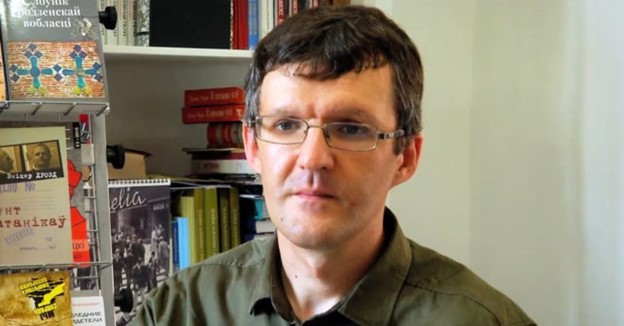 Dzianis [or Denis] Ivashin has been arrested by the Belarusian KGB after exposing the deployment of Russian fighters, involved in Russia’s invasion of Crimea and war in Donbas, as well as ex-Berkut officers, in propping up the regime of Aleksandr Lukashenka. The investigative journalist and editor of the Belarusian branch of InformNapalm has been charged with ‘interfering in the activities of police employees’ (under Article 365 of the Belarusian criminal code).

The KGB arrived at Ivashin’s home in Grodno in the evening of 12 March, two days after the journalist gave an interview to Current Time in which he spoke of his investigation into the deployment of ex-Berkut officers and about how he had provided information about them to Ukraine’s Security Service.  According to his wife, Olga,  although the charge is, in theory, one of divulging personal data, the KGB were particularly interested in everything linked with Ukraine. They searched both their flat and dacha, removing all electronic devices; sim-cards; books; notes, etc. removed.  Ivashin has himself been remanded in custody for two months.

Ukrainian human rights activists report that Ivashin was born in Belarus, but has Ukrainian roots and supported Ukraine in his struggle against Russian aggression.  Despite the clear danger he faced because of his journalist investigations, he had always refused to leave Belarus.

The timing suggests that Ivashin was arrested because of three important pieces of investigative journalism.  These identify Russian military servicemen and special units from Rosgvardia [the Russian Guard, created by Russian President Vladimir Putin]. deployed in the invasion of Crimea and military aggression in Donbas, and now moved to help the Lukashenka regime, as well as former Berkut officers.  Although Current Time’s interview concentrated on the third part of Ivashin’s investigation which was entirely about ex-Berkut officers in the Belarusian repressive organs,, the three articles published on 28 October 2020; 23 December 2020 and 4 March 2021 are all likely to have riled the regime, and, quite possibly, Moscow.  The first of the articles, after all, published three months after Lukashenka began his most savage crackdown to date on Belarusians demanding democracy, is entitled: ‘What are military men who occupied Crimea and Donbass doing in Belarus?’.   Ivashin points out that military competitions and manoeuvres are being used as a pretext for deploying Russians with considerable combat experience gained during Russia’s aggression against Ukraine, as well as Rosgvardia special force units.  He mentions, for example, joint exercises, called ‘Indestructible Brotherhood 2020, by the Collective Security Treaty Organization held in Belarus from 12-16 October 2020.  These were headed by CSTO Head, Colonel-General Anatoly Sidorov, whom the Ukrainian Myrotvorets has labelled a war criminal for his commanding role in military aggression against Ukraine during the spring and summer of 2015.

During the interview, Ivashin explained that they were aware of more than 10 former Berkut officers, including one woman, most of whom are now working for the Belarusian OMON, or ‘riot police’.  He points out that the Ukrainians had received Belarusian citizenship, although there were no grounds, and their work for another country’s enforcement structure should have been an impediment.  This, in fact, has been true also of all the Berkut officers who fled to Russia.  Those now in Belarus hold various posts, with one  - Ihor Zapalukh – the deputy commander of an operational-combat unit.  He is now a sniper, as he was in the Mykolaiv Berkut in Ukraine. The list includes three former captains among them: Serhiy Havryliak and Dmytro Antsupov from the Mykolaiv Berkut and Serhiy Kiminchyzhi from the Odesa branch.

Although he is not aware of any of the Berkut officers facing criminal charges in Ukraine, Ivashin says that he has referred a formal request for information to the Ukrainian enforcement bodies and SBU. He openly states that the SBU should be interested in these individuals, since at least some may have been involved in the ‘Red Regiment’ under commander Dmytro Sadovnyk which is believed to have taken part in gunning down activists in February 2014.

Dzianis Ivashin has carried out invaluable work as an investigative journalist and through his support for Ukraine, and he now needs our voices in his support.