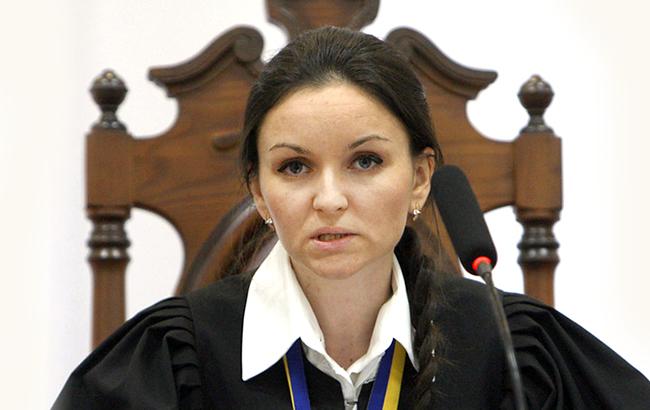 Ukraine’s Supreme Court has revoked a presidential decree dismissing one of the most notorious of Kyiv judges, involved both in politically motivated trials under President Viktor Yanukovych and in persecuting Automaidan activists.  This is the second of two controversial rulings regarding Oksana Tsarevych over the past year and is especially shocking since Tsarevych will not only be reinstated, but could be in line for huge compensation.

The ruling on 17 March revokes a decree issued by former President Petro Poroshenko on 29 September 2016.  This dismissed Tsarevych from her post as a judge of Kyiv’s Pechersky District Court, citing infringement of her oath as the grounds.  The move was based on a submission from the High Council of Justice which stated that Tsarevych had shown bias in examining nine cases involving drivers who had taken part in Automaidan protests in December 2013.

The DEJURE Foundation points out that two of the three judges from the Cassation Administrative Chamber responsible for this extraordinary ruling were appointed to the Supreme Court back in 2018 despite having received negative assessments from the Public Integrity Council.  In its assessment of Valentyna Yurchenko, the Council noted that back in 2016, she had been involved in protecting another judge, Serhiy Poida. who, in January 2014, had remanded Maidan activists in custody.  Yurchenko was part of the panel of judges who revoked a submission from the High Council of Justice for Poida’s dismissal.

Svitlana Pasichnyk earlier worked in the High Administrative Court and was part of the panel of judges who banned Ukrainians from exercising their right to peaceful assembly in the centre of Kyiv in November 2013.

The DEJURE Foundation believes that this ruling could open the way for Tsarevych to demand millions in ‘compensation’ for the time she was prevented from working as a judge at the Pechersky District Court.

Tsarevych played a role in Yanukovych’s persecution of his main rival, Yulia Tymoshenko and two people in her government (Yuri Lutsenko and Valery Ivashchenko).  It was, however, over the prosecution of Maidan activists that President Poroshenko dismissed her in 2016 and criminal charges were laid against her.

After the Automaidan car procession on 29 December, 2014 to Yanukovych’s opulent, secretive and illegal residence at Mezhyhirya and the sumptuous homes of others in high positions, Maidan activists and journalists who took part received visits from traffic police officers, or invitations to come to the police station for a “chat”.  Traffic police protocols, were then used by the court to deprive activists of their licence for 3 or 6 months. Although the prosecution accused Tsarevych over four cases, she had ordered the suspension of nine driving licences.

There were witnesses confirming that the charges were fabricated, as well as evident infringements.  Roman Maselko, who was representing the Maidan activists stripped of their licences, back in July 2015 gave a detailed account of all the cases, the infringements in each, including the total failure to consider evidence that the protocols were faked and that the people prosecuted and stripped of their licences had been somewhere else altogether.

Tsarevych was acquitted of having passed knowingly unlawful rulings (Article 375 of Ukraine’s Criminal Code) on 30 June 2020 by judge Yevhen Martynov from the Shevchenkivsk District Court in Kyiv, Although the acquittal was essentially inevitable following the recent judgement by Ukraine’s Constitutional Court which ruled that Article 375 was unconstitutional, there was considerable anger that the trial had been dragged out over almost five years.

The prosecution had asserted that Tsarevych consciously passed the wrongful rulings  “trying to show loyalty to the regime in order to get benefits and promotion”.  Martynov, however, claimed that the prosecutor had not presented enough proof that Tsarevych had knowingly issued wrongful rulings.  The fact that three out of four rulings had been revoked at appeal level did not prove anything, he said, since new evidence had been presented during the appeal hearing.  ProSud, the Automaidan project on monitoring Ukraine’s judiciary, noted that the court had questioned a traffic inspector who confirmed that the reports which were used by Tsarevych to convict the four victims were faked. The ProSud activists were, however, critical of the prosecution for sabotaging the case by not calling key witnesses, such as court workers who could have confirmed how cases were handed to Tsarevych through intervention, overriding the supposed automatic system for distributing cases.  The same selective distribution of certain cases was evident with respect to trials of former members of Tymoshenko’s government.

According to a report produced by ProSud in February 2019, 227 Ukrainian judges involved in jailing badly beaten Maidan activists; in banning perfectly legal protests; in stripping Automaidan activists of their driving licences, etc., remained in their posts.  Those very few judges who were held to answer, like Tsarevych, can now, it would seem, hope to be reinstated, if not also generously compensated at the taxpayers’ expense.