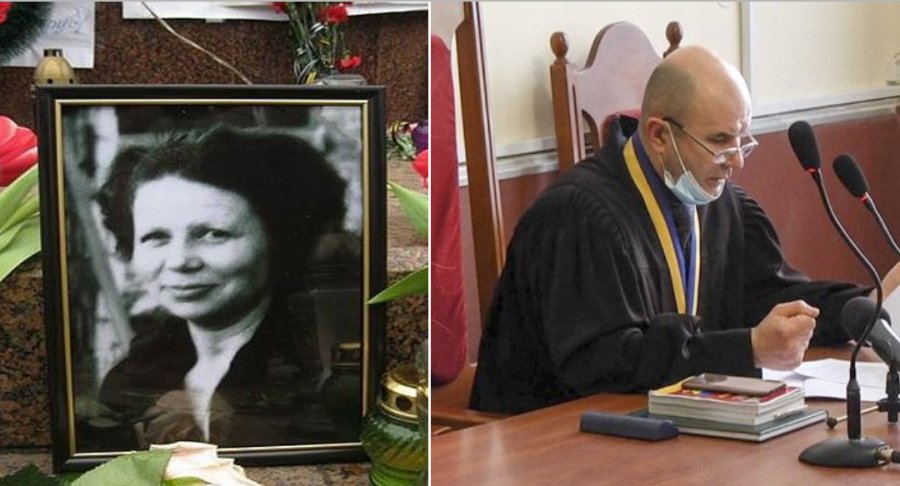 After seven years of effective sabotage, the trial of two men over the killing of 72-year-old retired anaesthetist and  Maidan activist Lyudmila Sheremet may finally be moving.  The fact that the elderly woman was killed by gunfire from inside the Khmelnytsky Security Service [SBU] building should have made the investigation relatively straightforward.  The opposite has proven to be the case, and there seem legitimate grounds for suspecting high-level efforts to obstruct the course of justice.

A year and a half after the case was passed to the Khmelnytsky Town and District Court, the latter has begun examining the written evidence for the prosecution.  While such a pace hardly inspires confidence, change is almost certainly on the way. On 12 March,  at the request of the victims or their families, Judge Oleh Antoniuk announced a new group of prosecutors, or, more precisely, reinstatement of the prosecutors from the old Special Investigations Department who had previously achieved progress before the case was again taken out of their hands.

The two men facing charges are Viktor Kraitor, former head of the Khmelnytsky SBU, who is accused of having given the order to open fire, and Vitaliy Taradai, an SBU Alpha special force officer, suspected of having fired the fatal shot.

Kraitor was briefly in custody after the shooting on 19 February 2014, for which he publicly took responsibility.  He was released early in 2015, and his status changed from suspect to witness.  The case was under the military prosecutor’s office which, later in 2015, terminated the criminal investigation with respect to Kraitor.

There were repeated demands from the victims and complaints from their lawyers.  These finally led in 2017 to the case being passed to a team of prosecutors, under Yulia Malashyts  from the Special Investigations Department, essentially the only body that achieved real results in investigating Maidan crimes.

In August 2017, the head of this Department reported that the military prosecutor’s office had ‘lost’ the only undamaged bullet from the crime scene which would make it possible to determine whose weapon was used in the shooting of unarmed protesters.  He said that the internal investigation that his team had demanded into how this could have happened had been passed by the Prosecutor General’s Office to the same prosecutor’s office that had ‘lost’ the bullets.  He was openly sceptical of the military prosecutor’s claim that the shots had been fired by one of the Maidan activists who had managed to get into the  SBU building. This ‘version’ was roundly dismissed by Yevhenia Zakrevska, one of the lawyers representing the families of slain Maidan activists.  She considered it to be part of the sabotage from the military prosecutor, aimed at blaming Maidan activists for the death and injuries that day, not the SBU.

Although some activists did get inside, they can be seen in the video here trying to open the locked doors, whereas the shots came from the door panel to their right (https://youtube.com/watch?v=Nl5_cZtOg5M ).

The more likely explanation was seen as being that the shots had been fired by SBU officers on the ground floor and that the shots went through the door and ricocheted on the granite balustrade, then hitting Ludmila Sheremet and others.

The logbook registering issue of weapons was also ‘lost’, supposedly when the SBU building was set alight on the evening of February 19, 2014, although a lot of other, less incriminating, material was saved from the flames.

It was the Special Investigations Department who concluded that the fatal shot had been fired by Taradai, with the latter informed that he was suspected of murder on 23 June 2018.  At the time, the SBU spokesperson Olena Hitlyanska called the charges unfounded and the case ‘fabricated’.  She went on to suggest that Horbatyuk’s department was “trying to conceal its ineffectiveness”.

Hitlyanska mentioned that the SBU Head Vasyl Hrytsak had spoken on the subject with the then Prosecutor General Yury Lutsenko.  This is of particular concern since in August 2018, Lutsenko took the case away from the Special Investigations Department, handing it back to the military prosecutors who had ‘lost’ critical evidence.

LB.ua journalist Sonya Roy reports that this move aroused outrage from the victims, and the case was returned to the Special Investigations Department.  The procedural management was, however, left with the military prosecutor’s office.

Taradai had been placed under house arrest on 21 December 2018 and only until 8 January 2019.  The judge from the Podilsky District Court in Kyiv had rejected the prosecutor’s request for Taradai to be remanded in custody.  Even this house arrest was cancelled on 3 January 2019 which those with victim status only learned of post-fact.  The court cited evidence that Taradai had been sent to the Luhansk oblast from 10 June to 20 December 2018 as justification for removing the house arrest.  The argument was that, although the Department for Special Investigations had summoned Taradai for questioning and then placed him on the wanted list when he did not appear, the SBU officer had not, in fact, been in hiding, but on a work-related trip. Prosecutor Ihor Kalinin  pointed out that Taradai had been summoned and not appeared, supposedly due to illness, before he was sent on this work trip to the Luhansk oblast. There had been no good reason for the SBU to have spent a person facing serious criminal charges.  Kalinin then noted that the military prosecutors had unwarrantedly removed the most serious charge against Taradai under Article 121 of the Criminal Code (causing grave bodily injuries), leaving the lesser charge of causing bodily injuries and manslaughter.

The military prosecutor’s office sent the cases to court separately, with the trial of Kraitor beginning in October 2019.  Both cases were, however, merged by the court in February 2020.

As well as circumstances, linked with the pandemic, there were also three changes in the make up of the prosecutors’ team, with all of this meaning that no progress was made for over a year.

The last change reinstated Yulia Malashych’s team of prosecutors.  She immediately allayed concerns expressed by Judge Antoniuk that another change would lead to further delay by expressing determination to (finally) keep to a reasonable timeframe.  She put this in action immediately by reducing the list of planned witnesses for the prosecution from 200 to just 20, and named 75 elements of evidence, to avoid having to examine all 50 volumes in the case.  Kraitor’s lawyer objected to any such reductions, and asked for a further delay in order to acquaint herself with the proposed list of evidence.  In view of so many delays (and presumably the fact that the list merely selected certain evidence, rather than adding anything new), the court decided to continue.

The hearings scheduled for 24 and 25 March have had to be cancelled because of quarantine restrictions, however, the court has already had a chance to learn how much ‘was lost’ during the ping-ponging of the case back and forth from the military prosecutor’s office, with this including, not only the bullet, but also video and photo footage and appendices to the protocol.  Zakrevska is convinced that three years were effectively “stolen” by Lutsenko, but is optimistic now that, as she puts it, “prosecutors have appeared in the case, and not a free addition to the defence.”

Lyudmila Sheremet was married with a daughter and granddaughter.  Four other people were also shot, but survived, although one young man had his leg amputated. At around 20.00 that evening, Dmytro Pahor was shot dead, with a Makarov pistol, outside the SBU building.  He was just 21.