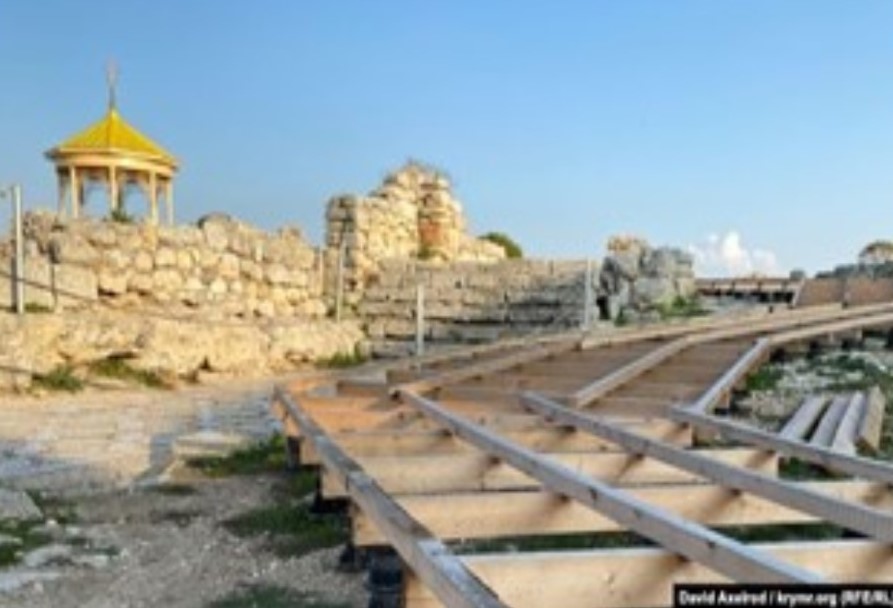 The ruins of the ancient city Tauric Chersonese near Sevastopol, recognized by UNESCO, as a site of world heritage, are being systematically destroyed under Russian occupation.  While incompetence and greed for Russian state funding may be part of the reason, some of the ‘innovations’ are clearly also aimed at pushing the current Russian regime’s attempts to link occupied Crimea with Russia, and to try to legitimize its internationally condemned land-grab.

Anatoly Tumanov, a conservator-restorer from Sevastopol who earlier did restoration work for the Chersonese museum reserve has lodged a civic suit against the management of Chersonese and the Russian foundation ‘My History’.  Although there have been concerns about the structures being erected at the site, and the damage these caused, the suit is over a so-called historical reconstruction entitled ‘Panorama Chersonese’.  On a World Heritage List site, containing the ruins of an ancient city founded by Dorian Greens in the 5th century BC, the Russian occupiers in 2018 erected a round ‘sculptural composition’ made out of concrete.

The Russian-installed management, under Yelena Morozova, claim that they received an expert opinion asserting that there were no significant constructions, etc. in that (eastern) part of the site.  Tumanov and other civic activists do not agree and are promising several legal battles.  In the suit he has just lodged, Tumanov says that the concrete construction is not only an eyesore but also destroys the cultural layer of the ancient city and is demanding that it be removed.

It is hard to imagine that UNESCO would not agree that this concrete structure at very least threatens the authenticity and integrity of the site.  The problem, however, is that UNESCO, while monitoring the situation, is unable to monitor in situ.  UNESCO need only agree a time with the Ukrainian authorities which poses no problem.  Russia, however, is demanding that the people from UNESCO ‘agree’ their visit with them, which is an unacceptable demand for any UN or other international body.

There have been other ‘innovations’ damaging Chersonese, and many are ongoing.  Tumanov explained in an interview to Krym.Realii that he had chosen ‘the concrete panorama’ as it will be the hardest for them to try to justify.

“They can’t get out of this one.  In the place where they’ve erected this construction, there was an ancient road which served as an alternative entrance to the city.  This territory is, therefore, obviously very important for Chersonese, important for research. And they’ve put up a huge major structure made out of concrete”.

The management of Tauric Chersonese reject this, and claim that ‘protective excavations’ were carried out before they began the construction and that these ascertained that “there is no cultural layer” on that land. They assert that the layer of earth where the ‘panorama’ now stands was formed after the results of earlier excavations from the end of the nineteenth to the beginning of the twentieth century were taken away.

Tumanov is dubious about this, but points out that any road from that time is in itself the cultural layer.   The only way he can explain the management’s assertion is that by the supposed lack of a cultural layer, they mean that there are no constructions at that site.

He is by no means alone in opposing the changes being made, under Russian occupation, to Chersonese.  A petition on Change.org, entitled “SOS!  Save Chersonese from barbarians!’ has so far been signed by over 2,600 people.

In October 2020,  the management of the Chersonese museum reserve began erecting new wooden and metallic constructions  claiming that this was part of the work on ‘improving’ the reserve. There was a lot of opposition to constructions seen as destroying the spirit of Chersonese, in particular a stage, erected not far from the central entrance and log paths, fixed to a metal body and running between the ancient stone ruins. and harming its scientific potential.

Criticism has largely been ignored, with the response from the deputy head of the museum reserve. Tatiana Sarapulkina being that the project had been agreed with Russia’s ministry of culture and had a positive expert opinion.

Tumanov and other civic activists are planning a collective law suit, and hope to lodge other suits in the future.

If the first major problem lies in Russia’s occupation and its blocking of UNESCO monitoring, the second is the uses for ‘Russian World’ ideology being made of Chersonese and the St. Vladimir Orthodox Cathedral built nearby in the second half of the nineteenth century and rebuilt by independent Ukraine following its destruction in the Second World War.

Tumanov worked at Chersonese until 2017 when he left out of opposition to the changes being introduced by Morozova and her people.  In 2019, he complained that under Russian control, the museum reserve was being run, not by scholars, but by “some kind of people with the words ‘Russian Foundation – my history’ on their backs”.  He said that these individuals do whatever they please and clearly have no idea where they are, as seen by how they prop metallic fencing against ancient walls.

Some of this is about cheap propaganda, such as the elaborate event with lights and special effects at the site for the latest illegal visit to Crimea in August 2019 of Russian President Vladimir Putin.

It was around that time that plans were first reported of a ‘museum of Christianity’ at the site, or even of an Orthodox monastery.  The ideas were put forward by Metropolitan Tikhon (Shevkunov) of Pskov and Porkhov, who is officially Putin’s ‘confessor’ and  shares Putin’s ‘Russian world’ ideas.

All of this is part of Russia’s attempt to treat Crimea’s history is a part of its own and to push the importance of Volodymyr’s baptism in Chersonese, although for centuries nobody questioned that the mass baptism that marked the Christianization of Kyivan Rus in 988 took place in Kyiv.

The Russian Foundation ‘My History’ hype about the plans for ‘a historical-archaeological park’ at Chersonese makes the political and propaganda objectives more than clear.

“Implementation of the above program will assure the flow to Crimea of numerous pilgrims and tourists from all over Russia and countries of the ‘near’ and ‘far abroad’. It will give a powerful impulse to the development of Sevastopol and all of Crimea; will make it possible to turn this most important region into a spiritual, cultural and scholarly-educational centre of the south of Russia [sic]. Widespread public representation of Chersonese as a national, sacral centre of Russia will make it possible to form in the international information field a clear and unequivocal understanding of the fundamental significance of Crimea as the historical baptismal font and inalienable part of the Russian state”.

This attempt to distort history will likely lead to Chersonese being taken off UNESCO’s World Heritage List, but is most unlikely to achieve any change in the current, unequivocal understanding that Crimea is a part of Ukraine under illegal Russian occupation.

The text makes it very clear that this barbaric destruction of Chersonese was initiated by Putin in 2017, with his focus on the supposed “need to develop Chersonese as a Russian historical centre linked with the formation of the Russian nation and a single Russian state”.

On 15 December 2017, Russia’s ministry of culture, in cooperation with the Patriarch (of the Russian Orthodox Church) drew up a ‘roadmap’ for this ‘park’, with ‘My History’ in charge of this project.

Tumanov believes that the people now in charge at Chersonese, including the director, Yelena Morozova, are protégés of Tikhon Shevkunov’s ‘church lobby’. Morozova is a Russia who was previously in charge of ‘Russia – My History’ exhibitions which are believed to be under the control of Tikhon.

Almost four years after that fateful ‘roadmap’ was set in motion, Tumanov says that the modern constructions that now mar the site have destroyed its authenticity and made Chersonese unrecognisable. Natalia Isayeva, a journalist from Sevastopol, told Krym.Realii of her shock on seeing Chersonese after a year and a half.  All the “incomprehensible wooden planking”, the observation areas, etc. are all like kitsch.  “I get the impression that the people who developed and built this grew up in a back-of-beyond village and have little idea of culture, aesthetics, and antiquity in general.”   She points out that Chersonese are ancient ruins, like those in Greece.  Only in Greece you don’t have plaques drilled into ancient ruins, and here she counted thirty such plaques.   There is no other word for this, she says, but barbarism.