Outrage as Ukraine’s Culture Minister allows synagogue to be built on graveyard at Babyn Yar Russian oligarch plans for Babyn Yar seem aimed at fuelling anti-Semitism in Ukraine Contentious choice of Babyn Yar Holocaust Memorial Complex is a win-win situation for RussiaHow can a Russian oligarch control remembrance of the Victims of Babyn Yar in Ukraine?Babyn Yar: "Did the sun really not pale at the sight of that horror? "How can Ukraine’s leaders hand Babyn Yar into private Russian hands? Ukrainian civic journalist was ‘voluntarily’ abducted, asphyxiated and beaten by Russian FSB‘My mom wanted to take poison, but she learned from a letter that we were alive.’ The story of a doctor from Mariupol, part 2Mariupol, an Example of GenocideOksana Stomina: This is medieval cruelty, multiplied by modern possibilities and sick, maniacal ambitions22 journalists killed since Russia began its total war against UkraineMass grave near Mariupol could contain up to nine thousand victims of the Russian invaders Over 60 places of worship in Ukraine, as well as sites of cultural heritage, have been attacked by the Russian invaders, with some totally destroyedRussian invaders kill 96-year-old Ukrainian Holocaust survivor Russia has already greatly surpassed the Nazi Third Reich by insidiously launching missile and bomb attacks on UkraineUkrainian survivors of the Holocaust demand Putin and Russia get out of Ukraine Babyn Yar bombed by Russia, 80 years after Nazi Massacre of Ukrainian Jews Сьогодні – 80-та річниця трагедії Бабиного ЯруБабий Яр, или Память о том, как в народ превращалось строптивое племяФонд «Бабин Яр» закликає припинити підтримку російського проєкту меморіалізації
• Topics / Victims of political repression 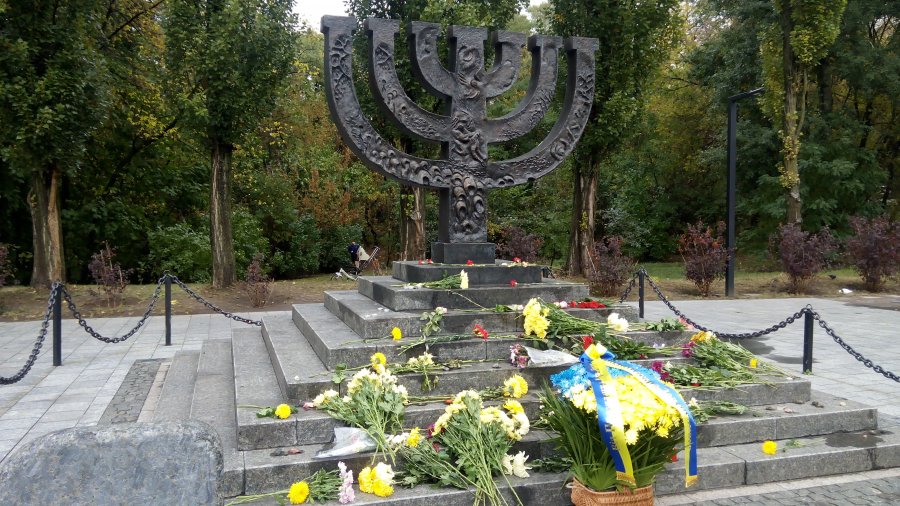 A suit has been lodged with the District Administrative Court in Kyiv against extremely contentious moves to build a synagogue on the site of the former Kyrylivske Christian Orthodox graveyard behind the Menorah at Babyn Yar.  The court reported on 29 March that the suit is asking for the construction work to be banned, and it is currently considering whether there are legal grounds for issuing a writ, which would temporarily suspend any further work, pending its ruling.  Since construction work is already underway, and appears to go much further than originally agreed, a decision would seem urgent.

The legal challenge has been launched by the Babyn Yar International Memorial Charitable Foundation against the Ministry of Culture which allowed the construction. The Babyn Yar Holocaust Memorial Complex, which is carrying out the construction work and which is viewed by very many prominent opponents, as a private ‘Russian project’, is named as third party.

Josef Zisels, Co-President of the Vaad, or Association of Jewish Organizations and Communities of Ukraine and former Soviet dissident, is one of the most prominent opponents to the Babyn Yar Holocaust Memorial Complex [BYHMC] and supports the alternative Ukrainian project for memorialization of the victims of Babyn Yar.   One of the key differences between BYHMC, which Zisels considers to be a divisive Russian project, and the project prepared at the request of the Ukrainian government is that the BYHMC complex would build on Jewish, Kyrylivske Orthodox and Karaim graveyards.  In a recent appeal against the BYHMC project, it is stressed that the Ukrainian project for comprehensive memorialization of Babyn Yar “does not envisage any fundamental construction work on the land where there were Orthodox; Jewish; Karaim or Muslim graveyards, and where the last remains are buried of tens of thousands of victims of the Nazi executioners.”

“Jewish religious tradition unequivocally prohibits any construction on the sites of graveyards and mass burials. The attempt to build a synagogue on the land of an Orthodox cemetery is an affront to Jewish spiritual and moral values, as well as overt provocation against Orthodox Christian believers, against all of those whose relatives lie buried at the Kyrylivske Cemetery.”

It became clear in November 2020 that BYHMC was planning to build a synagogue behind the Menorah at Babyn Yar and had asked the Ministry of Culture for a permit.  The construction was to be finished in time for the eightieth anniversary in 2021 of the Babyn Yar Massacre on 29-30 September 1941 when over 33 thousand Jewish adults and children were murdered, with their bodies thrown into what was then a ravine on the outskirts of Kyiv.  Despite the outrage that the plans elicited, and the very clearly articulated warning from Ukrainian Jewish figures that the construction at that site looked like deliberate provocation, aimed at inciting anti-Semitism in Ukraine, excavation work began on 25 December 2020.  Then on 22 January 2021, it was learned that, contrary to commitments given, Ukraine’s Culture Minister, Oleksandr Tkachenko, had issued permission for the work.

In an interview on 31 March, Zisels explained the key issues behind opposition to the planned construction of a synagogue and the law suit.  He began by stressing a pivotal point, namely that the land in question is not only that of the former Kyrylivske Orthodox Graveyard, but is also part of the Babyn Yar National Memorial Reserve.

There had, moreover, been a very clear message from Ukraine’s Security Service to the Prime Minister Denis Shmyhal and Ministry of Culture regarding possible attempts, including from the Russian Federation, to use the Babyn Yar Holocaust Memorial Centre to discredit Ukraine.  The SBU officials specifically warned of the likely inter-ethnic and inter-faith tension that could arise over the BYHMC plans to build a place of worship on the territory of a former graveyard. The SBU had recommended adoption of the Ukrainian project instead.

According to Zisels, Minister Tkachenko did take the SBU advice into account for some time and hold out against giving permission for the building.  Until, that is, two meetings at the Office of the President on 22 January, one of which was chaired by President Volodymyr Zelensky..

Zisels cites just some of the Ukrainian and international laws (on cultural heritage, on burial sites, etc.) that the Minister of Culture has broken by giving this permit.  He points out also that “everything that can be violated, has been”.  BYHMC applied for a permit to build a so-called ‘small architectural structure’.  There are very strict guidelines in Ukrainian legislation for what such ‘structures’ can be.  They must be movable; cover an area of no more than 30 m² and be no more than four metres high.  BTHMC has also called the construction ‘A Place for Contemplation’ to avoid using the term ‘synagogue’.  What is being built now is on a concrete foundation and very evidently not movable.  It will also be taller than the four-metre limit.

It is telling that two listeners phoned in to the radio program while Zisels was speaking, both clearly angered by the plans.  The first person asked rhetorically why a Jewish synagogue had to be built on an Orthodox cemetery as though no other land in Kyiv could be found.  The second insisted that if a synagogue is to be built at Babyn Yar, there should also be places of worship for all other groups murdered at the site.

These, it should be said, are absolutely predictable reactions, ones which the SBU doubtless foresaw, but which President Zelensky, in his stated support for BYHMC, is bafflingly willing to disregard.

Zisels himself calls this a ‘super provocation’ and is quite certain that those Russian billionaires funding this project are counting on just such troubles.  He believes that radical elements have already been paid to set the synagogue alight, with this just the sort of image of Ukraine that Russian President Vladimir Putin wants to see created.

It should be noted that Josef Zisels and Vaad played an invaluable role, particularly during the first year of Russia’s aggression against Ukraine, in exposing the Kremlin’s lies and attempts to fake ‘rampant anti-Semitism’ in Ukraine.  They and other Ukrainian Jewish figures were hugely instrumental in alerting the international community to the kind of dirty propaganda warfare which the Kremlin was funding.

It is therefore immensely frustrating that their warnings are now being ignored.

There are other concerns about the BYHMC, not least the likely role to be played by an extremely controversial Russian art director, Ilya Khrzhanovsky.

He is known to have the support of the main financer of this essentially private project, namely Mikhail Fridman, a Russian billionaire known for his success under Putin’s regime.  There were almost humorous, if cynical, attempts, following the initial appeal regarding the need to stay with the Ukrainian project, to turn three very rich Russian businessmen (Fridman; German Khan and Pavel Fuks) into ‘Ukrainians’, on the grounds that all were born in Soviet Ukraine.  In fact, all of them made their money in Russia, with only Fuks having, reportedly, severed his business interests in Russia because of the latter’s aggression against Ukraine.  In 2018,  Fridman, the main sponsor, was reportedly placed by the US State Department on a list of figures with ties to the Kremlin.

Josef Zisels was one of the initiators of what began as a Second Appeal of Ukrainian Jews to Ukraine’s Civil Society in support of the Ukrainian project for the memorialization of Babyn Yar, following the first such appeal, summarized in English here. It has now, in fact, become a general appeal, and can be endorsed by leaving your name here.   The signatories express their support for the need “to honour the memory of the tens of thousands of Jews and people of other nationalities and faiths killed by the Nazis at Babyn Yar during the Second World War. The best representatives of our and other peoples have struggled for this over many years. However it is not a matter of indifference how and at what a price this idea is brought to life. We consider any solution to be inadmissible and impossible if it envisages construction work on the sites of cemeteries and places of mass burial, this runs entirely counter to Jewish and general human tradition and morality. We therefore support the Ukrainian project for comprehensive memorialization of Babyn Yar which does not envisage any fundamental construction work on the land where there were Orthodox; Jewish; Karaim or Muslim graveyards, and where the last remains are buried of tens of thousands of victims of the Nazi executioners.” 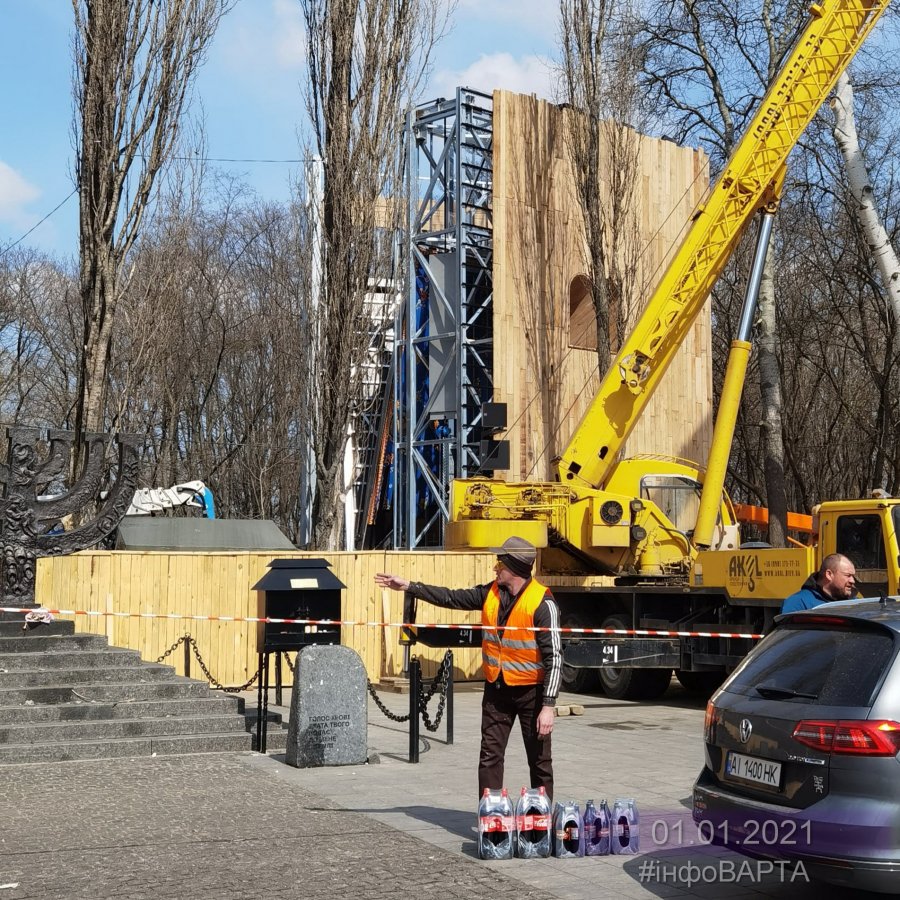