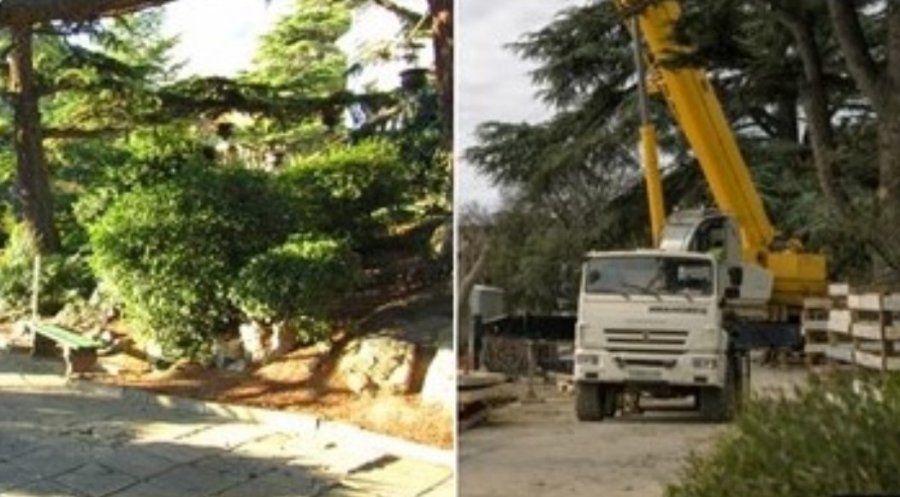 Century-old trees have been felled in the barbaric destruction now underway of the renowned Foros Park in Russian-occupied Crimea.  Secrecy around the construction work appears to be because the ‘owner’ of at least part of this plundered Ukrainian national park needs to hide its activities on illegally occupied territory.  22% of the shares in the Russian oil company, TatNeft are owned by the Bank of New York Mellon  If the authors of a report by the Centre for Journalist Investigations [CJI] are correct, then TatNeft should certainly be under US and other sanctions and its American shareholder is probably in violation of US legislation.

The Foros Park was first founded in 1834, with the huge number of trees and plants from Europe, the American and African continents planted around 50 years later. Until the present devastation, the area of 70 hectares boasted over 200 species of trees and bushes.  Until Russian occupation, the park itself had protected status as a park of national significance.

Krym.Realii reports that the devastation began in the autumn of last year.  There had been no public hearings, no warning, and no designs have been shown.  There are merely claims from the Foros sanatorium that everything is legal and part of ‘reconstruction’ work, and from the occupation regime that it has all been agreed, and that ‘new trees’ will be planted.

Local residents are up in arms and dismiss the suggestion that the huge digging and other heavy equipment deployed at the site are merely doing ‘reconstruction’ work.  They do not believe that the felled and damaged trees will be replaced, nor that the construction work is to build a children’s sanatorium, the second version, after it was claimed the construction work was to build a children’s camp.  Why, Maria Alinova, one of the angry residents of Foros asks, are they building six- or eight-storey corpuses of a hotel if this is supposed to be for children?  Alinova believes that this is going to be a closed-off settlement with cottages.

A petition calling for Foros Park to be saved and for an end to the work underway has been signed by close on 13 thousand people. Concerned residents also addressed an appeal to Russian President Vladimir Putin.

In the latter, they point out that the tree-felling is in full swing, with trucks taking away the destroyed Lebanon cedars, magnolias and juniper trees. The appeal states that while they are recording it, yet another tree is being cut down, and yet another metre of fencing erected.

When asked by journalists, Putin’s press secretary Dmitry Peskov made vague noises about this being important and how they would turn to “the leadership of Crimea”.  The Russian-installed Crimean ‘leader’, Sergei Aksyonov did run about the site a bit, assuring people that everything was legal, and that there was no problem with the felling of century-old trees as others would be planted.  He appears to have claimed that a children’s camp was being built and that the fence was required according to Russia’s ‘anti-terrorism’ legislation.

Another reason for doubting any will to heed Crimean residents’ outrage (not to mention international law) is that one of the most vocal protesters, and reader of the address, teacher, Marina  Rikmen has already received a ‘prophylactic’ telephone call from the police, and knows that her school has also been approached about her.  All of this, and acts of harassment against other protesters, are typical terrorization tactics in occupied Crimea, aimed at silencing protest.

The Centre for Journalist Investigations has been following and reporting on how Russian officials and oligarchs have been ‘buying up’ and gaining control of stolen Ukrainian land since 2016.  In their recent analysis of how high-ranking officials from Tatarstan (RF) “are colonizing the Crimean coast, Valentina Samar and Nikita Panasenko  noted that corrupt dealings by Ukrainian officials did set the scene for the subsequent ‘colonization’ by corrupt Russian players.  This, however, was without the shocking destruction that is now part of Russia’s treatment of many parts of Ukrainian natural and cultural heritage: Hansaray, or the Khan’s Palace in Bakhchysarai; the ancient ruins of Tauric Chersonese and Foros Park. Before Russia’s invasion and annexation, the land on which the sumptuous ‘Tesseli dacha’ and the Foros Sanatorium stood were not sold.  This was prohibited by law since the land was part or a protected park conservation area, and any buildings were designated for sanatoria which could only be leased out, not sold  It was Russia who changed that.

On 23 March 2021 Ukraine’s Prosecutor for Crimea and Sevastopol initiated criminal proceedings over the appropriation of private and state property and the destruction of the Foros Landscape Park.  As with all other such illegal ‘purchases’, these will have no legal validity once Russia’s occupation of Crimea ends, but much of the damage will either be very long-lasting or simply irreparable.

In 2016 the Foros sanatorium was illegally ‘sold’ to the Federation of Trade Unions of Tatarstan, after a staged ‘auction’ in which the two ‘bidders’ were bodies with close clinks to TatNeft.  They also had links to each other, since the Federation was represented by lawyer Rustem Vakhitov, who supposedly beat the stock company ‘Akar’ whose co-owner and director is the lawyer’s father, Rostislav Vakhitov.

One of the experts CJI interviewed noted that it was simply absurd that others had not bid for what was a highly attractive and lucrative piece of real estate.

The ‘Federation’ officially paid less than 1.5 billion roubles with its head, Tatyana Vodopianova openly saying that that Federation had essentially just carried out the purchase, with those behind it being large companies, including the largest of these, TatNeft.  She was very soon to face criminal charges, probably as punishment for her openness.

RBC.ru wrote back in 2016, citing its own source close to the government of Russian Tatarstan, that the Federation of Trade Unions had been used to ‘buy’ the sanatorium so that TatNeft could avoid European sanctions.  It claims to have nothing to do with either the sanatorium or the disastrous development work at the park.

CJI has described all of the machinations and deals in detail, and there certainly do appear to be very strong grounds for disputing TatNeft’s denial of involvement.  This would suggest that international sanctions should be applied against TatsNeft and that the Bank of New York Mellon might do well to consider whether it wishes to be associated with a Russian oil company openly breaking international law through its dodgy dealings and barbaric treatment of a priceless site of natural beauty  in occupied Crimea.

Earlier photos of Foros Park and its exquisite beauty can be found here:

The Krym.Realii video is in Russian but the photos of the ‘reconstruction’ work speak for themselves. https://www.youtube.com/watch?v=Tl-rIl3ZAAw