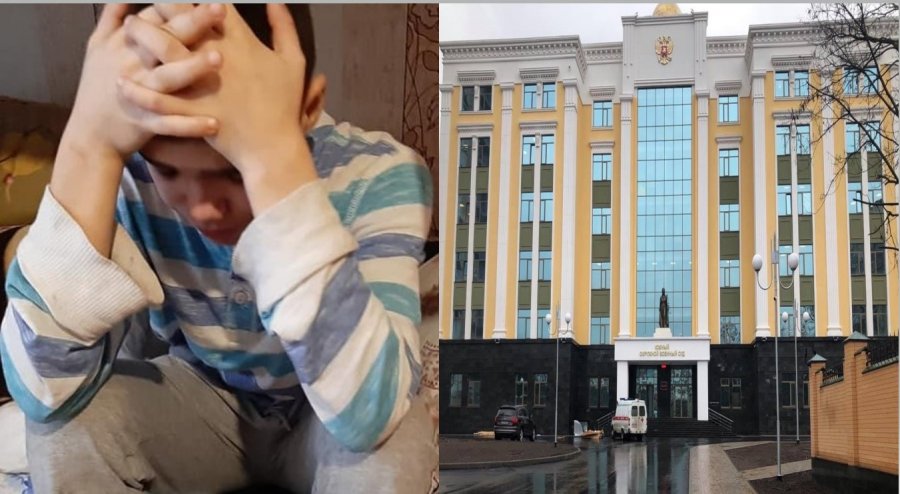 One of the children whose fathers were taken away from them on 11 March 2020, the huge new military court building in Rostov

The Russian court most notorious for its illegal trials of Ukrainian political prisoners has moved into a spectacular new building, which Moscow clearly sees no reason to  economize on.  The Southern District Military Court in Rostov-on-Don has also changed its name since Russia’s invasion and annexation of Crimea, but it is the same court that, since its 20-year sentence against Ukrainian filmmaker Oleg Sentsov in 2016, has been issuing sentence after sentence against Crimean Tatar and other Ukrainian political prisoners, including one, Pavlo Hryb, who was abducted from Belarus.

Roman Suprunov, the presiding ‘judge’ in the current religious persecution of four Crimean Tatars from Alushta, is clearly over the moon about his new work environment.  At one of the last hearings in this case he reportedly waxed lyrical about “the chandeliers like in a theatre” and the huge number of courtrooms.  It is not guaranteed, however, that the new location will put an end to the cruel practice of restricting the number of people able to attend the hearings.  For many parents, wives and children, this is the only possibility of seeing men already imprisoned for years.

This vast military court edifice is used for all ‘trials’ of Crimean Tatars and other Ukrainians under Russia’s ‘terrorism legislation’.  Virtually all such trials are in breach of the Fourth Geneva Convention which prohibits Russia, as occupying state, from applying its legislation on occupied territory.  They are also in grave violation of fundamental principles of law and the European Convention on Human Rights.  While it was only the trial of Oleg Sentsov and civic activist Oleksandr Kolchenko that received huge international media coverage, all of the trials and sentences thus far have been equally flawed.

From those first trials, Russia has used ‘terrorism’ charges against a huge number of Ukrainian citizens from occupied Crimea.  News of all armed searches and arrest help Moscow and Kremlin-controlled media push the idea that ‘Ukraine’ and ‘Ukrainians’ are a threat, one from which the Russian FSB are ‘protecting’ Crimeans.  There are other, even more sordid, reasons.  Russia has brought huge numbers of FSB and other enforcement officers to occupied Crimea, and each of these, as well as those Ukrainian turncoats now working for Russia, needs to prove that they are doing something.

‘Hizb ut-Tahrir’ cases are especially popular since these are, as Memorial Human Rights Centre specialist Vitaly Ponomaryov has put it, “a conveyor belt of political repression where you can be sentenced on the basis of spurious cases which have little in common with reality”.   Crimean Tatars and other Ukrainian Muslims are accused of involvement in Hizb ut-Tahrir, a peaceful Muslim organization which is legal in Ukraine.  The ‘terrorism’ charges lie solely in the fact that Russia’s Supreme Court declared Hizb ut-Tahrir ‘terrorist’ in 2003 in a secret ruling, which Ponomaryov believes was politically motivated.  Russia is now using such prosecutions in occupied Crimea as a weapon against civic activists and journalists.  Probably for that reason, as well as because of the ‘good statistics’ on supposedly ‘fighting terrorism’, FSB officers are believed to get bonuses and / or promotion for their zeal in imprisoning men who have committed no crime.

The first ‘Hizb ut-Tahrir’ trial did not go quite as the FSB had planned. Not, at least, at its first attempt on 7 September 2016 when three judges from what is now called the Southern District Court Military Court handed down significantly lower sentences than those demanded, even changing the charges against the young Crimean Tatar father of three, Ruslan Zeytullaev.  The FSB would not tolerate even such a modest demonstration of independence and forced two new sentences, with eight years finally added to Zeytullaev’s original 7-year sentence.

Since then, the judges have largely provided the sentences demanded, particularly against those, like Zeytullaev, accused of ‘organizing a Hizb ut-Tahrir group’.  The charges have remained identical, as has the lack of any real evidence, yet now those arbitrarily assigned the role of ‘organizer’ are now being sentenced to  17 to 20 years.

That this is a conveyor belt can be seen in the timetable for the next months.  There are, or shortly will be, 11 parallel trials at the court, involving 37 Crimean Tatars, the vast majority of whom are civic journalists and activists.  Not one of the men is accused of a recognizable crime, yet all are facing sentences of between 15 and 20 years.

It is likely that the FSB have split up the case of 25 civic journalists and activists, most of whom were arrested in the internationally condemned ‘operation’ on 27 March 2019, into five cloned trials in order to deflect attention from each of these trials. It is quite simply difficult to attend or even simply consult with lawyers and report on so many hearings.  Four men are separately on trial, with each of the men facing possible 20 year sentences which the FSB clearly hope to get without publicity.  Why not, when they can claim to have ‘caught a terrorist’ without really having to leave their offices.  The cases are essentially copy-pasted, with many of the ‘secret witnesses’ used for multiple trials, as well as the same pseudo-experts who claim to find ‘proof’ of involvement in Hizb ut-Tahrir in the use of a word, or in the nature of conversations about bringing up children or political repression.

Lists of names can be overwhelming, but all of the political prisoners have families whose lives have been shattered and without protest, without publicity, there is no chance of release.  There will be no end to such arrests until Russia is forced to end its criminal occupation of Crimea and its persecution of Ukrainians.

Please choose at least one of the cases and write to a political prisoner.  If possible also try to inform the media, human rights organizations and politicians in your country about the case and seek coverage / reaction.

The trials (there are addresses for writing letters at the bottom of the texts in the hyperlinks; the addresses of the four men facing individual trials will be given when they are brought to Rostov)

25 civic journalists and activists, most from Crimean Solidarity separated into FIVE trials

First Russia came for the journalists. and now it's hiding their trials

About the arrest of the last four men, see:  Blind man among those arrested for Russia’s conveyor belt of terror in occupied Crimea