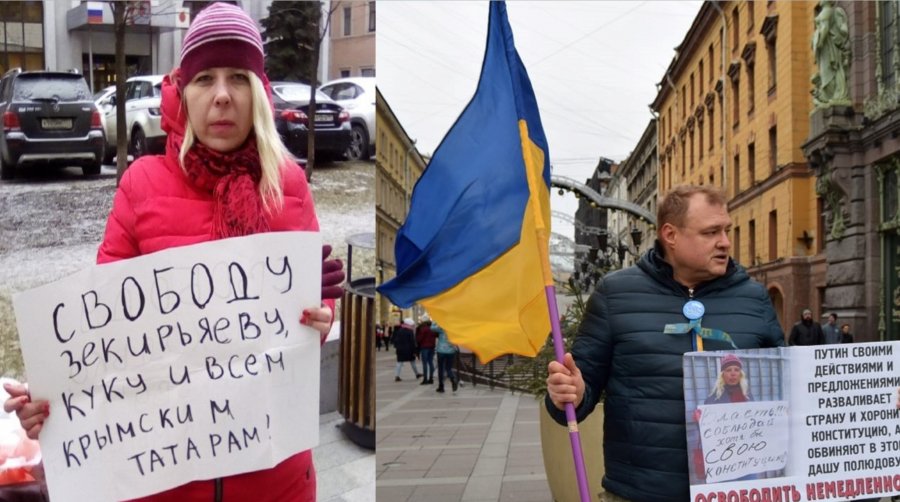 Darya Polyudova has been in detention since 15 January 2020, and there are strong grounds for believing that the Russian left-wing activist’s persecution is linked to her unwavering support for Ukraine, opposition to Russian aggression and her defence of the Kremlin’s Crimean Tatar and other Ukrainian political prisoners.  The ‘terrorism’ charges which could get the 31-year-old imprisoned for many years are based on what, in any democratic country, is protected by the right to express ones views on social media or in peaceful protest.

Polyudova’s lawyer, Leonid Solovyov reports that the indictment against his client has been signed by the Moscow public prosecutor with the case now sent to the Second Western District Military Court in Moscow.  Polyudova is facing charges under Article 205.2 § 1 of Russia’s criminal code – the so-called ‘public justification of terrorism’ (carrying a sentence of up to five years’ imprisonment) and 205.2 § 2 – ‘public justification of terrorism with the use of the Internet’ (up to seven years).

There is bitter irony in what the Russian FSB choose to consider ‘terrorism’ when on Russian, and not Ukrainian, territory.  In January 2019, Polyudova held a single-person picket in Moscow under a banner reading: “Kuril Islanders: Stop feeding Moscow! Long live the Far Eastern Republic!”.  She suggested that the island inhabitants hold a referendum on withdrawing from the Russian Federation. After Russian soldiers without insignia seized control of Crimea, it was a so-called ‘referendum’ that Moscow used to try to justify its annexation of Ukrainian territory.  On her VKontakte page, Polyudova wrote that it would be good for Russia if it split up into several countries.

The prosecution is claiming that, merely by reposting this, Polyudov was justifying terrorism and saying that it should be emulated.

In declaring Polyudova a political prisoner, the authoritative Memorial Human Rights Centre pointed out that she had not urged the people of the Kuril Islands to take up arms, and had merely called for a referendum, a call which is in no way criminal.

It is far-fetched, Memorial writes, to accuse somebody of justifying terrorism merely because they reposted somebody else’s text.

Memorial also notes the evident absurdity of Polyudova’s detention and coming trial over social media posts that had around 60 viewings, with this number including the FSB and Memorial.   Darya Polyudova’s prosecution, the human rights group concludes, is politically motivated, and linked with her social and political activism.

Polyudova publicly opposed Russia’s undeclared war against Ukraine and played an active role, from the arrests of Ukrainian filmmaker Oleg Sentsov and civic activist Oleksandr Kolchenko , in demanding their release and, later, an end to the mounting persecution of Crimean Tatars and other Ukrainian political prisoners.

This was officially on the basis of two VKontakte posts and a single-person picket, however Polyudova’s troubles really began in August 2014, when she and a few other friends tried to hold a march in favour of greater, although still extremely limited, federalization for Kuban.

Polyudova was arrested on 15 August 2014, two days before the banned march was supposed to have taken place.  She had been approached by an obvious provocateur, then jailed for 14 days for what the court decided to consider ‘petty hooliganism’.  She was never released even though criminal proceedings were only initiated on 15 September 2014 for alleged public calls to actions aimed at violating Russia’s territorial integrity (Article 280.1 of the Criminal Code).  Then too she was almost immediately recognized by Memorial HRC as a political prisoner.

The conviction then was on two charges. The first was over alleged ‘calls to separatism or extremism’, over a banner she held up during a single-person picket on April 4, 2014.  This read “No war against Ukraine, but revolution in Russia! No war, but revolution”!  She had circulated a photo of herself with the banner on VKontakte.  .

Polyudova was released in October 2017.  Before her arrest and detention in January 2019, she faced several administrative prosecutions, as, essentially, do all Russians who try to exercise the rights theoretically enshrined in Russia’s Constitution.  She refused to let the threat of real prosecution deter her and continued to come out on single-person pickets in support of Ukrainian political prisoners.