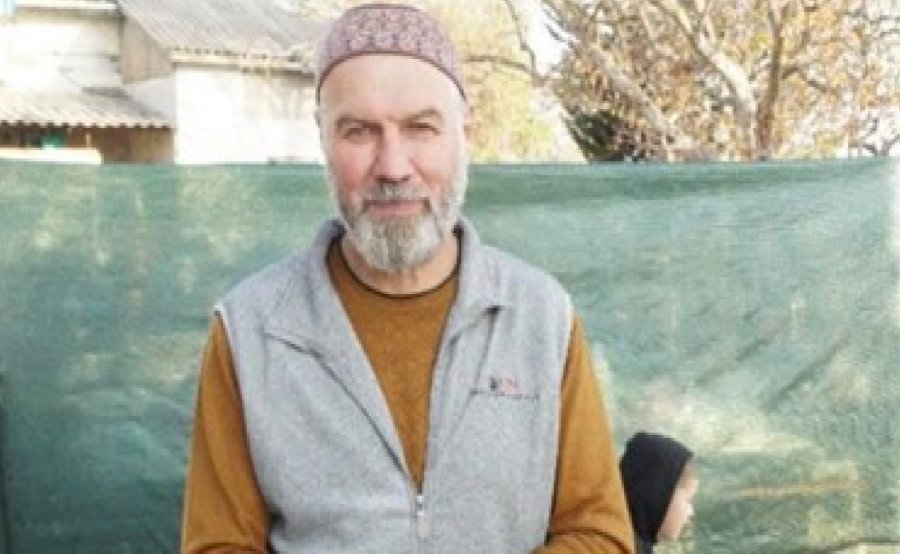 Yusuf Ashirov is facing administrative proceedings and a potentially high fine for what the Russian occupation authorities call ‘illegal missionary activity’, otherwise known as leading Friday prayers in his own mosque.  This is one of two prosecutions after an effective raid on the mosque in Alushta on 30 March and part of an aggressive offensive against a Muslim community clearly viewed as ‘too independent’.

According to Ashirov’s lawyer, Rustem Kyamilev, ‘prosecutor’ Sergei Brodsky issued a summons on 26 April.  The first of the two protocols of administrative proceedings counts as a repeat prosecution since Ashirov, who is the Imam of the Yugary Dzhami Mosque, has already been ‘convicted’ of carrying out his duties as Imam and leading the Friday prayers.   The official charge, under Article 5,26 § 4 of Russia’s code of administrative offences, punishes for something called “carrying out illegal missionary activities in infringement of legislation”.  It will come before the same Russian-controlled magistrate’s court ‘judge’ Svetlana Vlasova, who has already imposed a fine of five thousand roubles against Ashirov on the same charge and is likely, therefore, to impose a steeper fine.

This truly surreal document states that “in the course of a check at the site on 30 March 2021, it was established that ‘Alushta’ Imam, Yusuf Ashirov, between 20.03.2020 and 26.03.2021, carried out missionary activities every Friday and on Muslim religious festivals aimed at circulating information about the beliefs espoused by the given religious organization in the Yuhary Dzhami Mosque.” It goes on to claim that the mosque is the “state property” of Crimea which is under permanent lease to the Spiritual Directorate of Muslims of Crimea [or Muftiate].

The second charge is against the entire ‘Alushta’ religious community because of ‘unlabelled literature with full official name’ in the Yuhary Dzhami Mosque “in the absence of written consent from the managerial body of the said religious association”.  This is presumably claiming that such ‘written consent’ was required from the Mutfiate.

The ‘Alushta’ religious community has long been in conflict with the Muftiate because of its independence.  The Mufti, Emirali Ablayev, wants all religious communities to be fully subordinate to the Muftiate and, at least in this case, also has a material interest.  After initially sharing the opposition to Russian occupation expressed by the Mejlis, or representative assembly, of the Crimean Tatar people, Ablayev chose to collaborate with the occupation regime and has, in return, received ‘official status’ and, probably, other perks in occupied Crimea.

One such ‘perk’ is likely to be the other reason that the ‘Alushta’ community and members of it have come under attack.  The 19th Century Yuhary Dzhami Mosquem in the very centre of Alushta, has legally been in the hands of the ‘Alushta’ community since 1994.  In 2017, the occupation regime revoked the community’s ownership with Russian-controlled or Russian courts, right up to the Supreme Court upholding this illegal ruling.

There are grounds for believing that Ablayev and his people have collaborated with the occupation regime in persecuting Crimean Tatar and other Ukrainian Muslims on fabricated ‘terrorism’ charges.  It is almost certainly no accident that three political prisoners are either serving or facing monstrous sentences without any crime.

Representatives of the Muftiate took part, together with the Russian FSB, so-called centre for countering extremism, and prosecutor’s office, in the above-mentioned raid on the Yukhary-Dzhami Mosque.  They moved together around the premises, taking videos and removing three books, none of which was on Russia’s huge list of so-called ‘prohibited literature’.

Kyamilev is convinced that all of these criminal or administrative prosecutions against ‘Alushta’ or its members are part of the general systematic pressure brought to bear by the Muftiate against autonomous religious communities.  Russia is here acting in its own interests and in those of the religious body which it controls.  “These are deliberate actions aimed at the total dissolution of a community which irritates the authorities and the Muftiate with its independent position and which, in addition, enjoys huge authority among believers in the city.”

The most shocking part of the offensive against ‘Alushta’ is the use of ‘terrorist’ charges which have so far been brought against three members of the community, including its head, Lenur Khalilov.  He was arrested on 10 June 2019, together with an active member of the community, Ruslan Mesutov.  Their ‘trial’, together with Ruslan Nagayev and Eldar Kantimirov is now coming to an end in Russia, with both Khalilov and Mesutov facing sentences of up to 20 years.  They are recognized political prisoners, as is Muslim Aliev, who is also an Amnesty International prisoner of conscience.  He is serving a horrific 19-year sentence.