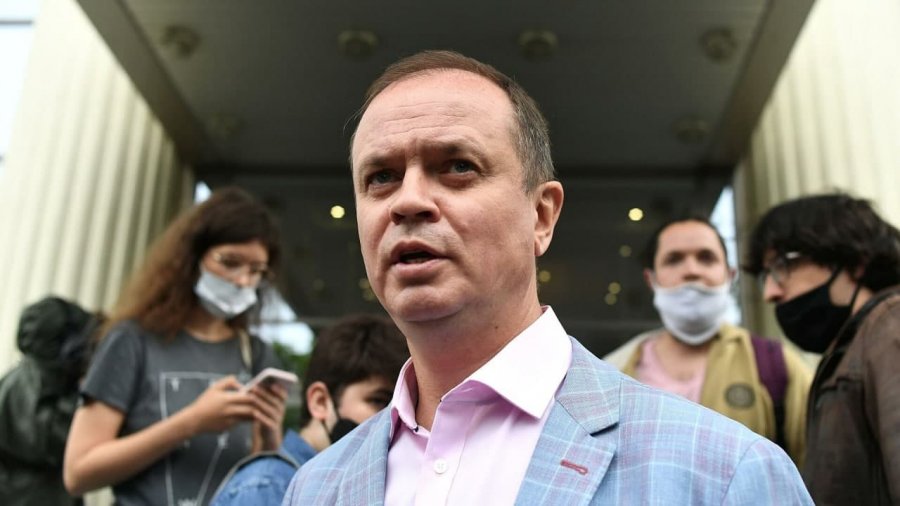 The Russian FSB burst into Ivan Pavlov’s hotel room in Moscow early on 30 April, carried out a search and detained the well-known lawyer and head of the legal and journalist initiative Team 29.  It is no accident that lawyer colleagues began circulating information under the hashtag #ЗаАдвокатамиПришли [they’ve come for the lawyers] since the criminal charges that Pavlov is now facing are directly and solely linked with his work as a lawyer.

Although best known abroad as the lawyer representing Alexei Navalny’s Anti-Corruption Foundation (FBK) which the Russian authorities are currently working to ban, the charges are over his defence of imprisoned journalist Ivan Safronov.  Pavlov was in fact in Moscow to attend a court hearing in Safronov’s case, but ended up detained himself.  Searches were also carried out of Pavlov’s home in St Petersburg, at the Team 29 offices and of the home of their IT specialist.  According to Pavlov’s colleague, Yevgeny Smirnov, at least 50 enforcement officers were deployed in this ‘operation’, with that “the most modest estimate”.  The FSB removed Pavlov’s file on Safronov which is, of course, a grave breach of the latter’s right to confidentiality.

After a long fraught day, Pavlov was released, however with a ‘preventive measure’ imposed, namely that he is prohibited from speaking with any participants in the criminal case or from using any means of communication, including the Internet.

Pavlov has, in short, been stripped of any possibility of carrying out his professional work, and other Russian lawyers, as well as those in occupied Crimea, have received a chilling warning of what they can expect for carrying out their work.

Pavlov has been charged with divulging information from the pre-trial investigation, under Article 310 of Russia’s criminal code.  The sentence ranges from a fine through to a six-month term of imprisonment.

As Smirnov notes, “this case is directly linked with the professional activities both of Ivan Pavlov and of Team 29, specifically with criminal prosecutions over state treason and spying”.

He goes on to say that the measures were clearly authorized at the highest level, with the signatures of Alexander Bortnikov, Director of the FSB, and Nikolai Yuriev, Head of the FSB’s Department of Military Counter-espionage on the main documents in the case.

“We view the events solely as revenge for our defence and coverage of our criminal prosecutions. We lawyers have on numerous occasions been threatened with criminal charges, including from the investigator in the Safronov case, Alexander Chaban. The same threats (to imprison their lawyers) have been issued to our clients and their relatives.”

Smirnov himself has been told that the FSB will try to interrogate him, and the events on Friday are by no means an end to the so-called ‘investigative measures’.

“We need your support, the time has come to uphold the right to defence”.

Ivan Safronov is a journalist who wrote for Kommersant and Vedomosti on military issues. At the time of his arrest, in July 2020, he had been working for a couple of months as advisor to the head of the Russian space agency, Roskosmos.  This was the first arrest on ‘state treason’ charges against a journalist in almost 20 years, but is one of very many ‘treason’ / ‘espionage’ cases since Vladimir Putin came to power.  All such cases are carried out with maximum secrecy with imprisoned defendants generally put under enormous pressure to reject independent lawyers.  This was the case in 2015, following the arrest in Moscow of Ukrainian pensioner Yury Soloshenko.  Ivan Pavlov had taken up his defence but was effectively prevented from seeing him until so much pressure was brought to bear on Soloshenko that he agreed to a state-appointed ‘lawyer’.

As well as holding all such court hearings behind closed doors and trying to get detainees to reject the services of independent lawyers, the FSB also generally forces lawyers to sign agreements not to divulge any information about the case. The FSB are now claiming that Pavlov divulged ‘investigative secrets’ by publicly stating that Safronov is being unlawful detained at the Lefortovo prison in Moscow on absurd charges, and that there is a so-called ‘secret witness’ in the case.

The FSB have already persecuted lawyers in Russia and in occupied Crimea, with Crimean Tatar lawyer Emil Kurbedinov having twice been detained and even imprisoned for 10-15 days on quite surreal charges.  Kurbedinov, Pavlov and many of their colleagues insist on properly representing the victims of political persecution and are clearly viewed with enormous hostility by the FSB.  This case is the most ominous to date, with the criminal charges linked with Pavlov’s insistence on carrying out his professional duties and obviously aimed at silencing him.

Ukrainian tortured in Donetsk concentration camp, then sentenced to 10 years in Russia