Russia fraternizes with the Taliban, but accuses peaceful Crimean Tatars of ‘terrorism’ 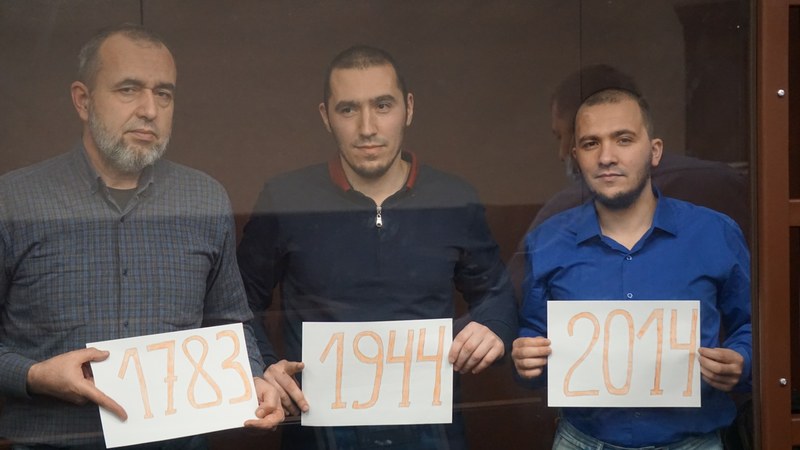 Seitumer Seitumerov has reminded a Ukrainian traitor and Russian court that in 2014 Russian soldiers without insignia committed all of the crimes that Russia is now  accusing him, his brother and many other Crimean Tatar political prisoners of without any justification.

Seitumer and Osman Seitumerov, the sons of a well-known historian; their uncle Rustem Seitmemetov and civic journalist Amet Suleimanov are on ‘trial’ in Rostov, accused of ‘involvement’ in a peaceful organization which only Russia calls ‘terrorist’, and which is legal in Ukraine.  They are also accused of ‘planning a violent uprising’ although even the FSB admit that not one of them is suspected of actions or direct plans to commit any action aimed at ‘overthrowing the Russian constitutional order’.  All four men are recognized political prisoners, whose release has been demanded by international bodies and democratic states.

Despite the lack of any ‘terrorism’ and the surreal nature of the ‘evidence’ presented, the men face sentences of 10-20 years’ in the worst of Russia’s prison colonies.  All remain unbroken and are certainly not afraid to spell out exactly what is wrong with this and all such gravely flawed ‘trials.

This Seitumer Seitumerov demonstrated very powerfully on 27 April.  Seitumer, who, like his father, is a historian, began by commenting on the testimony given by Nikolai Artykbayev, a Ukrainian turncoat who, in 2014, betrayed his oath to serve Ukraine as an officer of the SBU [Ukrainian Security Service] and joined Russia’s FSB.

“Officer Artykbayev was until 2014 an SBU officer, yet despite his direct civic duty to protect Ukraine’s constitutional order, he took part in overthrowing [that order] in Crimea. Soldiers without insignia and in green uniform carried out those same crimes of which we now stand accused. The robbery resulted in losses among the civilian population; abductions; torture and killings, not to mention the unlawful searches and arrests.

After March 2014, Artykbayev began work for the FSB and is now giving muddled testimony against us, Crimean Tatars.”

Seitumerov goes on to point out that Artykbayev is unable to go to mainland Ukraine in order to arrest the fifth person in this ‘case’, a journalist also called Seitumer Seitumerov, since the turncoat could be arrested there.  “I consider this information important since it gives a clear understanding of who it is that is today bringing criminal charges against us.

[Artykbayev] on several occasions indicated that the reason that we are now on trial was our active position on criminal cases against Crimean Tatars. We attended court hearings, were present at searches, helped the families of victims of the FSB’s lawlessness in Crimea.  Such activities do not violate Russia’s Constitution and laws.”

Seitumerov listed some of the grave flaws in the testimony given by Artykbayev.  The latter often claimed that information was a ‘state secret’ and could not be divulged “in the interests of the investigation”.  Seitumerov bluntly calls this avoiding providing an answer.

“With respect to violent seizure of power and recruitment by us, Artykbayev was forced to admit that we had not carried out any actions aimed at the overthrow of power in Crimea or in Russia.  Nor could he name any people that we had recruited.”

There are many Islamic books in Crimean Tatar homes, he adds, with these having no tolerance for violence or terrorism, things that Islam rejects.  This is one of the reasons why the persecution of their fellow citizens arouse bemusement and people understand that they are fabricated.

Seitumerov went on to note that in March this year, Russia’s foreign minister Sergei Lavrov and other high-ranking officials had received “representatives of the terrorist movement the Taliban.”  That organization was recognized as terrorist by the same Supreme Court ruling from 2003 that declared Hizb ut-Tahrir  ‘terrorist’.  The FSB and Russian authorities, however, are highly selective. Applying their laws to arrest dissidents, while ignoring them against those they support.  Seitumerov mentions only the Taliban, however Russia has been courting the Palestinian Hamas since 2006.  Unlike the Taliban and Hamas, Hizb ut-Tahrir  followers are not known to have committed any acts of terrorism anywhere in the world.

Seitumerov mentions only some of the preposterous ‘evidence’ used to try to link the men with Hizb ut-Tahrir , including the claim, from FSB-loyal ‘experts’, as well as people like Artykbayev, that the word ‘sukhbet’ is a specialized term used by Hizb ut-Tahrir  members.  It is, in fact, a common word, including in Crimean Tatar, for any meeting.

This, and the fact that Artykbayev, who does not know Crimean Tatar or Arabic, and is ignorant on religious subjects, should have carried out the transcript of the illicitly taped conversation in a mosque, would be shoddy and unacceptable in any prosecution.  Here the men are literally facing ‘terrorism’ charges purely on the basis of a Supreme Court ruling from 2003, with wrong interpretations and translations used to ‘prove’ involvement in Hizb ut-Tahrir and thus lead to sentences of up to 20 years.

“And one last thing. Artykbayev constantly accuses us of taking part in a terrorist organization and wanting to carry out a coup d’état in Russia.  That makes me recall events from 1938 when our great-grandfather, Mustafa Murtaza oglu, who had a higher theological education and was a teacher at that time, a mulla and imam, was arrested on the same fabricated charges. That was on 6 February 1938.  A week later, he was declared guilty and sentenced to death by firing squad. After 52 years, in 1990, he was rehabilitated at the decision of the prosecutor’s office and declared a victim of repression. The charges now are a mirror repetition of the injustice of those years. We clearly understand that today, against us, our families and our people, they are using the same terror and repression that was applied by the Soviet regime.  Over so many years, nothing at all has changed.”

It was on 11 March 2020 that the Seitumerov family were targeted in the third wave of arrests of Crimean Tatars, most of them civic journalists or activists, from Bakhchysarai.  Seven homes were subjected to early-morning raids, with 32-year-old Seitumer and his 28-year-old brother Osman Seitumerov arrested, together with their uncle, Rustem Seytmemetov (47) and 36-year-old Amet Suleimanov.  Both of the brothers had attended political trials, sent food parcels to political prisoners and helped their families.  Suleimanov is a Crimean Solidarity activist and journalist, who streamed information about arrests and political trials onto the Internet.  Armed searches were also carried out of the homes of another Crimean Solidarity civic journalist Seidamet Mustafayev, with his elder father initially detained, and of the second Seitumer Seitumerov, a former Crimean Solidarity activist who left for mainland Ukraine a while ago and is now a presenter on TV ATR.

The Seitumerov brothers, Seytmemetov and Suleimanov are all charged with ‘involvement’ in a Hizb ut-Tahrir group, under Article 205.5 § 2  of Russia’s criminal code which carries a sentence of from 10 to 20 years’ imprisonment.  Fortunately, this case is slightly different from the FSB template prosecutions in that the only person charged with the more serious Article 205.5 § 1 (‘organizing a Hizb ut-Tahrir group’) is ATR journalist, Seitumerov, who is safely in mainland Ukraine.

The other deviation from the ‘norm’ in these cases is that one of the four men – Amet Suleimanov – was placed under house arrest, rather than in detention. This recognition that detention, given Suleimanov’s chronic rheumatic heart disease, aortic insufficiency, coronary artery disease and other conditions, would lead to his death within days, has not prompted the FSB to withdraw the absurd ‘terrorism’ charges, and even house arrest is placing Suleimanov’s life in real danger since he urgently needs an operation to replace a faulty heart valve.   Osman and Seitumer Seitumerov and their uncle, Rustem Seitmemetov, have been imprisoned since 11 March 2020, and are now held in a Russian SIZO [remand prison] in Rostov.

Their trial is underway at the same Southern District Military Court which has been used for most of Russia’s politically-motivated trials of Ukrainians over the past seven years.

The charges are essentially based on two recordings of conversations in a Mosque. One is on a religious theme, regarding Judgement Day and people’s responsibility for their actions. The second touches on history, and specifically, the act of genocide against the Crimean Tatar people in 1944, i.e. the Deportation., and how nobody has been held to account. Such conversations were then passed to FSB-loyal ‘linguistic experts’ who, in this case, added words that were not actually said, and gave the  men’s utterances a negative interpretation that suited the prosecution, but was not based on what they had heard.  There is also ‘testimony’ of secret witnesses who have already taken part in other political trials and whose illegal position in Crimea makes it easy for the FSB to put pressure on them.