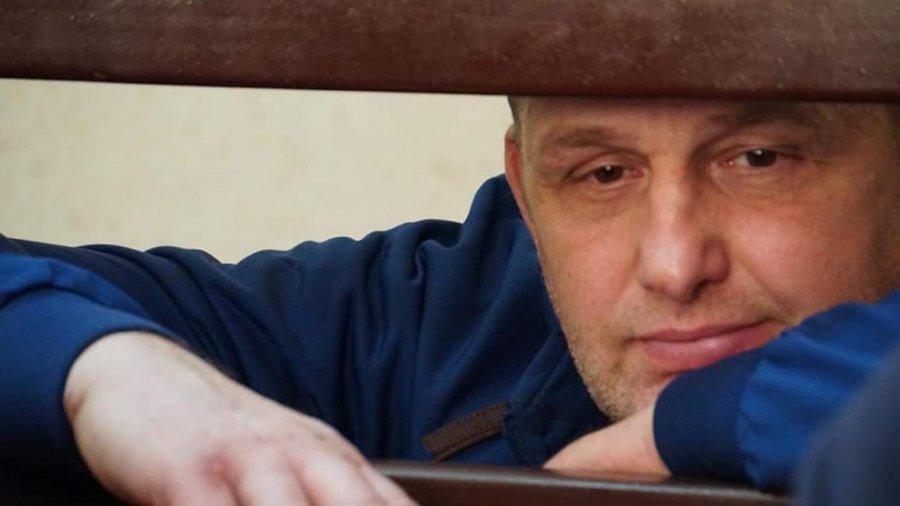 The FSB have been forced to admit that the explosive device which they claim was found in Vladislav Yesypenko’s car does not have his fingerprints on it.  According to the FSB ‘investigator’, Vitaly Vlasov, a test for biological traces on the grenade has yet to be completed.  In the cases of several Ukrainian political prisoners,  DNA samples, illegally taken from them without the proper procedure and in the absence of a lawyer, have later been ‘found’ on explosives or bullets and used as ‘evidence’.

Yesypenko, who is a freelance journalist for Krym.Realii, the Crimean Service of Radio Free Europe / Radio Liberty (RFE/RL), was prevented from seeing independent lawyers until almost a month after his arrest.  As soon as he was able to see his lawyer, Alexei Ladin, he formally rejected the lawyer whom the FSB had foisted upon him and retracted his videoed ‘confession’, which he says was extracted through torture.

The charges pertain to the purported discovery in Yesypenko’s car on 10 March of a homemade explosive device. The investigators claim that he took this, unassembled, from a secret hiding place in the village Pobeda on 26 February.  He is then supposed to have taken everything to Simferopol where he assembled the grenade.  The FSB claim that they detained the journalist “so as to prevent him carrying out acts of sabotage in the interests of the Ukrainian security service.”

There is, in fact, every reason to believe that Yesypenko’s arrest and the charges against him are politically motivated.  The FSB systematically blocked lawyers Ladin and Emil Kurbedinov from seeing the journalist and falsely claimed that it was Yesypenko who had said he did not want them to represent him. They instead foisted Violetta Sineglazova, a ‘lawyer’ who has already demonstrated in other cases that she essentially works for the prosecution.

The other immediate reasons for concern lie in the timing of Yesypenko’s arrest and the propaganda purposes for which it was used.  As reported, he disappeared on 10 March, the day after he and Yelizaveta Pavlenko from Alushta laid flowers at the monument to the great Ukrainian poet Taras Shevchenko on the 2007th anniversary of his birthday.  It was later learned that they had been seized by masked FSB officers who carried out a search of Pavlenko’s home and took away technology and other items.

It was only during a court hearing on 6 April that the FSB were no longer able to prevent Yesypenko from communicating with a real lawyer.  During that hearing, Yesypenko formally rejected Sineglazova’s ‘services’.  He also provided a written account of what had happened from when he was detained on  the road from Simferopol to Alushta.  He asserts that the FSB planted a grenade in his car and then put a bag over his head and took him away to a basement, without windows, where  the men, all wearing balaclavas, stripped him naked and then subjected him to beatings and torture, with electric currents attached to his earlobes.  The pain was unendurable, and he was prepared, he says, to sign whatever they put in front of him just so that they would stop.  He was tortured until he gave the ‘confession’ required, and then taken to Armyansk where the FSB videoed him pointing to what was claimed to be the hiding place from which he had supposedly taken the grenade.

Yesypenko told ‘the court’ that the torture had continued for two days in some basement with his tormenters gradually increasing the voltage of the electric current used so that he did not get used to the pain.  They also beat him, including his genitals.  After the hearing a month ago, Ladin also recounted that the FSB had threatened to kill Yesypenko if he didn’t ‘cooperate’, telling him that it would be reported that he had hanged himself while alone in his cell.

All of this was, Ladin stresses, aimed at extracting a so-called ‘confession’ for the televised ‘interview’ on 18 March in which Yesypenko was supposedly answering questions from Oleg Kriuchkov, general director of the Russian-controlled propaganda channel Crimea24.  Yesypenko has said that he was given a written text that he needed to follow.

The initial announcement from the FSB on 16 March claimed to have “broken up spying and sabotage activities for the Ukrainian Security Service by Russian citizen Vladislav Yesypenko.”.   Despite the mention of Ukraine’s Security Service, or SBU, the FSB was essentially describing a journalist’s work, with Yesypenko having “taken photos and video footage of infrastructure and places where there are a lot of people in the republic of Crimea”.

The main target of the Crimea24 propaganda on 18 March seemed, in fact, to be Krym.Realii.  RFE/RL is referred to as “an American media holding” which is claimed to be “financed and totally controlled by the USA”.   It is, in fact, financed by US federal grants as a private grantee.  Unlike the Kremlin-funded Russia Today, or RT, which really is a propaganda vehicle for the state regime, Krym.Realii, and RFE/RL President James Fly has condemned Yesypenko’s arrest and demanded his release.

Yesypenko left Crimea with his wife, Yekateryna and their baby daughter, Stefania, at the beginning of 2015.  Yekateryna explains that her husband went to Crimea on 23 February, on commissioning from Krym.Realii.  He wrote about life in occupied Crimea and, of necessity, about the problem with water supplies which Russia is unable to resolve.  As with reports on repression that have led to around 10 Crimean Tatar civic journalists being arrested, Yesypenko’s account of the water shortage may have annoyed the occupation regime, but fell entirely within his job description as a journalist.

On 30 April, the Russian-controlled Kievsky District Court in Simferopol extended Yesypenko’s detention until the middle of July.