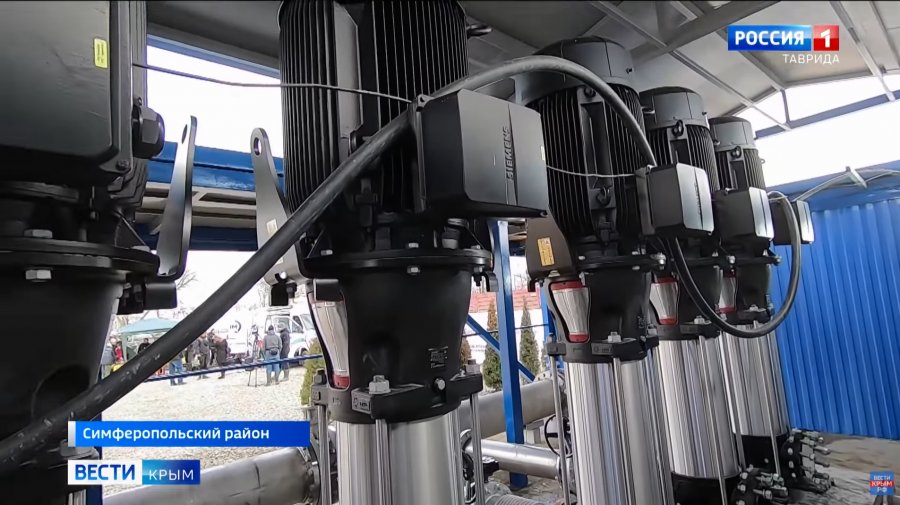 The Danish company Grundfos appears to have both collaborated with Germany’s Siemens in producing water pumps for Russian-occupied Crimea and learned from the German company how to issue wide-eyed denials of any breach of EU sanctions.  Since Siemens has already used the same method to enable Russia to get gas turbines for Crimea, the EU is proving frustratingly indifferent to methods of bypassing critically important sanctions.

Since Grundfos calls itself a “value-directed” company, it is worth pointing out just what is at stake here.  Seven years after Russia’s invasion and annexation, occupied Crimea ranks not much higher than North Korea in Freedom House’s latest report, with well over 100 Crimean Tatar and other Ukrainian political prisoners.  Russia is unable to provide Crimea with enough water for agricultural and industrial needs.  Its illegal militarization of the occupied peninsula, failure to maintain water infrastructure, as well as a particularly dry year in 2020, have led to restrictions even on domestic water supplies.   Until April 2014, well over 80% of Crimea’s water requirements came from the Dnipro River in mainland Ukraine via the Northern Crimean Canal. Crimea’s organic dependence on Ukraine for water does not fit the narrative Russia has used to try to justify its annexation, and it is no coincidence that the water pumps were first shown on Russian and Russian-controlled propaganda channels on 18 March, the anniversary of the date when Russia finalized its Crimean land-grab. The Grundfos / Siemens pumps or any other equipment that help Russia provide water or energy give Moscow propaganda opportunities and delay de-occupation and an end to the repression Russia has brought to Crimea.

It was the Russian Scanner Project who first reported, on 7 April that the pumps triumphantly demonstrated on television were, in fact, Danish, produced by Grundfos, with this apparent violation of sanctions reported by Ukrainian websites (Euromaidan Press and the Association of Reintegration of Crimea).  The German public broadcaster Deutsche Welle has followed the story since then.  On 6 May, it reported that it had studied the Internet images available and concluded that “seven Grundfos CR 185-8 A-F-A-V-HQQV pumps were installed in the Beschterek-Suja waterworks. They are the newest and most powerful models currently available and not officially for sale on the Russian market. According to the technical specifications, the pumps are also equipped with Siemens motors.”

The Russian media claim that only Russian technology was used, Siemens that it has complied with EU sanctions, and Grundfos Vice President Peter Trillingsgaard that “they are not aware of deliveries to Crimea.”  Judging by Trillingsgaard’s comments, Grundfos’s position appears to be that they had no suspicions and therefore did not “request identification of the end-user”.

Siemens does extract ‘an end-user certificate’ which names the customer and “the final user of the equipment”.  As a Moscow-based lawyer, Thomas Heidemann, explained to DW: "The European supplier then files away this end-user certificate and can show it did everything possible to prevent a sanctions violation."

All of this is worryingly reminiscent of the manner by which Siemens gas turbines ended up in occupied Crimea despite EU sanctions and repeated warnings that this was exactly where the turbines were headed.  Reports in prominent Russian and international media even detailed the method that was being used, yet Siemens still continued to repeat, mantra-like, that it complied with EU sanctions and knew nothing of any violations, until the turbines were photographed already in occupied Crimea.  The claim of ignorance was especially pitiful given that Siemens’ Russian subsidiary was supposedly sending the four gas turbines instead to a non-existent power plant.  These turbines are now helping Moscow’s militarization of illegally occupied territory.

Grundfos also has a Russian subsidiary, Grundfos Istra, however the latter has not replied to DW’s request for information and Trillingsgaard is adamant that his company does not know how its pumps came to be in Crimea.

Judging by Heidemann’s explanation, the ‘how’ is not difficult to understand.  He asserts that a company’s Russian subsidiary cannot demand that customers even provide an end-user document stating that the product will not be used in Crimea.  He also makes the following statement: “When delivering machines, the European supplier must observe the European sanctions. If it does not, it is not permitted to ship the goods. It is usually possible to deliver to a Russian subsidiary,"

Why is it usually possible?  Because the understanding is that nobody asks inconvenient questions?

Boris Babin, former Presidential Representative on Crimea, is in no doubt that Grundfos and Siemens consciously violated EU sanctions. He explains that the equipment is no simple hose, but sophisticated equipment which require certification, insurance and service guarantees.  The hoses are extremely specialized, with enhanced power, and there much have been prior agreement, based on awareness of the specific conditions where they were to be used.

DW reports that the Danish authorities are examining whether Grundfos knew of the shipments and was in violation of EU sanctions.

Very good, however the German prosecutor was reported to have initiated an investigation back in July 2017 after the Siemens turbines were delivered to Crimea.  Over a year later, in November 2018, Reuters reported that the Hamburg Public Prosecutor was investigating three German Siemens employees based in St. Petersburg over the turbines.  It is unclear if anybody has actually answered for that brazen scheme to bypass sanctions.

The present case is less obvious, but the same general mechanism would seem to have been used.  If Heidermann is correct and Russian companies can legally refuse to divulge information about machines, etc., headed for Crimea, then the current sanctions system needs to be significantly tightened.