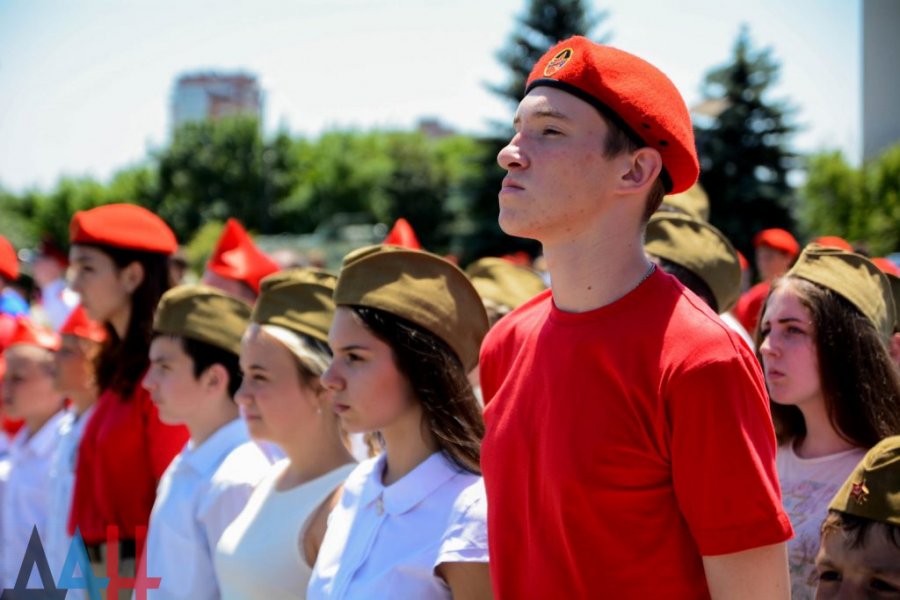 The self-proclaimed ‘Donetsk people’s republic’[‘DPR’]  reportedly spent almost 20 million UAH this months on measures marking Victory Day on 9 May and the so-called ‘Republic Day’ on 11 May.  Most, if not all, of the events over recent weeks will have been aimed at propaganda, with children and young people, in particular, taught to glorify the so-called ‘heroes of the republic’ and want to fight for an entity which even Russia, which controls it, has yet to ‘recognize’.

On 30 April, for example, children in two age groups were taken on a tour of Donetsk entitled ‘Heroes among us’, with their guides from the ‘Donetsk republic local history museum’s department on ‘the history of DPR’.  This began with the children and young people given a doubtless highly specific account of “the beginning of events in 2014” and ended with them taken to the so-called “Avenue of heroes”.   The statues so far include Alexander Zakharchenko and Mykhailo Tolstykh, who was more notorious as ‘Givi’.  Zakharchenko became ‘prime minister’ in August 2014, soon after the downing of Malaysian airliner MH17 with a Russian BUK missile made it tactically important for Moscow to remove the Russians holding top posts.  He was killed in a bomb blast in a restaurant on 31 August 2018.  Givi was killed earlier, also by a bomb blast, in February 2017.   The militants themselves and Russia invariably claim that Ukraine was behind such deaths.  In all such cases, the men have been extremely security conscious, and always surrounded by guards.

Ukraine had good reason to want to eliminate both Zakharchenko and Tolstykh, but even stronger grounds to catch them and both hold them to account for war crimes and obtain vital information.  The same applies to the notorious Russia mercenary, Arseny Pavlov (‘Motorola’) who was also killed in a bomb blast in the lift of his apartment block in October 2016.

The refrain has always been that Motorola was a hero killed by Ukraine, and he too now has his own monument in ‘DPR’   He and Givi are both also called ‘heroes of Donbas’ in a monument in Rostov (Russia).  The problem here, however, is that a quite different explanation for Motorola’s killing has been given by Igor Girkin [or Strelkov’].  Officially a former Russian military intelligence officer, Girkin first earned international sanctions for his role in Russia’s invasion of Crimea, then went on, in April 2014,  to unleash the war in Donbas.  He can certainly not be suspected of pro-Ukrainian sentiments.   Girkin is now on trial, in absentia, in the Netherlands over MH17, and appears to be either too useful, or too dangerous for the Kremlin to eliminate, despite constant inconvenient revelations.

In October 2020, Ukrainian journalist Denis Kazansky posted excerpts from the latest of Girkin’s innumerable interviews.  In it, Girkin clearly suggests that the order to kill Motorola came from Moscow, and specifically Vladislav Surkov, the aide to Russian President Vladimir Putin, who was at that time widely believed to be the Kremlin’s fixer, wield control over the militants in the so-called ‘Donetsk and Luhansk republics’.

Girkin can be seen and heard saying that he cannot say anything about Ukrainian saboteurs being involved in Motorola’s killing.  What he can say, however, with certainty is that “our people” were involved.  He notes that Surkov was at that time in charge of what he calls “the Ukrainian line”, and that the killing “100% did not happen without him.  He asserts that the guards were removed a day earlier, and that some supposed lift maintenance people had arrived soon afterwards.  It was there that the bomb went off. Girkin adds that the same applies to the  killings of others, including  ‘field commander’ Alexei Mozgovy in 2015.

Surkov was present, together with Zakharchenko, at the unveiling of the monument to these and other dead ‘heroes of Donbas’ in Rostov on the first anniversary of Motorola’s death.

Girkin likely has his grievances against Surkov, and he does not, in any case, provide any proof.  On the other hand, many militants, including some who were already living in Russia, have met with violent deaths, and Motorola was also known to have been extremely security conscious.

While it may not be clear who was behind any of these men’s deaths, not one of them warrants being honoured as a ‘hero.

Alexei Mozgovoy (Ukrainian Oleksiy Mozhovy) was involved in a ‘people’s court’ which essentially delivered ‘death sentences’ through a show of hands.  In May 2014, he and a fellow militant Alexander Kostin, organized the ambush and killing of a Ukrainian family who they knew was fleeing to Russia in two cars full of money and other goods.  Their subordinates were deceived into thinking that they were shooting at a convoy of Ukrainian ‘Right Sector’ fighters (details here).

Arseny Pavlov (Motorola) was a Russian mercenary, who is believed to have murdered Ihor Branovytsky, one of the ‘Cyborgs’ defending Donetsk Airport, after the latter and his men had already been taken prisoners.  Motorola himself told Kyiv Post that he had shot 15 Ukrainian prisoners of war.  The same eyewitnesses to Motorola’s murder report that Givi, together with two Chechens and a woman, took part in torturing Branovytsky and the other prisoners.

All of the above, Zakharchenko and others are also suspected of many other crimes.

Children in occupied Donbas are, however, being told that they were ‘heroes’, that the farcical ‘referendums’ on 11 May 2014 were the expression of the will of the Donbas people, and that the only villains in this fictitious narrative were the government in Kyiv and Ukrainian soldiers.  A large number are also undergoing particular indoctrination through involvement in DPR / LPR version of Russia’s ‘Yunarmia’ or ‘Youth Army’.

Human rights groups monitoring occupied Donbas, such as Vostok SOS and the Eastern Human Rights Group [EHRG], have long warned of the immense danger such indoctrination poses.   They report that Russia is spending millions of dollars on various projects aimed at inculcating ‘Russian World’ ideology and raising a generation of Ukrainians who essentially hate Ukraine.