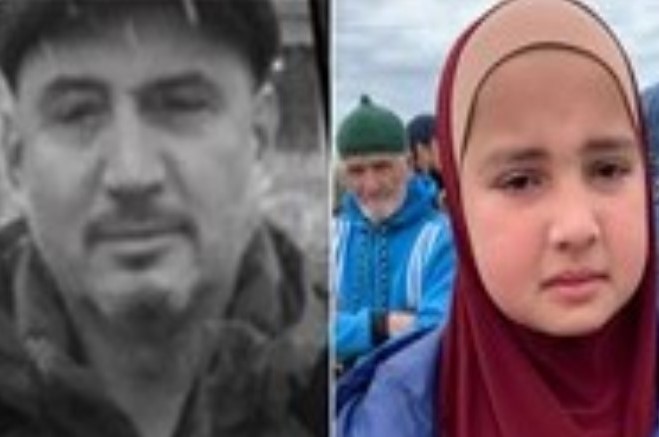 Whether this was revenge because the European Court of Human Rights found that Russia had violated Nabi Rakhimov’s rights, or a botched arrest is unclear, but the FSB went on to initiate cynical criminal charges against the slain man and to take his wife away

On Monday evening, Nabi Rakhimov broke his fast together with other Muslims  observing Ramadan in Russian-occupied Crimea.  Less than 24 hours later, he had been shot dead by the FSB and other Russian-controlled enforcement officers who burst into his home and then came for him at the house that he was helping to build.  His wife, Sokhiba Burkhanova was taken away after the early morning search, and as of late evening on 11 May was still being held by the FSB.

Rakhimov had had many bad experiences with the authorities in Russia for which he was, in July 2014, awarded significant damages by the European Court of Human Rights.  The FSB are now claiming that he “showed resistance when being detained” by the doubtless large contingent of armed enforcement officers who appeared on Tuesday morning at the house in Dubki, a village outside Simferopol.  This is clearly their excuse for shooting him dead, but impossible to take seriously.  It is unlikely that, even if he had wanted to, he would have resisted at all, given the number of officers confronting him. Neighbours recount that they saw a large number of enforcement officers arrive, and then heard shooting. Lawyer Islyam Velilyaev reports that the officers claim that Rakhimov had a weapon and began shooting.  He supposedly also had a grenade.  This, however, is now their word against a man shot dead and unable to speak for himself.  The FSB has long been notorious for planting anything from ‘prohibited literature’ to explosives in fabricating politically motivated prosecutions in occupied Crimea, and there is certainly nothing to suggest that Rakhimov was involved in anything illegal.  The search of the family’s home in Zavetnoye was also carried out without a lawyer being allowed in and all the violations that have become standard in occupied Crimea.  Enforcement officers also tried to intimidate and drive away a Crimean Solidarity journalist who was in no way impeding their ‘work’, but who was helping to ensure that it was not done in secret.

51-year-old Rakhimov was a devout Muslim, who was himself observing the Ramadan fast and also supporting his family by helping to prepare food for the communal iftar, or evening breaking of the fast.  He and his family had been living in the village of Zavetnoye in Crimea since 2015, with Rakhimov also working on construction sites and keeping poultry, etc. There are two elder daughters who are already married, however their 15-year-old son and youngest daughter (11) are still at school.  The other village residents speak of the slain man positively, saying he was a decent, hard-working man, looking after his family.

Russian propaganda media have a different version.  Izvestia gave a ‘report’ under the title “FSB eliminate an armed militant near Simferopol” with a photo that very clearly had nothing to do with the events on 11 May.  It quotes the FSB as stating that “the suspect was a member of a terrorist organization” and that he was “neutralized” in a gun battle.

If we consider the European Court of Human Rights [ECHR] judgement which became final on 15 December 2014, Rakhimov had clearly moved to Russia due to fears of religious persecution in Uzbekistan.  He was accused of involvement in Hizb ut-Tahrir , a peaceful transnational organization which is not known to have committed any acts of terrorism anywhere in the world.  Worth noting that Vitaly Ponomaryov, an expert from the renowned Memorial Human Rights Centre, believes that Russia’s Supreme Court declared Hizb ut-Tahrir  ‘terrorist’ in 2003 to enable the Russian authorities to forcibly deport asylum seekers fleeing religious persecution back to Uzbekistan.  Since 2013, when Rakhimov was detained in Russia, the FSB have been at least as repressive in their arrests and monstrous sentences against people accused, often on the basis of very flawed evidence, of ‘involvement’ in Hizb ut-Tahrir .  As mentioned, ECHR found Russia to have violated Rakhimov’s rights and also made it quite clear that he could not be extradited to Uzbekistan. It is quite possible that their ‘Russian papers’ were not in order, but only because the Russian authorities were refusing to regulate the situation.

There is nothing to suggest that either in the past, or during recent years in Crimea, Rakhimov had been involved in anything that could legitimately be considered ‘terrorist’.  Russia is, however, using flawed charges of ‘involvement in Hizb ut-Tahrir‘ to imprison and / or sentence over 80 Crimean Tatar and other Ukrainian Muslims, the majority of whom are civic activists, to huge terms of imprisonment.

The cynicism of claiming that Rakhimov was “an armed terrorist” is even more shocking, coming as it does on a day which saw a tragic school shooting in Kazan (Russian Federation).  If Russia’s FSB at home, and in illegally occupied Crimea, spent less time staging armed operations, including this fatal one, against men peacefully bringing up their families and practising their faith, they might manage to avert real acts of terrorism.

Having killed Rakhimov in extremely suspicious circumstances,  the FSB have initiated criminal proceedings under Article 317 of Russia’s criminal code (attempt on the life of an enforcement officer).  Sakhiba Bukhanova was taken away after the search of their home, initially to the migration office, and then to the ‘Investigative Committee’ offices.  This was purportedly for interrogation, however as of the early hours of 12 May, she had not been released.  The couple’s four children, two of whom are still very young, have lost their father and now do not even know what has happened to their mother.

In a further disturbing development, the FSB later in the day came for the family who own Rakhimov’s home.  Having initiated ‘criminal proceedings’ against a man they had just killed, they then took the house owners Seidamet Gafarov and his wife away for interrogation.  They too appear to still be in custody, and it would appear that at least Seidamet Gafarov has been detained.