Ukrainian gets suspended sentence for T-shirt with Soviet symbolUkrainian student sentenced for ‘propaganda of communism’ on Facebook’Decommunization’ in Ukraine Carried Out Using Communist Methods5 years for a red flag? Controversial decommunization law used against Ukrainian veteransUkraine’s Decommunisation Law hammered by Venice Commission for violating democratic standardsUkraine’s Communist Party OutlawedCommunist party ban will be slammed in Strasbourg, along with original decommunization lawPresident signs dangerously flawed ‘decommunization’ laws"Decommunization" Laws: Deeply Divisive and Destined for StrasbourgAnalysis of the Law on Prohibiting Communist SymbolsParliament ignores public opinion on Ukraine’s history. Will the President?Politicizing History: Parliament adopts Dangerously Divisive LawsPhantoms are phantomsFighting phantomsNo dossier on ShukhevychWorking to reveal the truth about OUN and UPAMore information from SBU archivesSBU is planning to tell the truth about Soviet efforts at discrediting the UPAPresident called on to help lift the seal on KGB archivesOn the 65th anniversary of UPA the arguments still rage
• Topics / Freedom of expression 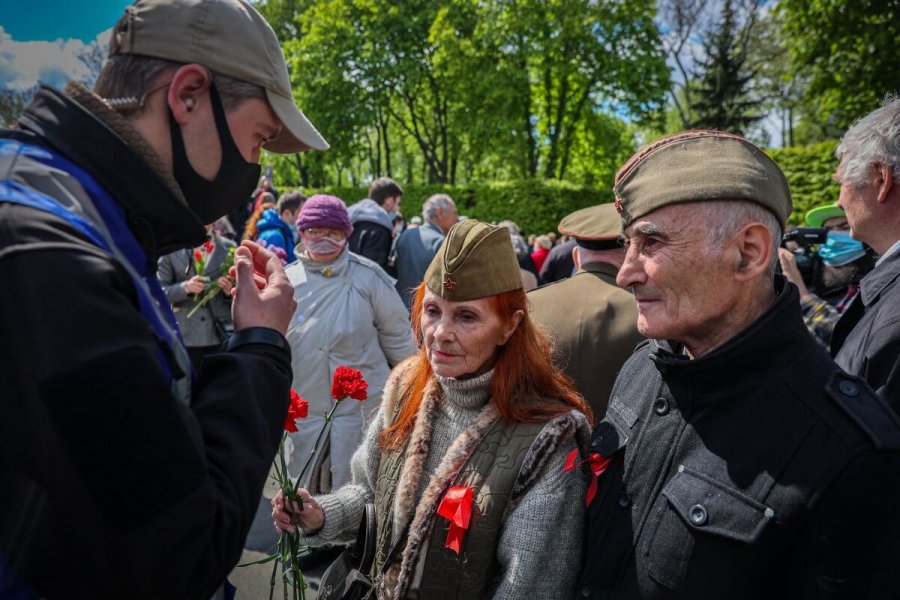 Ukraine’s police were especially active on Victory Day (9 May) this year, with 11 criminal prosecutions initiated under a highly controversial decommunization law.  Those potentially facing up to a five-year prison sentence include the son and grandson of a soldier who was among the Soviet forces who liberated Berlin in 1945.  The grandson, Serhiy Zastavsky, had erected the ‘flag of victory’ on a lamppost in his Zaporizya oblast village.  The red flag certainly does have the hammer and sickle on it, but it is also the flag which Soviet soldiers, including his grandfather, raised over the Reichstag during the Battle of Berlin on 2 May 1945.  He erected it, he says, in memory of his grandfather and of those who perished, and he is determined to uphold his right to do so in court.

Of the 11 cases that Graty has learned of, two involved either a Nazi symbol or a Nazi salute [the so-called ‘sieg heil’].  The 16-year-old who very ostentatiously used the salute near an elderly man wearing military uniform and awards, could not, however, be prosecuted for the salute itself which legislators clearly forgot to add to the very long list of prohibited Nazi and communist symbols.  The Kyiv police instead drew up a protocol on administrative proceedings under Article 173 of the Code of Administrative Offences – ‘petty hooliganism’.

The fact that the Law on the Condemnation of the Communist and National Socialist (Nazi) Regimes and Prohibition of Propaganda of their Symbols [hereafter the Law],  does not envisage criminal prosecution for a Nazi salute but does for the flag which those who fought the Nazis raised in 1945, is only one of many problems with the so-called ‘decommunization’ bills that were signed into law in May 2015.  It has since received an extremely negative opinion from the Council of Europe’s Venice Commission and the OSCE Office for Democratic Institutions and Human Rights (OSCE/ODIHR) and it is very likely that the European Court of Human Rights will find that Ukrainians’ rights have been violated over prosecutions under the law.

Before considering other more legal arguments against decommunization measures, it is worth noting that the law in question is very simply divisive, as was apparent from some of the above-mentioned 11 cases.  Although the National Police seem to have been particularly zealous in 2021, and even issued a warning on the eve of Victory Day about possible administrative or criminal liability for the use of the symbols of the totalitarian regimes, the law has been enforced in previous years as well, in particular over car rallies on 9 May and over communist symbols in a newspaper called ‘Victory Regiment’.

In some previous prosecutions, the people involved have preferred to simply ‘admit guilt’, presumably fearing worse sentences if they argued.  In 2019, for example, one person received a one-year suspended sentence merely for wearing a T-shirt with the Soviet state symbol with the hammer and sickle and five-pointed star.  Another young student received a 2.5 year suspended sentence for communist symbols on social media.

Very many Ukrainians (and not only they) believe that it is entirely acceptable to ban Nazi symbols, and that there are no grounds for treating the Soviet regime, which also killed millions (through Holodomor, the Great Terror, the Deportation of the Crimean Tatar people, and many other crimes) any differently.

The problem is that in at least two of the cases on 9 May, people were honouring the memory of their own relatives.

50-year-old Serhiy Zastavsky had erected the Soviet flag of victory in memory of his grandfather and others who died during that battle, and he has no intention of ‘admitting guilty’.  It seems clear that his neighbours agree with him.

When ‘an investigative-operational group’ turned up in the village, Zastavsky told them that he had not known of criminal liability for the flag and said that he would immediately remove him.  The police, however, did not allow him to do so, saying that it would be removed in the presence of formal witnesses.

That was when the situation turned to farce since most residents of Razdol refused to have anything to do with the police action.  According to Zastavsky, residents were coming up and abusing the police for taking the flag down.  He says that the police officer finally found “a couple of down-and-outs from a neighbouring village”, with all of this having taken an hour and a half.   Zastavsky is quite adamant that he did not wave Soviet flags, did not call on people to join the Soviet Communist Party and says that he was never a party members.  “This is the Victory flag and I don’t consider that it is a communist symbol”.

In Odesa, a woman in her sixties came to the Avenue of Glory with portraits of relatives who took part in the War and images of their military honours.  She refused to remove them and was eventually escort from the park.

It is unclear whether she will face consequences, and what her position will be.  Zastavsky, however, told Graty that he will certainly fight any prosecution in court.  “In the centre of Kyiv, they sieg heil and nothing, there are no criminal prosecutions. They’re allowed.  And if my grandfather shed his blood, he’s not allowed, and I can’t.  How is that?”

All four ‘decommunization’ laws were controversial within Ukraine.  It was, however, specifically the above law prohibited Soviet and Nazi symbols that was examined by European constitutional law experts, mainly because of the serious prison sentences envisaged).  The Joint Interim Opinion   from the Council of Europe’s Venice Commission and OSCE/ODIHR  found that the Law had serious failings which could infringe people’s right to freedom of expression and of association.

The constitutional experts were careful to stress that the Law has a legitimate aim, and that Ukraine has the right “to ban or even criminalise the use of certain symbols of and propaganda for totalitarian regimes”.  Nonetheless, the Law’s scope was much too broad and the sanctions, including long terms of imprisonment, envisaged too severe.

The Law bans what is called “propaganda of communist and / or National-Socialist (Nazi) totalitarian regimes” and the symbols of these, with the list of such symbols extremely broad.  It prohibits the creation and orders the forced termination of any legal entity propagating communist and / or Nazi regimes, or that uses their symbols.

Propaganda is understood as referring to one of the following: Public denial “of the criminal nature of the communist totalitarian regime of 1917-1991 in Ukraine” and the Nazi regime; Circulation of information aimed at justifying the criminal nature; the activities of the Soviet security service, the establishment of Soviet power or the fight against participants in the struggle for Ukraine’s independence in the XX century; Preparation and / or circulation, as well as the public use of products which contain communist or Nazi symbols.  The Law does not apply to academic works, textbooks, etc. but only on condition that the works do not lead to denial of the criminal nature of the entire Soviet regime in Ukraine and the Nazi regime.

The constitutional law experts issued a number of key recommendations, including the following:

A less extensive and exhaustive list of symbols should be provided.

There should be clear definition of the term ‘propaganda’, especially when it is used for the purpose of criminalising conduct.

Denial of crimes must relate to specific crimes “and not to the mere "criminal nature" of a regime as a whole, with this viewed as too vague.

"Only those acts that constitute an actual danger to society should entail criminal responsibility, which should be proportionate to the seriousness of the offence committed. A mere display of a symbol or use of a name should not result in imprisonment.

The recommendations have yet to be implemented.