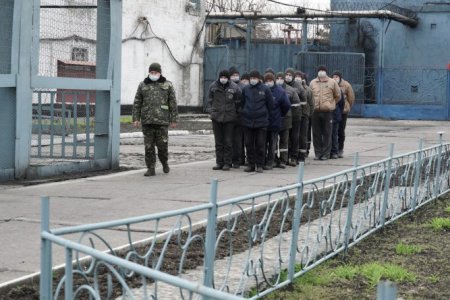 Special Rapporteur on torture and other cruel,

inhuman or degrading treatment or punishment;

Office of the United Nations High Commissioner for Human Rights

Our organisations would like to alert you to the dangerous direction taken by the Ukrainian government's policy in the fight against torture in Ukraine's prisons, which we believe requires your intervention.

Indeed, while the widespread use of ill-treatment, sometimes amounting to torture, in three Ukrainian prisons had justified a visit "dictated by the circumstances"[1] by the European Committee for the Prevention of Torture (CPT), the position that the Ukrainian Government has just taken[2] regarding the conclusions of the resulting report constitutes an alarming message in favour of impunity.

It should be recalled that the CPT noted in its report that during the visit a number of credible allegations of physical ill-treatment of convicts by staff or their assistants from among convicts in colonies Nos. 25, 77, 100 were received. In colony No. 25, in some cases, such behaviour was so terrible that it could be considered torture. Thus, among other cases mentioned, according to evidence considered credible by the CPT, a convict was tied to a bed with a rope for 6 days, completely restricting his movements and was forced to urinate and defecate under himself for all 6 days (see §15, 16). Another convict stated that was completely stripped naked and his arms and legs had been tied up with tape, strangled with a wet towel and a plastic bag, he was severely kicked and punched, his buttocks were burned with a burning newspaper, and then he was sodomised with a truncheon (see §17).

In their response, the Ukrainian authorities claim that the information received by the CPT during the visit was provided by certain negative-oriented prisoners with the purpose to undermine the authority of the administration and challenge the detention regime (§53-55). The Ukrainian authorities claim that the three establishments in question are visited too frequently for the facts denounced by NGOs, human rights defenders and prisoners to be real. As regards more specifically the events highlighted by the CPT, the authorities claim that these allegations are not confirmed by the SBI's investigations or by internal enquiries. The authorities claim that the pre-trial investigation established that the administration of Colony No. 77 was not involved in any illegal actions or abuse of power (§96, 98). The report implicates the administration's auxiliary detainees, while denying any responsibility of the administration. Secondly, with regard to Colony No. 25, the authorities maintain that the investigation did not confirm the allegations of torture (§92). However, the investigation of allegations of crimes in connection with torture of convicts in colony No. 25 is still ongoing. It appears that the government's response is confused, to say the least, and ignores the issues relating to the torture incidents in 2019 highlighted in the report. In addition, the response refers to disciplinary sanctions, but without specifying the reason or nature of the sanction imposed. As regards the events at Temnivska Colony No. 100, the authorities provide no response to the questions posed by the CPT.

In other words, the authorities openly maintain that the CPT has allowed itself to be manipulated in three different places by informal groups of the prison mob, who have used it to undermine the authority of the administration. In so doing, they have completely failed to indicate how, in their view, the forensic evidence gathered by the Committee or the evidence provided to it by the SBI, which supports the allegations of torture, is not valid.

The authorities' position is all the more unjustifiable as on 1 April 2021, the Office of the Prosecutor General issued an order for the Deputy Minister of Justice, in which he pointed out next: “An inspection of the Office of the Prosecutor General confirmed most of the violations of the rights of convicts, identified in Colony No. 77 during the visit of the CPT and still unresolved, despite the fact that a number of them did not require significant material costs.” (Appendix No. 1).

This was not published in the response of the Ukrainian authorities, but after the visit of the CPT in 2020 and the publication of the report, the head of Colony No. 77 was promoted as Deputy Head of the Department for Security Organisation of the central prison administration by the order of the Minister of Justice, and received gratitude “for conscientious work and high achievements”.[3] His powers extend to all regional administrations and penitentiary institutions, including Colony No. 77, and his responsibilities include, among other things, monitoring the legality of the use of physical force, special means for convicts (point 2.3), conducting official investigations into violations of the law in penitentiary institutions (point 2.31), taking explanations from officials of territorial penitentiary administrations, institutions and their detainees (point 2.32), checking the quality of official investigations conducted by territorial administrations and institutions (point 2.33). On 26.01.2021 his deputy was appointed head of Colony No. 77. On 19.03.2021, he was transferred to the position of Head of the Department of Social and Educational Work and Ensuring the Rights of Convicts of the South-Eastern Interregional Department for the Execution of Sentences. His powers extend to all interregional institutions, including Colony No. 77, and his responsibilities include assisting in the observance of the rights of prisoners and the implementation of international standards for the treatment of prisoners (point 2.8), organising and conducting official investigations into violations of the rights of prisoners (point 3.10).

On 08.04.2021, Colony No. 77 was visited by human rights defenders of the Ukrainian Helsinki Human Rights Union, a member of the Parliament and Ombudsman Secretariat’s officers, who recorded numerous violations of the rights of convicts indicated in the CPT's Report, among them are the mass beating of all newly arrived convicts in the colony, the existence of physical and moral pressure from the so-called “assistants” of the administration, the impossibility of sending complaints, the lack of interaction with the legal aid center.[4]

At a meeting of the Committee of the Verkhovna Rada on Human Rights on 28 April 2021, the Minister of Justice expressed his intention to close the Colony No. 77.[5] This announcement, if it is actually implemented, will be an adequate response only if it is accompanied by (1) an explicit and unambiguous acknowledgement of the ill-treatment inflicted and (2) effective and thorough investigation of allegations of ill-treatment, the suspension from duty of prison officers while being investigated or tried and the imposition of the criminal and disciplinary sanctions required by international law.[6]

It should also be noted that multiple incidents were recorded by KHPG concerning prisoners who interacted with the CPT during its visit (Appendix 2).

In addition, the authorities have refuted the use of duty prisoners for law enforcement purposes in Colonies No. 25 and No. 100, while admitting the use of such groups of prisoners in Colony No. 77. However, the Government has no plans to follow the CPT's recommendations (para. 27), which are long-standing and insistent requests, to take positive steps to stop their use.  It should be stressed that this request is not a peripheral aspect of prison policy, but the core of the Convention, as it is well established that these groups are regularly used to enforce order through terror.

At the above-mentioned meeting of the Rada on 28 April 2021, the Minister of Justice referred to the plan to create an experimental prison facility in parallel with the closure of Colony No. 77, which could serve as a model for a transformation of the Ukrainian penitentiary system and begin a break with the Soviet legacy and the dichotomy between "black prisons" dominated by the criminal underworld and "red prisons", where discipline is enforced by the administration in a brutal manner. While the recognition of the deleterious effects of current modes of policing and discipline is a step forward, the authorities must immediately take all necessary steps to end the use of auxiliary detainee contingents. This cannot be put off pending the results of an experiment that would have pedagogical value for the system as a whole.

The evidence provided, as well as the complete lack of political will reflected in the authorities' response, points to the failure of the reform of the torture investigation mechanism, if a significant capacity building does not take place soon. In this regard, not a single person guilty of violence against convicts in Colonies Nos. 25, 77, 100 has been notified even of the suspicion. More broadly, During the three years of the State Bureau of Investigation (SBI) activity from 2018 to 2021, only one employee of the penitentiary system was charged with an indictment for ill-treatment (§82).

To ensure the protection of the detained population and not to allow the idea to take hold at the level of both the prison administration and society that the imperatives of the fight against torture can be relativised, it seems to us essential that you make an urgent appeal to the Ukrainian authorities to take urgent protective measures, to significantly strengthen the investigative capacity of the SBI and to adopt a zero tolerance policy towards ill-treatments.

Similar statements have been sent to:

2. Monitoring Mission of the Office of High Commissioner for Human Rights in Ukraine

3. Ambassador, Head of the EU Delegation to Ukraine

4. Secretary-General of the Council of Europe

5. Commissioner for Human Rights of the Council of Europe

6. Committee on the Honouring of Obligations and Commitments by Member States of the Council of Europe