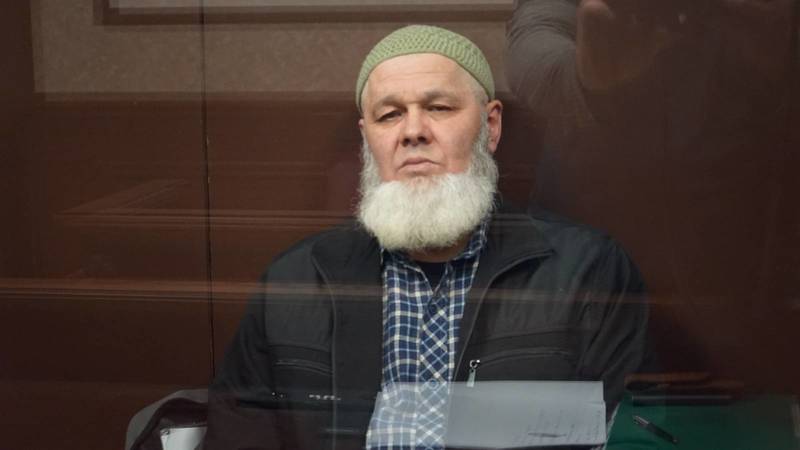 One of Russia’s cloned ‘trials’ of Crimean Tatar civic journalists and activists has been postponed for the second time in a week because 61-year-old Servet Gaziev was in such acute pain that he could not stand.  The situation was so serious this time that the hearing was postponed for almost a week, however it is more than likely that the prison staff will continue giving only painkilling injections which Gaziev’s sister, who is a doctor, believes are only compounding her brother’s grave condition.

It was clear on 20 May even to the prison convoy staff and court secretary that medical help was urgently required and an ambulance was called.  The ambulance team recommended at least four hours lying down, a proper medical examination and the appropriate treatment. This is undoubtedly good advice, but, as lawyer Aider Azamatov points out, there was nowhere in the room that Gaziev was placed in for him to lie down and both during the journey to the court and in the court building, he could only sit.  At least the presiding judge did adjourn the hearing until 27 May and instructed the prosecutor to ensure, via the prosecutor overseeing the SIZO [remand prison] that Gaziev “is provided with medical care”.  Azamatov says that they will be seeking Gaziev’s transfer to a hospital, and have sent appeals to the Russian Ombudsperson.  Optimism would seem premature, unfortunately, since former police major and MP, Tatiana Moskalkova, has thus far invariably failed to react where the rights of Ukrainian political prisoners are being violated.

Gaziev’s condition has clearly deteriorated, but he has long complained of acute pain in the stomach area, and evidently needed proper medical care, not just painkillers. His sister had come to Rostov for the latest hearing and tried to get it through to the court secretary that her brother needs hospitalization. The secretary claimed that this was not for the court to decide, however thus far the SIZO administration have failed to react to her appeals that her brother receive proper treatment.

According to Gaziev’s sister, the doctors who needed to be called during the last court hearing diagnosed that the 61-year-old, who has been imprisoned for over two years, is suffering from chronic cholecystitis.  This is an inflammation of the gallbladder, causing abdominal pain, vomiting and possibly fever.  Like any recurring pain, especially in someone of Gaziev’s age, it is clearly inappropriate, and very likely dangerous, to keep merely administering painkillers.

Russia’s armed operation against 25 peaceful Crimean Tatar civic activists and journalists on 27 March 2019 (in two cases a little later) aroused such international condemnation that Moscow has since tried to keep the men out of sight.  Their ‘trial’ has now been separated into five identical clones, with all of them underway in parallel at the Southern District Military Court in Rostov used for the vast majority of political trials of Crimean Tatar and other Ukrainian political trials.

Gaziev is not the only man in his group to have grave medical problems.  Dzhemil Gafarov, who will be turning 59 on 31 May, suffers from pre-dialysis stage kidney disease.  Given his state of health, even Russian law should have prohibited him from being held in detention, but such explicit regulations are ignored when it comes to political prisoners.  Gafarov recently developed gout, which is directly linked to his kidney failure, as well as to the SIZO staff’s refusal to provide proper medical care.

Both men are now on trial together with three other Crimean Tatars: Alim Karimov; Seiran Murtaza and Erfan Osmanov.  All of them had actively attended political trials or taken part in helping political prisoners and / or their families.

Servet Gaziev had been in ill health prior to his arrest and had not been able to work.  He did, however, help the wives of political prisoners who have been left to bring up their children alone.

The 25 men are all facing sentences of 10-20 years’ imprisonment in the worst of Russia’s appalling prisons.  Not one is accused of a recognizable crime.  All the Crimean Tatars arrested either on 27 March 2019 or, in the cases of Rayim Aivazov and Eskender Suleymanov, soon afterwards, are charged solely with ‘involvement’ or ‘organization’ of a Hizb ut-Tahrir group.  This  is a peaceful, pan-Islamist party which is legal in Ukraine.  In 2003, Russia became the only country in the world (since 2016 joined by the even more repressive Uzbekistan) to call Hizb ut-Tahrir ‘terrorist’.  No adequate reason was ever provided for so labelling an organization which is not known to have carried out acts of terrorism anywhere in the world, yet since 2014 Russia has been using the 2003 Supreme Court ruling as pretext for imprisoning men for up to 24 years without any crime.

PLEASE HELP by contacting politicians and human rights groups in your country and asking them to react to a situation where men who have committed absolutely no crime face sentences of up to 20 years, imposed by the aggressor state which invaded and occupied the men’s homeland in 2014.

The situation is obviously especially acute for Servet Gaziev and Dzhemil Gafarov whose very lives are in danger.