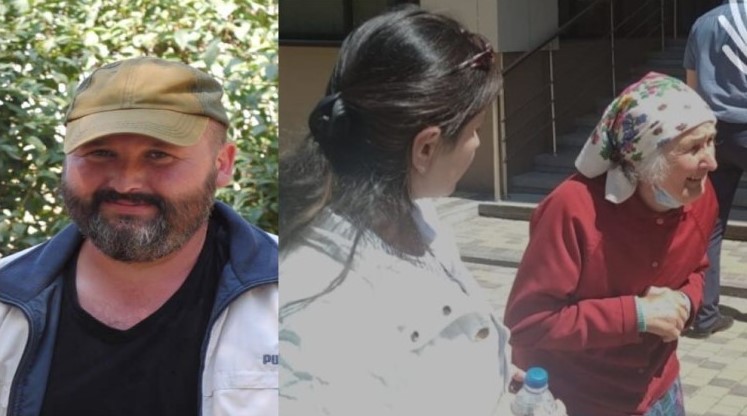 Ivan Yatskin in an earlier photo, Taisia Yatskina and Yatskin’s wife, Gulnara Kadyrova prevented from being present when sentence was announced on 21.05.2021 Photo Crimean Process

The Crimean High Court under Russian occupation has found Ivan Yatskin, a Ukrainian living his native Crimea, guilty of ‘state treason in the form of spying’ for Ukraine.  In declaring Yatskin a political prisoner, the authoritative Memorial Human Rights Centre earlier pointed out that there was no information about enforcement officers in occupied Crimea that could constitute a ‘state secret’.  Yatskin had never concealed his opposition to Russian occupation of Crimea and that is surely what prompted his arrest and now this horrific sentence.

Russia’s FSB particularly like ‘spying’ or ‘treason’ trials which can be held behind closed doors.  Even where, as in this case, the defendant does not break under pressure and insists on having an independent lawyer, the latter is forced to sign an undertaking not to disclose any details.  Although Yatskin denies the charges, the ‘trial’ was over in a month, with only a few hearings during that time.  Yatskin’s lawyer is Nikolai Polozov who has represented a number of Crimean Tatar or other Ukrainian political prisoners since 2014.  He reported the sentence on 21 May and announced that they would be lodging an appeal.

The prosecution, represented by Sergei Ivanovich Chukhrayev, had demanded a 12-year sentence in a harsh regime prison colony.  The panel of ‘judges’ – Alla Nikolayevna Khinevych (presiding); Yelena Anatolievna Spasenova; and Vera Vasilievna Yevdokimova – sentenced Yatskin to 11 years’ in a harsh regime prison colony, with a further year’s ‘restricted freedom’ after that.  Even the sentence was announced behind closed doors, meaning that Yatskin’s elderly mother and his wife were not able to be present.

Yatskin is 42 and from the village of Voikovo in Crimea.  He has an older son and daughter from a previous marriage, as well as two small sons and a baby daughter with Gulnara Kadyrova.  He has scarcely seen his youngest child who was born a few months after armed FSB officers, many in masks, burst into family’s home on 16 October 2019 and took Yatskin away.  The supposed ‘search’ carried out that day was suspiciously cursory, with the FSB not removing any mobile phones, although that would have been an obvious place to start had they genuinely believed that Yatskin was a ‘spy’.  The FSB were led by a Russian investigator, Sergei Makhnev, who has been involved in a number of political trials, especially involving Crimean Tatars.

The arrest fell on the eve of Ivan’s mother’s birthday,, and the elderly lady was expecting them to visit that day.  Gulnara Kadyrova earlier recounted how she had arrived at her mother-in-law’s home with the children. Taisia Yatskina came out to greet them with a big smile and asked “but where is Ivan?”  That was one of the hardest moments, Gulnara says, having to explain that Ivan had been taken away.

The timing of Yatskin’s arrest is significant for another, much more cynical, reason.  He was one of several Ukrainians (including one woman in her 60s, Halyna Dovhopola) seized within a month or two of the Kremlin’s last major release of Ukrainian political prisoners, almost certainly in order to get key MH17 witness Vladimir Tsemakh away from the Ukrainian and Dutch prosecutors (details here). There is next to nothing known about the charges against Dovhopola and Denis Kashin, yet they, and Oleh Prykhodko, shared one important feature with Yatskin – their pro-Ukrainian views.

While information about the charges against Yatskin remains scant, there was enough for the authoritative Memorial Human Rights Centre to declare him a political prisoner even before the trial began.  In their report, they assess the little that is known about the charges of ‘state treason via spying’ under Article 275 of Russia’s criminal code.

In explaining why Yatskin should be considered a political prisoner, Memorial HRC examines what the alleged ‘state secrets’ could have consisted of.  There is some suggestion that Yatskin may at some earlier stage served in the Ukrainian police force and could well have known former Ukrainian offices who later breached their oath and joined the Russian police.  Although some information about search and operations activities does fall under the category of state secrets, this pertains to details about methods; forces; plans; results; financing; etc), as well as about current or even former secret agents.

Even if Yatskin himself served in the police force, this was before Russia’s annexation.  Any information he had would have pertained to activities under Ukrainian law, and not applicable under Russian legislation.  Memorial notes that total secrecy about this or that law enforcement unit is inadmissible and can only foster abuse.

Yatskin’s rights were, at very least, violated over his total isolation for two months, with this making it hard for him to get legal representation and giving the FSB scope to exert pressure on him.  Even after Polozov took on the case, brutal treatment and threats against his family were used to try to break the Ukrainian’s resolve.

Memorial writes that Yatskin had travelled to mainland Ukraine and took part in gathering things to help the Ukrainian Army fighting in Donbas. It is possible, Memorial adds, that he may have himself taken part in the fighting as a volunteer, and certainly he did receive treatment later for an injury.  He also took part towards the end of 2015 in the Crimean Blockade.

Yatskin’s persecution, Memorial says, is part of the constant anti-Ukrainian campaign run since the end of 2013 in the state media and seen in the statements of high-ranking officials in Russia. “One of the components of this campaign has been the initiating of criminal prosecutions against citizens publicly expressing a position on events in Ukraine that diverges from the official stand and directly against Ukrainians”.  These include a large number of cases over so-called terrorism or spying.   All of such prosecutions are additionally illegal and in violation of international law which prohibits an occupying state from applying its legislation on occupied territory.