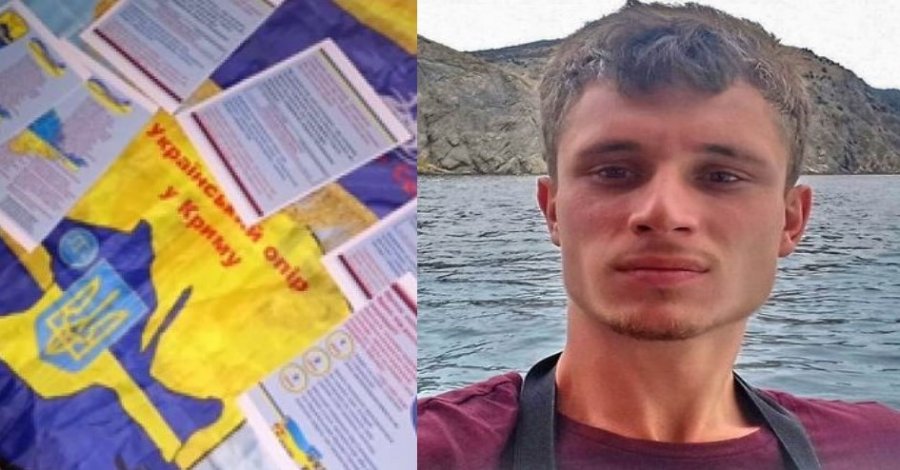 A Russian-controlled court in Yevpatoria has convicted Alexander Dolzhenkov of ‘creating an extremist organization’ and sentenced him to a year’s imprisonment.  The charges against the 23-year-old, a student and / or recent geology graduate of Odesa National University, pertained to leaflets stressing that Crimea is part of Ukraine, a position held by the entire international community but which Russia calls ‘extremism’.  Since the FSB first showed a video of the arrest of Dolzhenkov in September 2020, the year sentence will not be much longer than he has already spent in custody, however the young man’s claimed ‘remorse’ may well have been because he was deprived proper legal representation and, very likely, tortured.

The so-called Yevpatoria City Court on 21 May 2021 reported that a sentence had been passed against a Ukrainian citizen “for the creation of an extremist society” (Article 282.1 § 1 of Russia’s criminal code). The report identifies Dolzhenkov only by the initial D, and calls him “a student of the geology and geography faculty of a Ukrainian university”.

It is claimed that in 2018, Dolzhenkov “created a group in a social network; drew up the charter, structure and the symbols of an extremist society in order to return the republic of Crimea and the city of Sevastopol under Ukraine’s jurisdiction. He actively recruited its members from among residents of the Crimean peninsula, and called for unlawful actions”.

The report goes on to say that he “was uncovered and detained by FSB officers who already knew of his criminal activities”.

Dolzhenkov, it is asserted, admitted guilt “and repented of what he had done”, saying that he “had fallen under the influence of a group of Ukrainian students with radical national views, as well as of propaganda in the Ukrainian media”.

As mentioned, the FSB use torture and other illegal methods to extract ‘confessions’ and ‘cooperation’ with the investigators.  In this case, the ‘court’ cites this alleged remorse, “active cooperation”, as well as his state of health, for a sentence which, frankly, could have been worse.   The sentence has yet to come into force, however it seems unlikely that it will be appealed.

The video of Dolzhenkov’s arrest on 19 September 2020 focuses solely on what look like innocuous pro-Ukrainian leaflets, entitled ‘Resistance in Crimea’. The FSB asserted that Dolzhenkov came to Crimea “to look for accomplices in order to destabilize the socio-political situation in the region. In September 2020, the Ukrainian circulated leaflets containing calls to action aimed at violating the territorial integrity of the Russian Federation.”

At that stage the charge cited was under Article 280.1 – so-called ‘calls to action aimed at violating Russia’s territorial integrity’.  This norm came into force several months after Russia’s invasion and annexation of Crimea and has, as feared, been used to persecute Ukrainians and some Russian citizens for correctly stating that Crimea is Ukrainian territory which Russia is illegally occupying.

On 22 September 2020, the FSB and Russian-controlled media reported the arrest of two young people, identified only as a 22-year-old Ukrainian citizen and a 28-year-old from Yevpatoria, described as a Russian citizen.  Russia has made it all but impossible for Crimeans to not take Russian citizenship, so this essentially indicates only that the older man lives in Crimea.  Both were said to have “circulated extremist material”, however the 28-year-old was also, purportedly, accused of having “threatened to blow up administrative buildings on social media”.  The 28-year-old, who has not been identified, was claimed to have been “involved in the public justification and propaganda of terrorism and extremism.”  Everything, from the shouts as three FSB men stormed in, was designed to create the impression that the 28-year-old, initially seen on the video only in shorts / underwear, was a dangerous criminal.  The FSB asserted that this man from Yevpatoria “using his page in a social network, sharing and supporting the activities of Ukrainian national groups, posted material with threats to carry out explosions of administrative buildings in Crimea.  The individual is also involved in circulating agitation leaflets of an extremist nature.”

The FSB asserted that they had found and removed components of explosive devices , items that look like firearms and bullets and extremist leaflets.  There was nothing to indicate that there were independent witnesses present when the armed and masked FSB men allegedly made their ‘find’, and it is next to impossible that a lawyer was present.  The anonymity in his case is very worrying as serious charges were cited: Article 205.2 § 1; Article 280 § 1 and 280.1  - ‘public calls to carry out terrorist activities; public calls to extremist activity and calls to action aimed at violating Russia’s territorial integrity.’