Abducted journalist’s life is in danger in Belarus. Not only his while Lukashenko and Putin get away with terrorism 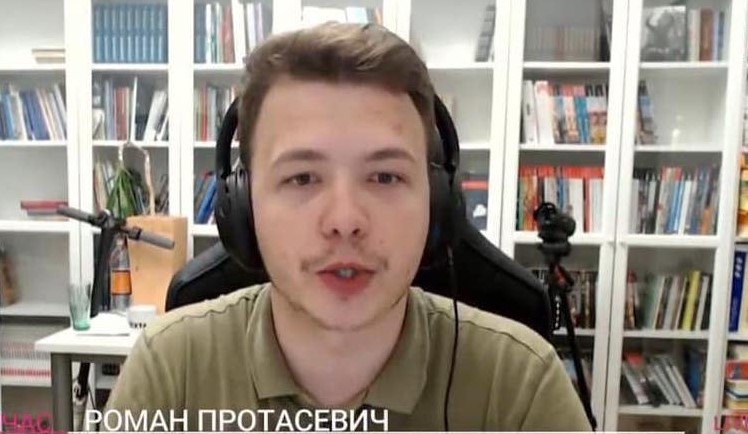 As of late evening on 23 May 2021 Belarusian opposition journalist Roman Protasevich is in KGB captivity and Ryanair is failing to explain why, when it was closer to the Lithuanian border, it made an emergency landing in Minsk.  Western countries are expressing outrage, but it remains to be seen whether Aleksander Lukashenko’s regime will face more than criticism.  If not, then Lukashenko will know that, like his Russian counterpart, Vladimir Putin, he can get away with state terrorism.  The message to the world on this occasion will be especially ominous, as state operatives will have been allowed to hijack an international flight in order to abduct a journalist with political asylum in Poland. Impossible not to agree with Russian political analyst Andrei Piontkovsky, that “this is the last moment of truth for the West.  If the Lukashenko regime is not immediately declared a terrorist organization, there is no West or Free world.”

Roman Protasevich [Bel: Raman Pratasevich] is an opposition activist and former Chief Editor of Nexta and Nexta Live, Telegram channels that were hugely important in reporting on the protests against Lukashenko’s rigged elections last August and the resulting repression.  It is outlawed in Belarus as ‘extremist’.  Protasevich is now editor of another opposition channel – Беларусь головного мозга . The ‘terrorism’ and ‘mass riots’ charges that he faces in Belarus are linked solely to those peaceful journalist activities. Realizing that the plane was landing in Minsk, Protasevich told fellow passengers that he faced the death penalty in Belarus.  This should not be viewed as exaggeration.  Belarus is no law-based state and any charges can be concocted.  Protasevich’s abduction also comes a day after the death in prison of another civic activist Vitold Ashurak.  The 50-year-old supposedly died of heart failure, however his wife is adamant that he did not suffer from any heart problems.

The Ryanair plane carrying Roman Protasevich was flying between two EU countries, Greece and Lithuania, with this another reason for asking why the plane was diverted to Minsk.   Even if, as Ryanair has apparently informed the Guardian, it was ordered by air control to land in Minsk, was it obliged to obey when this made no sense given that it was closer to its destination airport, namely Vilnius?  The fake bomb alert was passed on by the Belarusian air control, with a farcical ‘search’ for explosives carried out at Minsk Airport, with the other passengers then forced to wait until after 20.00 to continue on to Vilnius.

Ryanair’s tweet after the plane landed at its destination is disturbing in what it omits. There is no mention at all of Protasevich having been taken off the flight, most certainly against his will, nor of the journalist’s friend Sofia Sapega and four Russians  also reportedly having remained behind in Minsk.  The tweet in fact gives quite the contrary impression, that this was merely an enforced “delay” for everybody.

The Telegram channel Pul Pierwogo, which is linked with Lukashenko’s press service, presented Lukashenko’s “personal order to land the plane in Minsk” as being because “the most important thing is the safety and life of people” and claimed that “Belarus protected Europe”.

State media can try to sell that version in Belarus, and, with the help of Russian propaganda media, also in the Russian Federation.  In EU countries, including Poland where Protasevich is based, and has political asylum, the Lukashenko regime’s actions have been called state terrorism, hijacking and piracy.  All terms are terrifyingly appropriate, but it remains to be seen whether Lithuania’s calls for real reaction from the EU and NATO, and suspension of flights over Belarusian airspace, are heeded.

An effective hijacking is, as Lithuanian President Gitanas Nauseda has said, ‘unprecedented’, but the state terrorist tactics used by both Belarus and Russia are not, however neither country has faced truly serious sanctions.  Perhaps Western countries were basically unperturbed by Ukrainian teenager Pavlo Hryb being abducted by the Russian FSB, clearly with Belarusian connivance, from Hrodno in Belarus in August 20 2017.  Both countries have, however, sent hit squads to EU countries to kill opposition figures, with Russia, in particular, having used radioactive polonium (against Alexander Litvinenko) and the prohibited nerve gas Novichok against Sergei Skripal and his daughter.  The lack of real measures has given both Putin and Lukashenko a dangerous sense of impunity.  Why would either believe that the West had any red lines when, after Russia first tried to kill Alexei Navalny with Novichok, then imprisoned him, Germany is still continuing with Nord Stream II, and the US Administration has just waived crucial sanctions?

Lukashenko has just proven, as has Putin countless times, that there are literally no borders or limits that he will respect.  This is not a red line that the West can afford to ignore.