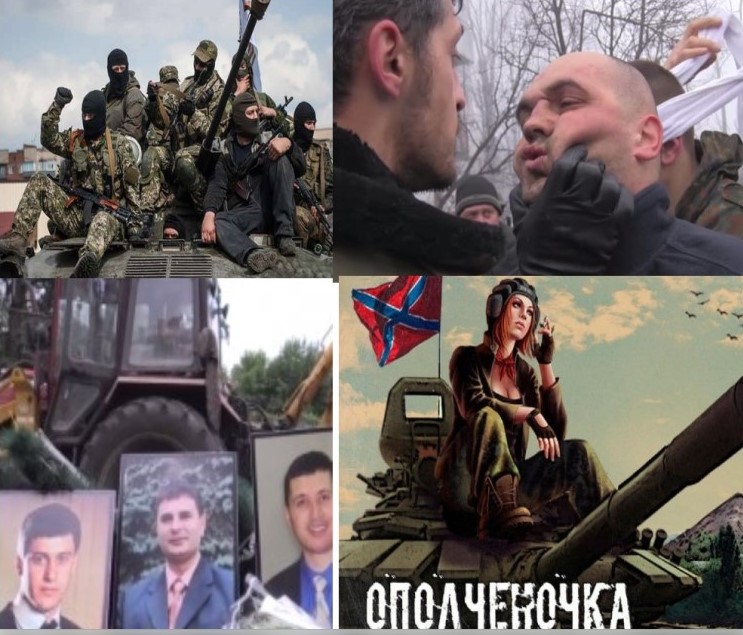 Militants, Givi mistreating Ukrainian POWs, bottom left one of the mass graves uncovered after Girkin and his militants fled Sloviansk, with photos of four victims and, finally, the ad for Opolchenochka, which presents a very different picture of the conflict

Russian and pro-Russian propagandists are shouting ‘sabotage’ after the first attempt in Russian-occupied Sevas to show a propaganda film about the fighting in the self-proclaimed ‘Luhansk people’s republic’ [‘LPR’] misfired.  Instead of the pro-militant film ‘Opolchenochka’ [‘Female insurgent’], scenes appeared from a film about Ukraine’s ‘Anti-Terrorist Operation’ against the Russian and pro-Russian militants who seized control of parts of the Luhansk and Donetsk oblasts in 2014.

From the video posted on YouTube, little is visible of the film that appeared instead of the scheduled propaganda, but Roman Razum, an ‘LPR militant’ and producer of ‘Opolchenochka’ explains that the film began and “we saw it wasn’t ours, but about some Ukrainian heroes”.  It was stopped almost immediately, and there was a short break while “their” film was being restored.  That did not save the militants’ day, as the projector was faulty and the quality of the film so bad, that they stopped it after 15 minutes.

‘Opolchenochka’ was made with the involvement of ‘LPR ministries’ and the so-called ‘people’s militia’, i.e. the Russian / Russian-controlled LPR ‘army’.  It was formally produced by the film company ‘Luhafilm’ company in the first half of 2019.  As well as female militants, the film contains scenes with Natalya Poklonskaya, the Ukrainian turncoat, who, in her post-invasion role as Russian-installed ‘Crimean prosecutor’, was involved in the first years of Russian repression in occupied Crimea.

Russia is now planning to show this propaganda film, in which Ukrainians defending their country are the enemy, and Russian or Russian-armed militants are “upholding peace on their land” at ‘Russian Centres’ around the world.

The propaganda drive is coming with a two year delay, for reasons that Russia’s propaganda machine will doubtless attempt to muffle.  The film is about three female militants, and was supposed to have a fanfare-filled premiere on 9 May 2019.

That plan, like the Sevastopol film showing, fizzled, and for a not dissimilar reason. It became known in March 2019 that Svitlana Driuk, former commander of the only women’s tank brigade in the self-proclaimed ‘Donetsk people’s republic’ [‘DPR’] and prototype for the main ‘heroine’ of ‘Opolchenochka’, had left occupied Donbas.  As soon as Ukraine’s SBU [Security Service] had succeeded in getting her children to government-controlled Ukraine, Driuk went public, stating that she was willing to cooperate with the Ukrainian authorities and that she had brought documents with her regarding Russia’s involvement in the conflict in Donbas.

Driuk’s defection will hopefully add material to the considerable weight of evidence that Ukraine has presented against Russia to the International Criminal Court; UN International Court of Justice and other bodies.  It was also a blow for Russian propaganda, where she had appeared often, including on a program presented by Moscow’s chief propagandist Dmitry Kiselyov.

At the time, Roman Razum claimed to Radio Svoboda that Driuk had not been the prototype for his film, although this is denied by Driuk herself, who says that Razum even came to show her the trailer for the film.

The above blips in Russia’s propaganda drive may seem humorous, but there is a very serious side.  After seven years of Russian occupation, the human rights situation in Crimea, as assessed by Freedom House, is not significantly higher than in North Korea.  There will, doubtless, be attempts to find out who was behind the disruption to the ‘Opolchenochka’ film showing, with those involved being in danger if discovered.

The other reason for little humour is that Russia is now planning a propaganda drive far beyond occupied territory, with the use of a seriously distorted films which turns the real situation in Donbas on its head.  ‘Opolchenochka’ is to be shown in the last network of so-called ‘Russian Houses’ run by Russia’s Rossotrudnichestvo, or Federal Agency for the Commonwealth of Independent States Affairs, Compatriots Living Abroad, and International Humanitarian Cooperation.  It seems likely that Russian state-funded media, including its international broadcaster will also take the opportunity to present the film as ‘presenting the truth about what is happening in Donbas’.

It is probably no coincidence that the film was produced by ‘LPR’ militants.  Far more information is known about Russia’s role in the conflict in ‘DPR’, not least because of the downing of Malaysian airliner MH17 with a Russian BUK missile in July 2014.  The trial of four men over MH17 is now underway in the Netherlands, with the Dutch Prosecutor and the Joint Investigative Team having already revealed considerable amounts of evidence about how the BUK missile launcher was brought to Donbas from a military unit in Russia and then hurriedly returned to the Russian Federation.  It has also demonstrated intercepted calls and other proof of direct lines of command between the Russian militants in control and the Kremlin, Russian Defence Ministry and FSB.

The links below detail just some of the lies and critical omissions in this new propaganda creation.