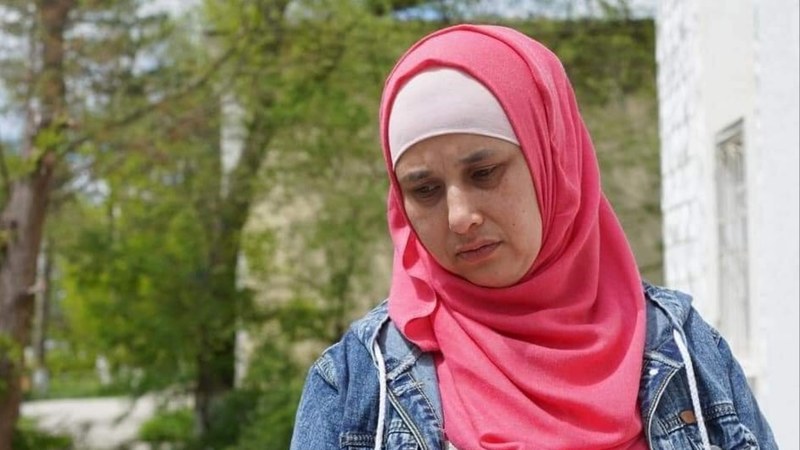 The European Court of Human Rights has halted Russia’s planned deportation of Sokhiba Burkhanova, who has been in Russian custody since the FSB killed her refugee husband, Nabi Rakhimov in occupied Crimea on 11 May.  This is the only good news, since Russia is refusing to return Rakhimov’s body to the family, essentially confirming the suspicion that the FSB tortured him to death and then staged a ‘shootout’.  .

ECHR has applied Rule 39, meaning that any deportation is halted, pending the Court’s consideration of Burkhanova’s application.  According to Darya Trenina, the lawyer representing Burkhanova in Strasbourg, the application has yet to be lodged, and, given the Court’s workload, it could take a long time to consider.  Despite Russia’s usual disregard for international law, it does usually comply with Rule 39 stays of procedure.

There is every reason to believe that the Court will eventually decide in Burkhanova’s favour, just as it upheld her husband’s application back in December 2014.  In the Case of Rakhimov v. Russia, the Court not only decided that Russia’s had violated Rakhimov’s rights, but also expressly prohibited Russia from extraditing him to Uzbekistan from where Rakhimov and his family had come to Russia, fleeing religious persecution.  Rakhimov was accused of involvement in Hizb ut-Tahrir , a peaceful transnational organization which is not known to have committed any acts of terrorism anywhere in the world.  Vitaly Ponomaryov, an expert from the renowned Memorial Human Rights Centre, believes that Russia’s Supreme Court declared Hizb ut-Tahrir  ‘terrorist’ in 2003 so as to enable the Russian authorities to forcibly deport asylum seekers like Rakhimov who faced torture and imprisonment in Uzbekistan.  Since 2013, when Rakhimov was detained in Russia, the FSB have been at least as repressive in their arrests and monstrous sentences against people accused, often on the basis of very flawed evidence, of ‘involvement’ in Hizb ut-Tahrir.  While the ECHR judgement referred only to Rakhimov, it is clear that all of the concerns regarding his safety if forcibly returned to Uzbekistan must apply also to his widow.

Rakhimov was killed on 11 May, and there is simply no good reason why, over two weeks later, the occupation authorities are refusing to hand over his body.  The couple’s four children, including 11-year-old Mariam and 15-year-old Takiuddin, have lost their father forever, and have not even been able to grieve as a family.  They have also seen their mother taken from them, and at least the two adult daughters would be in no doubt of the danger she faced if returned to Uzbekistan.

There would be no reason to not allow Rakhimov’s family to bury him if the Russian FSB did not have a lot to hide regarding how Rakhimov was killed.  Refusal to hand the body over must suggest that he did not die as claimed.

At around 6 a.m. on 11 May, an armed search first began at the Rakhimov home in the village of Zavetnoye.   It is illegal, but usual, for the FSB to prevent lawyers from being present, however it is important to note that on this occasion, nothing even resembling a search warrant appears to have been produced.  Nothing at all illegal was found, with the officers removing only technology, but also taking Sokhiba Burkhanova away, together with her son, Takiuddin.

Tragically, Rakhimov was alone in the house in a different district which he was working on to earn money for the family. There had been recent signs of surveillance, meaning that the FSB were doubtless aware that Rakhimov would be there alone.

It is possible that the ‘operation’ was in revenge for the ECHR judgement and for the prohibition on Rakhimov being extradited.  There are absolutely no grounds for believing that Rakhimov was on any wanted list, as claimed, and the Court in Strasbourg had clearly accepted that he faced religious persecution in Uzbekistan, not prosecution for some crime or other.

The FSB’s claim that Rakhimov was “an armed terrorist” who started shooting at them and needed to be “eliminated” was, of course, pushed on Russian and Russian-controlled media, but dismissed by neighbours and all those who knew him as a devout Muslim and family man.  One acquaintance told Crimean Solidarity that the slain man would not himself carry weapons and told others not to do so.

It would be suicidal to try shooting with one pistol at a large contingent of armed men, carrying machine guns, even if you were on the run, and Rakhimov was not. The ECHR ban on Russia extraditing Rakhimov certainly applied also to illegally occupied Crimea where the family had been living peacefully and entirely openly for the last six years.

Russia’s brutality against Rakhimov and his family is unfortunately probably the norm in Chechnya and some other parts of the Russian Federation.  Sokhiba Burkhanova and her son only learned of Rakhimov’s death when the FSB turned up with a photo demanding that she formally recognize the dead man. They then not only made her a ‘witness’ in the appallingly cynical criminal charges against Rakhimov, concocted after they killed him, but also tried to organize her deportation. On 12 May the Russian-controlled Sovietsky District Court ordered that she be placed in a temporary holding centre before being deported to Uzbekistan.  This, thankfully, the European Court of Human Rights has now thwarted.

Lawyer Marina Dubrovina had earlier lodged an appeal with the Russian-controlled Crimean High Court regarding the decision to deport Burkhanova, with that hearing taken place on 28 May.  Despite the ECHR decision, the 'court' upheld the original order to deport Sokhiba Burkhanova.