Valentin Vyhivsky: "Either they free me, or I’ll return to my Homeland “by heavenly express” 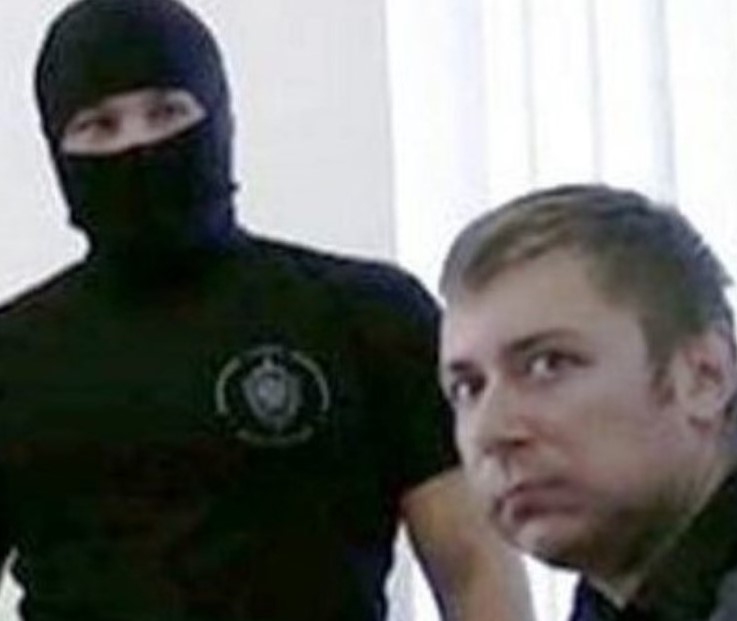 Almost seven years after Valentin Vyhivsky was abducted from occupied Crimea and imprisoned in Moscow, he has spoken openly of his despair in Russian captivity, and his certainty that he cannot endure another four years of imprisonment “in a concrete basement”.  The 37-year-old former Maidan activist has already been imprisoned in Russia for longer than his grandfather, a political prisoner during the Stalin regime.

If nothing changes, he is planning to begin a hunger strike, demanding the release of all Ukrainian political prisoners.  It is to be hoped that he does not, as Russia places no value on human life, but would, if it came to it, use force feeding.  It is clear, however, that Valentin has reached new depths of hopelessness and says himself that he has thought of committing suicide.  He asks Yekaterina Lushnikova to pass on to everybody, “that either they free me, or I’ll return to my Homeland “by heavenly express”.

Vyhivsky was abducted on 17 September and taken to Moscow where he was savagely tortured by the Russian FSB, and then held incommunicado for around eight months.  His appeal against an 11-year sentence on mystery ‘spying’ charges was rejected in March 2016, and since soon after that he has been in a harsh-regime prison colony in the Kirov oblast, almost two thousand kilometres from his now 12-year-old son and the rest of his family.  Almost all of that time has been spent in near total solitary confinement.

It seems likely that Russia is trying to keep him apart from other prisoners, however the official pretext is a string of supposed ‘infringements’ which supposedly makes him a ‘persistent offender’.  Luzhnikova was part of a civic monitoring group who are able to meet with prisoners, but only in the presence of prison staff.  The latter’s presence, she notes, did not worry Vyhivsky, who spoke without hesitation or fear about all that he had been forced to endure.   He has spent almost five years in punishment cells, he says, although a prisoner normally spends no more than six months.  They will always find some pretext or other, although he is convinced that this is not because of the prison administration itself, but due to an informal instruction from the FSB to keep him away from other prisoners.

This is not, he says, out of concern that there could be conflict between him and other prisoners because of his ‘spying’ conviction.  Prisoners do not, he says, determine their opinions about somebody on the basis of court sentences in Russia. “Everybody understands after all that the sentence may be unwarranted”.

Even during the ‘walk’ (probably in a courtyard) with other prisoners, he is prohibited from speaking with them, and can only do so if very quietly and secretively so that the guards don’t notice.  The problem is not only in his solitary confinement in terrible conditions (a cell, with a toilet behind a partition, in which he is not allowed to have any personal items), but the deprivation of family visits and even phone calls to his family.  According to Olga Romanova, from a civic organization helping political prisoners, he is entitled to one short visit, one parcel and one book parcel every six months.  She confirms that male prisoners are usually not imprisoned in such conditions for more than half a year.

Vyhivsky would be willing to work, he says, if they gave him something to do involving computers or similar, but refuses to do menial tasks, with demands that he do the latter also used as a pretext for keeping him in a punishment cell.

His parents sent him money so that he could buy things to supplement the extremely poor diet in the prison.  He has, however, asked them to stop doing this as the prison administration simply takes the money to pay fines for all these absurd ‘infringements’.

He is not subjected to any torture in the prison colony, although it is notorious for its “torture-like conditions”.  If they want to beat a prisoner up, Vyhivsky says, they send him to the head of the prison colony, Alexander Bibik.  Asked if he is afraid of being sent to him, Vyhivsky answers:

“I was tortured on Lubyanka [the FSB in Moscow], they even staged executions.  I’ve been through it all, and they won’t surprise me with this. I’ve been in a concrete basement for five years. I’m no longer afraid of anything and expect nothing from life. And I’ll tell you honestly, that I have suicidal thoughts.  I won’t sit here until 2025.”

The prison staff see prisoners as some kind of biomass, not as people.  “Every day they humiliate you, every day they try to convince you that you’re nobody here.  The Putin regime [i.e. regime under President Vladimir Putin] has inherited the traditions and methods of Stalin’s regime.”   It is no accident, he says, that in the neighbouring prison hospital No. 12, there is a portrait of Joseph Stalin on one of the walls.  His grandfather was a prisoner of the Gulag in the Kirov oblast after the War.  He had been one of the soldiers who liberated Berlin, yet was then treated as ‘an enemy of the people’ for having been on occupied territory.  His grandfather was in the Gulag for four years, until Stalin’s death.  His grandson is also imprisoned in the Kirov oblast, and “you can say that it’s in the same Gulag.”

Russia’s political trials of Ukrainians began almost immediately after its invasion and annexation of Crimea, with most of the victims, like Ukrainian filmmaker Oleg Sentsov and Crimean Tatar Mejlis leader Akhtem Chiygoz seized in Crimea.

Vyhivsky has been fascinated with aviation since childhood and is a graduate of the Electronics Faculty of the Kyiv Polytechnical Institute.  With a small son to take care of, he worked in Kyiv for a living in retail, while spending a great deal of his free time on the Internet chatting with other aviation enthusiasts, many of whom were in Russia. He had been active in Euromaidan and was therefore at risk in Crimea under Russian occupation, and he appears to have been tricked into going there by one of his Internet ‘friends’.  In September 2014, she asked Vyhivsky for help with money, supposedly for her grandfather’s cancer treatment.  He managed to raise the money and agreed to meet her in occupied Crimea because she said that as an employee of the Russian defence ministry, she could not visit Kyiv.  Vyhivsky became one of at least three Ukrainians to have been abducted after making similar arrangements, and it seems likely that the woman was cooperating with the FSB, possibly having been threatened with spying or treason charges if she didn’t.

He was sentenced on 15 December, 2015 to 11 years’ imprisonment.  Even after the eight months of total isolation and secrecy, Vyhivsky was only able to see the Ukrainian consul and mother and wife in the presence of two guards who immediately stopped them if they talked about anything but the most innocuous subjects. It was only after his mother’s visit in early 2018, when he was already serving the sentence, that she learned more about what he had originally called the “methods of persuasion” used – i.e. two mock executions in a forest; beatings and other torture methods used to extract his ‘confession’.