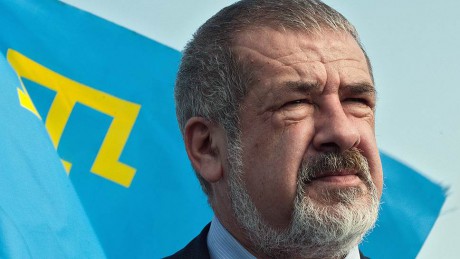 The Russian-controlled Crimean High Court ‘has sentenced’ Refat Chubarov, Head of the Mejlis (representative assembly) of the Crimean Tatar people to six years’ imprisonment and a 200 thousand rouble fine.  The ‘verdict’ and ‘sentence’ are both meaningless as Russia banished Chubarov from his homeland within months of its invasion, and the ‘trial’ was held in absentia.  They are also legally absurd, since Chubarov was tried under Russian legislation over a perfectly legal demonstration that took place on Ukrainian territory and under Ukrainian law.  The demonstration on 26 February 2014, however, foiled Moscow’s attempt to carry out a parliamentary coup in Crimea, rather than the invasion that has resulted in international condemnation and sanctions.  It is doubtless for this reason that Russia has since carried out reprisals against individual Crimean Tatar leaders, the Mejlis and against Crimean Tatars in general.  Its ‘prosecutions’ over the demonstration on 26 February have been overtly anti-Crimean Tatar, despite video footage demonstrating that much of the trouble that day was provoked by certain individuals from a smaller pro-Russian demonstration.  This is only one of several reasons why Russia’s stubborn determination to persecute the Mejlis and its leaders is providing incriminating evidence for the UN’s International Court of Justice, the International Criminal Court in the Hague and other judicial bodies.

Refat Chubarov is quite clear that the “Russian bandits” who seized and are occupying his land “are carrying out reprisals against the Crimean Tatar people – the indigenous people of the peninsula who in February – March 2014 openly and en masse spoke out in support for Ukraine’s territorial integrity.

Putin realizes that around 15 thousand Crimean Tatars, having gathered on 26 February 2014, in response to a call from the Mejlis of the Crimean Tatar people, at the Crimean parliament, prevented Russian agents from staging a supposedly voluntary unification of Crimea with Russia and forced Moscow to resort to a military seizure of power.”

He called the ‘sentence’ legally meaningless and stressed that those implicated in initiating and carrying out such ‘trials’ would eventually answer for their actions.

There were eventually two charges: Article 280.1 § 2 of Russia’s criminal code, on so-called ‘public calls to carry out action aimed at violating Russia’s territorial integrity’.  That charge against Chubarov was first announced in October 2015, with Russia then claiming, some 14 months after it had banned Chubarov from Crimea, that they would be “demanding his extradition.”  This was grotesque sabre-rattling, since Chubarov’s position, that Russia is an aggressor state, illegally occupying Ukrainian territory, is shared by all international bodies and democratic countries.  The second charge was the remake of the trial of Chiygoz, with Chubarov charged under Article 212, with ‘organizing a mass riot’.

There was no mass riot on 26 February 2014. The Mejlis had informed the authorities of the planned demonstration which, unlike in Russia, is all that is required in Ukraine.  It is unclear whether the Russian Unity party which organized a much smaller counter-demonstration, also notified the authorities, but that is of no interest to Moscow who had Russian soldiers with machine guns install the party’s leader Sergei Aksyonov in power. The demonstration in support of Ukrainian unity was held to block the planned attempt by certain pro-Russian politicians (almost certainly with FSB help) to push through a ‘resolution’ in parliament on changing Crimea’s status.  This would still have been illegal, but would have been unlikely to arouse major international reaction, as did the invasion the following morning.

The two deaths during the demonstration on 26 February were in the area where pro-Russian demonstrators were gathered, and one person died of a heart attack.  Back in December 2015, the husband of the other person who died,  Valentina Korneva, was reported to have stated that he did not think any of the Crimean Tatars then charged were to blame and to have mentioned two pro-Russian thugs.  It is almost certainly because of the impossibility of blaming Crimean Tatars that during the earlier trials, those deaths were constantly mentioned, but no charges were ever brought.

The eight-year sentence passed on Akhtem Chiygoz in September 2017 was condemned by the entire international community, as was the later sentence passed on another Mejlis leader Ilmi Umerov.  Both men were unexpectedly released into exile on 25 October 2017, following a deal which appears to have involved their exchange  for two Russian killers who had carried out a political killing in Turkey and been caught.

Having rejected Chubarov’s offer to testify at Chiygoz’s trial, Russia then decided in March 2020 to bring the same lawless charges against Chubarov.

Osekin has said that he will be lodging an appeal against the ruling, although this, and all approaches to Russian courts, are almost certainly aimed at exhausting all legal remedies before turning to the European Court of Human Rights.