Terrorism charges in Russia – for a social media repost and for supporting Ukraine Russian defender of Ukraine and the Kremlin’s Ukrainian hostages jailed on charges of ’justifying terrorism’Darya Polyudova gets 2 years for criticising Putin and war in UkraineRussian ’federalization march’ activist jailed for critical social network postsMoscow congress defends separatists worldwide, only not in Russia3-year sentence for criticizing Putin and Russia’s annexation of Crimea5 years imprisonment for criticizing Crimean annexation and Putin?Poet labelled ‘terrorist’, flung off Wikipedia for verse in support of UkraineRussian teacher on trial for poem against annexation of CrimeaKaliningrad ’flag prisoners’ charged with insulting the veterans Moscow rejects7 years for raising flag in protest at Russian invasion of CrimeaKaliningrad FSB finds ‘deep offence’ in a German flagRussia, the improbable human rights crusaderPutin’s selective terrorismPro-Russian thugs beat up Ukrainian unity demonstrators – except on Russian TVArmed men cut off Ukrainian channels in DonbasDonetsk television station seized to provide "correct" - Russian - coverageMoscow’s “Voice of the People” in SlovyanskMurdered in SlovyanskUS journalist released, others still held hostage in Slovyansk
• Topics / News from the CIS countries 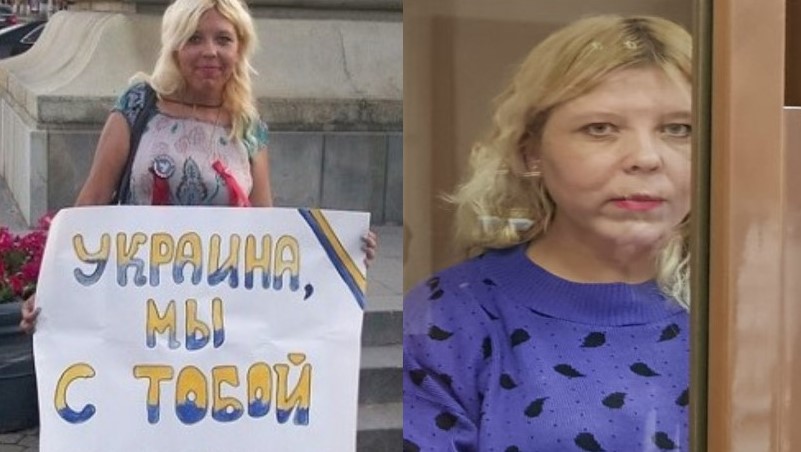 Darya Polyudova in 2014 with a placard reading Ukraine, we are with you, in court in 2021 (second photo from Grani.ru)

A Russian military court has convicted Darya Polyudova of ‘justifying terrorism’ over a reposted photo and text on the social network VKontakte and of ‘public calls to extremism’ over another social media post.  On 31 May, the Western District Military Court in Moscow sentenced the 32-year-old activist to six years’ imprisonment in a medium security prison colony, and also imposed a four-year ban on Polyudova working in the media; organizing mass events or posting information on the Internet.

It is near certain that Polyudova and her lawyer, Leonid Solovyov, will lodge an appeal, however confidence is limited since this is very clearly a politically motivated prosecution, and the young woman has already been in detention for well over a year.  Polyudova is the leader of an organization called ‘Left Resistance’, but is best known to Ukrainians because of her unwavering opposition to Russia’s aggression against Ukraine and for her defence of Crimean Tatar and other Ukrainian political prisoners held in occupied Crimea or Russia.  She paid for this with an earlier 2-year prison sentence, and now faces a much longer term of imprisonment for activities that in any democratic country fall under the scope of freedom of expression and of peaceful assembly.  In both cases, she has been recognized as a political prisoner by the authoritative Memorial Human Rights Centre.

The sentence this time could, in fact, have been worse since Polyudova was charged under Russia’s notorious ‘terrorism’ legislation, with the prosecutor having demanded a 7-year sentence.  One of the ‘episodes’ was, however, requalified from ‘public justification of terrorism’ (Article 205.5 § 1 of Russia’s criminal code) to ‘public calls to extremist activities’ (Article 280 § 1).  Russia’s legislation on so-called ‘extremism’ is no less notoriously vague and open to abuse, but the penalties are not as bad.  The charge that was requalified was over a telephone video about Yevgeny Manyurov, the Russia who, on 19 December 2019, fatally shot two FSB officers at Lubyanka, before being shot dead himself.

In all the harassment and persecution involving Polyudova since 2014, Russia has chosen to view as ‘terrorism’ on Russian territory activities that it actively promoted in Ukraine.  In January 2019, Polyudova held a single-person picket in Moscow under a banner reading: “Kuril Islanders: Stop feeding Moscow! Long live the Far Eastern Republic!”.  She suggested that the island inhabitants hold a referendum on withdrawing from the Russian Federation. After Russian soldiers without insignia seized control of Crimea, it was a so-called ‘referendum’ that Moscow itself staged to try to justify its annexation of Ukrainian territory.  On her VKontakte page, Polyudova wrote that it would be good for Russia if it split up into several countries.

The prosecution had claimed that, merely by reposting this, Polyudova was justifying terrorism and saying that it should be emulated.

In declaring Polyudova a political prisoner, the authoritative Memorial Human Rights Centre pointed out that she had not urged the people of the Kuril Islands to take up arms, and had merely called for a referendum, a call which is in no way criminal. It was far-fetched, Memorial HRC wrote, to accuse somebody of justifying terrorism merely because they reposted somebody else’s text.

Memorial also noted the evident absurdity of Polyudova’s detention and trial over social media posts that had around 60 viewings, with this number including the FSB and Memorial.   Darya Polyudova’s prosecution, the human rights group concluded, was politically motivated, and linked with her social and political activism.

This was officially on the basis of two VKontakte posts and a single-person picket, however Polyudova’s troubles really began in August 2014, when she and a few other friends tried to hold a march in favour of greater, although still extremely limited, federalization for Kuban.  Moscow, which was (and still is) demanding ‘special status’ for so-called ‘separatists’ in Ukraine, as well as wide-reaching Ukrainian ‘federalization’, came down very hard on Polyudova and the two friends who were seeking a very modest level of autonomy for regions within the Russian Federation.  Polyudova ended up imprisoned, while the other two eventually fled the country fearing that they would be next.

Polyudova was arrested on 15 August 2014, two days before the banned march was supposed to have taken place.  She had been approached by an obvious provocateur, then jailed for 14 days for what the court decided to consider ‘petty hooliganism’.  She was never released even though criminal proceedings were only initiated on 15 September 2014 for alleged public calls to actions aimed at violating Russia’s territorial integrity (Article 280.1).   She was then convicted of supposed ‘calls to separatism or extremism’, over a banner she held up during a single-person picket on April 4, 2014.  This read “No war against Ukraine, but revolution in Russia! No war, but revolution”!  She had circulated a photo of herself with the banner on VKontakte.  .

The second ‘episode’ was claimed to fall under Article 280 § 2 (public calls to extremism via the Internet).  She had reposted somebody else’s post containing the phrases “Wake up, people! Why can we not get rid of Putin and then make a socialist revolution?!!! Enough sleeping! It’s time to go out onto the square and overthrow this regime””.

Polyudova was released in October 2017.  Before her arrest and detention in January 2019, she faced several administrative prosecutions, as, essentially, do all Russians who try to exercise the rights theoretically enshrined in Russia’s Constitution.  She had refused to be cowered into keeping her head low, and had regularly come out on supposedly legal single-person pickets, very often in support of the Kremlin’s Ukrainian hostages.

Dasha Polyudova now needs our support.  If you can, please write to her!   The letters need to be in Russian and on ‘safe’ subjects, as they will pass a prison censor (i.e. writing about Ukraine is fine, but references to Russian aggression will at very least mean that the letter does not reach her!)  If Russian is a problem, the following (copied by hand) would be fine, though maybe add a photo, picture, etc.

The address (until the appeal)