Abducted journalist’s life is in danger in Belarus. Not only his while Lukashenko and Putin get away with terrorismBelarus KGB arrest journalist who identified the Ukrainian Berkut helping Lukashenka regime Russia and Belarus boast collaboration on joint hit operations against their ‘enemies’ Ukraine protests after Russian-controlled Luhansk militants join Belarus KGB in torturing Protasevich ‘International institutions must protect Ukrainians from abductions and executions’, Ukrainian SCOsRussia has already greatly surpassed the Nazi Third Reich by insidiously launching missile and bomb attacks on UkraineRussia kills Minsk Agreement, with lives of over 300 Ukrainian hostages and POWs in danger Staged Donbas ‘evacuation’ and fake sabotage in Russia’s war against Ukraine. Where are the sanctions?Donbas ‘conscripts’ into Russia’s army could be deployed to fight Ukrainians Court in Russia inadvertently reveals the huge number of Russian military forces deployed in Donbas Key Donbas militant asserts that Russia killed ‘Donetsk republic’ leader appointed by Putin aideStudy confirms that Russia is pouring military equipment and arms to Donbas militants Donbas insurgent admits he bombed Ukrainian city while Russia blames Ukraine Ukrainians tortured and imprisoned in Donbas for supporting Ukraine, with Russia blocking their release Ex-Berkut officer on trial for Maidan killings reinstated in Ukraine’s police forceA brief description of the KHPG strategic litigations in the first half of 2021Czech Republic passes record 21-year sentence for terrorism in militant-controlled Ukraine Prisoners’ rights to health protection and medical care in 2014-2021: KHPG reportDonetsk children taught to glorify Russian Donbas mercenary likely killed on Kremlin orders Fake ‘Ukrainian fascist’ arrested and charged with working for Russia and its proxy Luhansk ‘republic’
• Topics / Terrorism 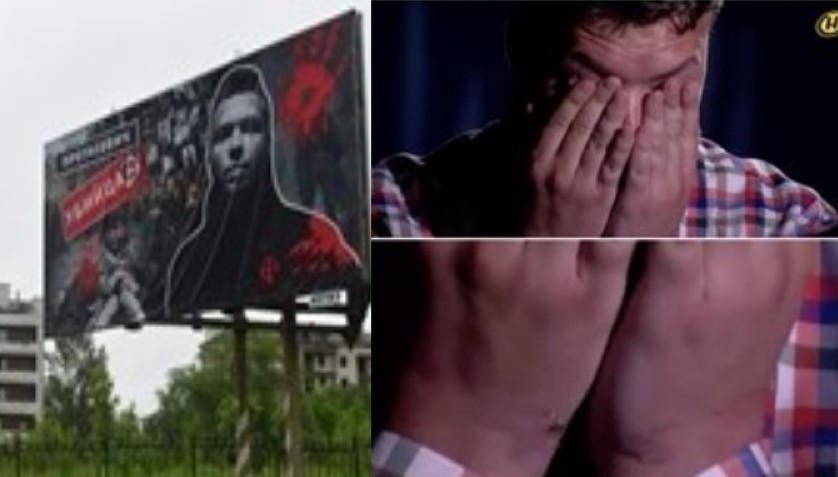 Billboard in ’LPR’ showing journalist Roman Protasevich and claiming him to be a ’murderer’, Protasevich on Belarusian state TV, with torture marks visible on his hands

The self-proclaimed ‘Luhansk people’s republic’ [LPR] has announced plans for tough measures, even the death penalty, for what are described as “crimes against peace and the security of humanity”.  The move comes amid attempts by the Russian-controlled ‘LPR’, Russian and Belarusian state-controlled media to link abducted Belarusian journalist and opposition activist Roman Protasevich with the war in eastern Ukraine, and to claim he is a ‘murderer’.  Belarusian dictator Aleksander Lukashenko’s invitation to LPR militants to come and ‘interrogate’ Protasevich seems especially cynical given the methods which the Belarusian KGB is clearly using to extract ‘confessions’ and ‘apologies’ from the young journalist on state-controlled propaganda channels.  It should be said that both Russia’s FSB and the militants in occupied Donbas regularly produce similar videoed ‘confessions’ from Ukrainian hostages or political prisoners, and we have ample testimony from victims about the electric shocks, beatings, mock executions and other forms of torture used to obtain them.

On 2 June, the so-called ‘LPR prosecutor general’ posted “an appeal” to LPR leader Leonid Pasechkin and supposed members of the ‘LPR parliament’ to consider increasing punishments for such alleged “crimes against peace and the security of humanity”.   This ‘prosecutor’ asserts that “in initiating criminal proceedings over cases of the use of prohibited means and methods of waging war, as well as of genocide, shocking facts have been established about the inhuman behaviour of Ukrainian punitive forces («каратели») – participants of so-called volunteer battalions and Ukrainian Armed Forces soldiers”.

While part of a concentrated attack on Protasevich, this is also a common refrain from both Russia and its proxy ‘republics’ regarding the war which Russia brought to Donbas. There are certainly prohibited methods of war; crimes against humanity and war crimes that cannot be subject to any sanctions.  Here, however, an illegal military formation, armed and controlled by Russia, has arbitrarily labelled some kinds of behaviour ‘crimes against peace and the security of humanity”.  These are not internationally recognized terms, and the militants, or their Russian fixers, will undoubtedly decide which Ukrainian soldiers defending their country are supposed to have committed them.  Some of the rhetoric is disturbingly reminiscent of 2014, when the militants themselves, the Russian authorities and Russian state media were widely using footage from different countries and times, actors and ‘confessions’ tortured out of hostages for claims that Ukraine was committing ‘genocide of the Russian-speaking population’ of Donbas.

In December 2020, the Prosecutor of the International Criminal Court [ICC], Fatou Bensouda stated that she had found reasonable grounds for believing that war crimes and crimes against humanity had been committed “in the context of the situation in Ukraine”.  Human rights groups had helped provide ICC with detailed information about extrajudicial killings, torture in secret prisons in Donbas; evidence of civilian targets in Donbas having been shelled from Russian territory; and much more.

While the militants prevent international observers, OSCE monitors, etc. from seeing hostages, inspecting sites, etc., Ukraine back in September 2015 issued the second of two ad hoc declarations recognizing the full jurisdiction of the Court in identifying and prosecuting all those responsible for crimes, regardless of nationality or affiliation, from the beginning of the conflict to the present day.  This is hugely important, not least because it raises the chances that Moscow and those in Russia implicated in war crimes and crimes against humanity can be held to account.

Worth noting, that in its Freedom in the World 2021 report, Freedom House ranked Eastern Donbas (i.e. the area of the so-called ‘Luhansk and Donetsk people’s republics’) as ‘Not Free’ and only one notch above North Korea, at 4/10.  This was while government-controlled Ukraine was ‘Partly Free’ with a score of 60/100 (summary here)

The Luhansk militants hit international headlines back in 2014 for their ‘death sentences by a show of hands’ and both Donbas ‘republics’ are known to have at least passed several death sentences since then.  The ‘appeal’ on 2 June 2021 was very clearly about propaganda, rather than a policy move, with the main question being who instigated it.

Since Belarus hijacked a Ryanair plane headed for Lithuania on 23 May, in order to abduct Belarusian refugee and opposition activist Roman Protastevich and his Russian girlfriend, Russia and Belarus, helped by a notoriously pro-Russian Ukrainian blogger Anatoly Shariy, have been actively pushing the claim that Protasevich fought in Donbas as part of the Azov Battalion.  The ‘reports’ vary mainly in whether they claim Azov to be ‘neo-Nazi’, or to be a ‘terrorist organization’.  In fact, however negatively we may view the political views of Azov’s founders, it began as a volunteer battalion defending Ukrainian territory against militants, heavily manned and armed from Russia, and later was incorporated within the Ukrainian National Guard.  Its former commander Andriy Biletsky has denied that Protasevich was involved in any fighting and says that he was present in Donbas carrying out journalist duties.

‘LPR’ certainly appear to be fulfilling their part in a concentrated Russian and Belarusian attack on Protasevich.  The Russian state-funded RIA Novosti reported the ‘LPR prosecutor’s appeal’ showing a huge billboard with Protasevich’s photo on it and the word “murderer”.    It goes on to state that on 27 May, the so-called ‘LPR prosecutor general’ initiated “criminal proceedings against Protasevich, who was detained in Belarus, and announced their readiness to provide the Belarusian enforcement bodies with information and legal assistance in investigating his case”.  It claims that Protasevich faces 20 years’ imprisonment or even life imprisonment in the so-called ‘LPR’.

On 1 June, both Russian and Belarusian state media reported Lukashenko’s invitation to ‘LPR’ to come to Minsk to ‘question Protasevich’.

It should be stressed that in its reporting, Russian state media conceal the fact that Belarus committed an act of air piracy, forcing down a plane that was much closer to its destination (Vilnius), claiming a report of a bomb on board.

Russia is also following Belarusian state propaganda in uncritical reporting of supposed ‘confessions’ and expressions of support for Lukashenko which Protasevich has evidently given under torture.  Russia’s proxy Donbas ‘republics’ have followed Russia’s FSB in regularly showing videoed ‘confessions’ of people who are clearly speaking under duress.  Lukashenko’s invitation to ‘LPR investigators’ was essentially an invitation to join in Protasevich’s torture.

Western countries were rightly unanimous on 23 May in condemning Belarus and promising severe measures over the state hijacking of the plane.  They are, however, failing to respond to Russia’s effective complicity, both on the propaganda front, and through its refusal to allow planes, who are bypassing Belarusian airspace, to land in Moscow.  This is despite the fact that even NATO representatives have acknowledged that Lukashenko would not have committed this crime without, at very least, the go-ahead from Moscow.  Such silence sends a message to Russia that spells danger for all of us.