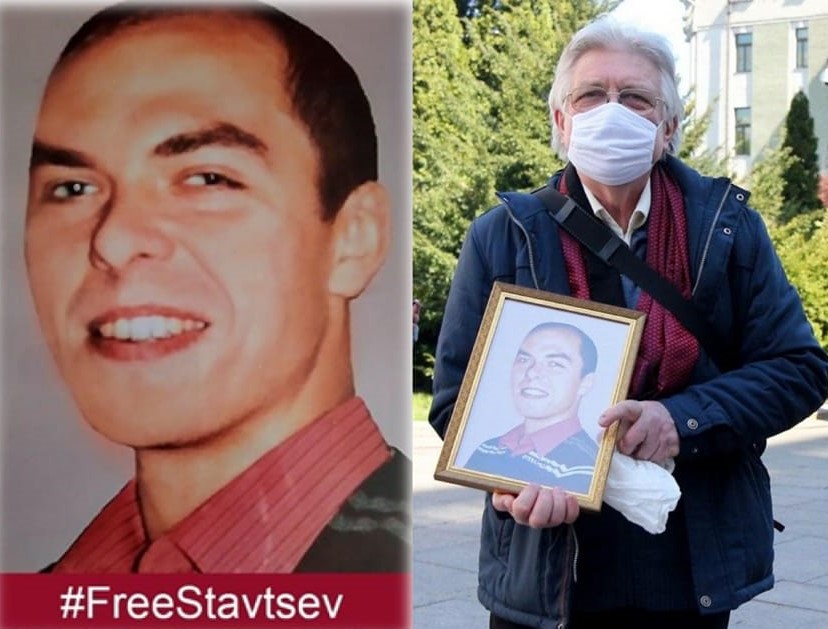 Yevhen Stavtsev turned 35 on 2 June, a prisoner of the self-proclaimed and Russian-controlled ‘Donetsk people’s republic’ [DPR].  He has been a hostage now for almost four years, despite three exchanges of prisoners during that time.  We will only learn why Stavtsev was targeted when he is finally released, however it is possible to say with certainty that he was tortured since at least one former hostage, journalist Stanislav Aseyev has confirmed that he was with Stavtsev in the notorious ‘Izolyatsia’ secret prison in Donetsk.  This is referred to as a concentration camp by former hostages, both men and women, and they give harrowing accounts of the torture methods used – both to extract ‘confessions’, and as ‘entertainment’ for sadists.

Stavstev was seized by the so-called ‘DPR ministry of state security’ at his home, late in the evening of 6 October 2017.  For almost two months his parents knew nothing about his whereabouts.  His father, Yury Stavtsev, is a doctor (a gastroenterologist) who left occupied Donetsk in 2015 and would almost certainly have been taken prisoner himself if he returned.  His wife, who is in poor health, tried everything to learn where her son was, and was finally told by the ‘DPR militants’ that Stavtsev was ‘under arrest and criminal investigation’, with no further information.

Then, on 18 February, 2019, there was one of the ‘DPR’’s blitzkrieg ‘trials’.  This seems to have lasted a day, with Stavtsev’s mother not allowed to be present, and resulted in a 14-year ‘sentence’.  Stavtsev is supposed to have ‘spied for Ukraine and created a terrorist organization’.

In an interview in 2020, Yury Stavtsev described the total shock of that evening in October 2017 when armed men burst into the flat where his son and wife were living. He drily rejects the absurd attempts made by Russia’s President Vladimir Putin and Russia’s representative at the International Court of Justice to claim that the militants were ordinary Ukrainian miners who ‘found’ machine guns and mortars in closed mines.  The heavily armed individuals who burst into their home and, without any explanation, took his son away, together with computer technology and documents, had thick red beards (and, it is clear, were evidently not locals). During the interview, he points to other evident lies, such as the ‘DPR’ propaganda claims that Ukrainian fighters were shelling civilians, when in fact you could see that the Grad missiles were being fired from within the already militant-occupied city.  He also says that he saw Russian chevrons on the occupiers’ clothes, and air strikes on Donetsk Airport which Ukrainian ‘Cyborgs’ were defending until late January 2015.

Yury Stavtsev explains that his son, who was 32 when seized, was born in Donetsk and studied there, graduating in international economics.  He had worked in the Pension Fund, but later began his own business, and was planning to wind this up, take his mother and join his father in Kyiv.  He stood aloof from politics and had not taken part in Euromaidan, nor had he ever taken up arms.  “That is, there seemed nothing that could have compromised him before the occupation regime”.

He asks himself what could have happened, and wonders if somebody ‘denounced’ his son – just like in 1937, the worst year of Stalin’s Terror.

From the little that they have been able to glean, they know that their son has been through “more than one of the rings of hell”.  “He endured torture, was at ‘Izolyatsia’, then in Colony No. 97 in Makiyka, now he’s in No. 32, also in Makiyivka”.

When you’re already in your 60s, Yury Stavsev says, you hope that your sons will help you.  Instead, he is tirelessly campaigning to secure his son’s release, in the next exchange of prisoners.  When this will be, however, is quite unclear.

Yevhen Stavtsev is one of at least 250 hostages and prisoners of war held by militants of the so-called ‘Donetsk and Luhansk people’s republics’.