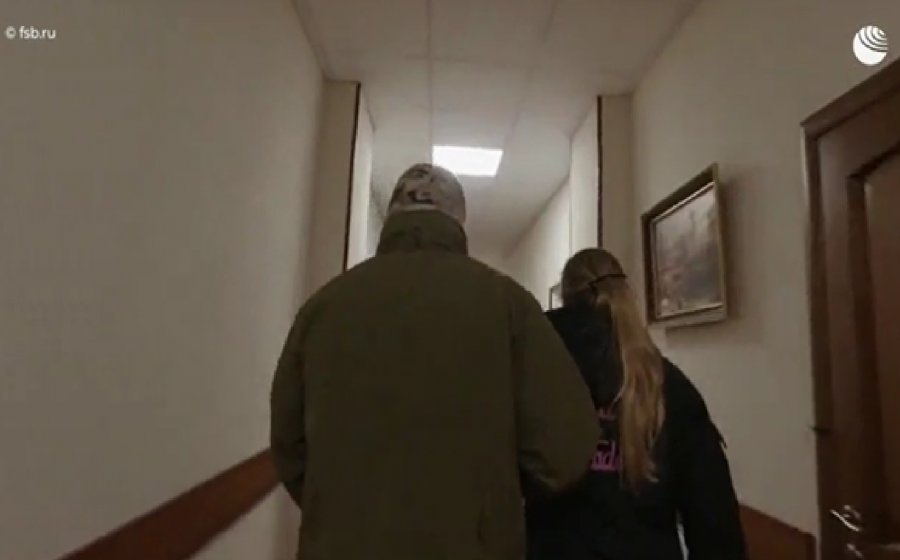 Tatyana Kuzmenko has been sentenced by a Russian court to eight years’ imprisonment on mystery ‘treason’ charges just over a year after she and Kostiantyn Shyrinh, her Ukrainian common-law husband (or ex-husband) were arrested, and accused of involvement in a ‘Ukrainian ‘reconnaissance and sabotage’ group.

The ‘trial’ at the Southern District Military Court in Rostov was held under special procedure and behind closed doors, with the secrecy supposedly because of material classified as top secret.  RBC notes that ‘special procedure’ is normally applied where a person is not disputing the charges. It seems that the prosecutor asked for 12 years’ imprisonment, but the court handed down 8 years, with a deferment of two years until her daughter turns 14.

There is no information at present about the father of Kuzmenko’s daughter, Kostiantyn Shyrinh, who was arrested at the same time and, reportedly, taken to Lefortovo Prison, in Moscow.

The FSB and Russia reports on 15 April 2020 did not name Kuzmenko, calling her only a Russian military servicewoman from Feodosia.  She was arrested on 24 March 2020 and charged with ‘state treason’ (Article 275 of Russia’s criminal code).  The reports then said that she had ‘admitted guilt’, saying that a Ukrainian citizen, her former husband, had recruited her several years after they parted and that she had passed him documents of the military unit in which she worked.  Due to her underage child, she was placed under house arrest.

One of the purposes of these arrests is their use on Russian state-controlled media and on this occasion, back on 15 April 2020, RIA Novosti came out with the headline ‘Ukrainian saboteurs planning terrorist acts detained in Crimea’. The report cited the FSB as claiming to  have “broken up activities of the Ukrainian Defence Ministry’s Military Intelligence Department aimed at organizing and carrying out acts of sabotage – terrorism, stealing information containing state secrets and recruiting Russian citizens”.  These alleged ‘activities’ had purportedly been organized by Lieutenant Oleh Alisherovych Akhmedov, the head of a department of military intelligence located in Kherson.  Two ‘agents’ were mentioned – a Russian military servicewoman and a male Ukrainian citizen.  The FSB asserted that information about the activities of the woman and Shyrinh was received as part of ‘an investigation’ linked with the prosecution of another Ukrainian, Denis Kashuk.  He was sentenced on 6 April 2020 to 3 years and 8 months’ imprisonment by ‘judge’ Larisa Likhacheva from the Armyansk District Court on charges of possession of ammunition and explosive substances and of smuggling explosives. He had almost certainly provided any ‘testimony’ – against himself or others – under physical and / or psychological duress.

There are conflicting reports about whether Kuzmenko and Shyrinh were living together at the time of their arrest.  In May 2020, the Russian newspaper Kommersant reported that 60-year-old Shyrinh denied the charges of ‘spying’ against him and asserted that his military servicewoman partner had given false testimony against him.  She was accused of having, in 2017-2018, gathered information about weapons and the number of members of her missile regiment in Feodosia.

The good news is that Shyrinh has a lawyer, Oleg Hlushko, who had unsuccessfully appealed against his detention and who told Kommersant that the investigators had not provided any evidence that his client was involved in spying.  The FSB very often blocks access to detainees, until they have ‘agreed’ to plead guilty.  This does not necessarily change the eventual sentence,  but does make it harder for the Russian authorities to totally conceal information about the person.

According to his lawyer, Shyynha  is from Kyiv and came to Crimea from Zaporizhya in 2015.  In Feodosia, he met his future partner who is considerably younger than him and who was working in a military unit.  They had lived together, in rented accommodation from then, and have a young daughter.  In fact, this would suggest that the daughter is considerably younger than the sentence just passed against her mother would suggest, so it is possible that he is not the child’s father.

The investigators reportedly asserted that Shyynha had persuaded his partner to provide secret information about her unit.  Kommersant says that, according to its information, this is the 18th Sevastopol – Feodosia Guards Rocket Regiment  which is part of the 31st Russian Air Defence Division.  This was formed after Russia’s invasion and annexation of Crimea and is armed, among other weapons, with S-400 missile systems.

Even without problems arising from the sheer secrecy around this case, it is clear that there are suspicious discrepancies.  The original reports cited the FSB in claiming that they had uncovered a group of ‘saboteurs’, planning terrorist attacks, with the video circulated showing an electricity pylon as well as a supposed hiding place containing explosives. This is clearly not the case, with Kuzmenko, as a Russian citizen, having been convicted of ‘treason’, and Shyryna accused of ‘spying’.  There is also concern that the only ‘evidence’ reported comes from ‘confessions’ given by two people seized by the FSB – Kuzmenko and Kashuk.  In Kashuk’s case, we know that he agreed to plead guilty out of fears for his family’s safety, as well, in all likelihood, as under torture (details here).