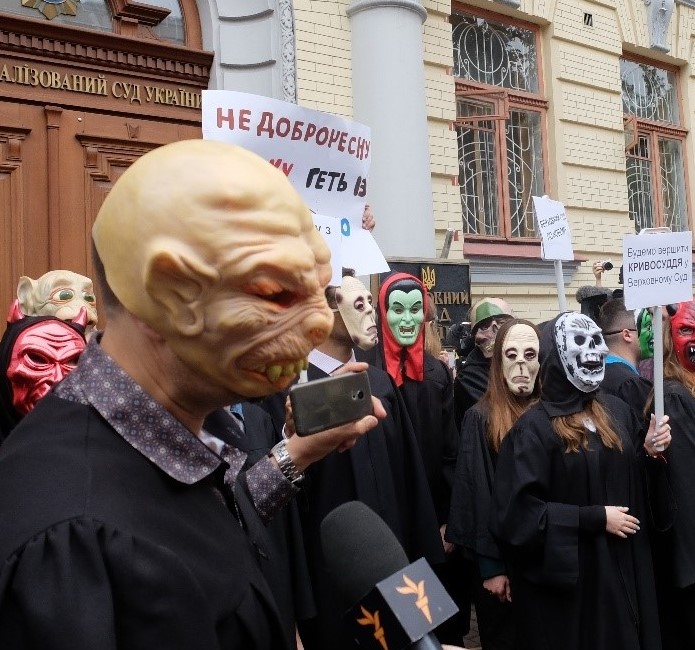 Gianni Buquicchio, President of the Council of Europe’s Venice Commission, has slammed a draft bill now awaiting its second reading in Ukraine’s Verkhovna Rada.  During the ‘Democracy in Action’ conference now underway in Kyiv, he said that the bill would destroy judicial reform in Ukraine if passed.  Mr Buquicchio also met with Ukraine’s President Volodymyr Zelensky on 8 June, and hopefully spelled this out in greater detail.  The Venice Commission’s concerns about Draft Law No. 3711-d are shared by a number of prominent Ukrainian NGOs who have said that adoption of the bill would spell catastrophe for judicial reform.

Draft Law No. 3711-d was first tabled on 29 January 2021 and passed in its first reading on 3 March.  It is the version now awaiting a second and final, reading is the one which the President of the Venice Commission says does not meet the recommendations which its legal experts have given.  He stressed that judicial self-government bodies urgently need an overhaul, but that this cannot be achieved by relying on the old structures which have totally discredited themselves.

With respect to the urgent task of reforming the High Qualification Commission of Judges [HQCJ], he said that the Venice Commission supports the proposal to create a mixed national and international selection panel for choosing new members of HQCJ.  He believes that this selection panel could be created according to the model which proved successful in the creation of the High Anti-Corruption Court.

“The makeup of the High Council of Justice must be reviewed before this body is entrusted with appointed HQCJ.  This is an absolute condition without which judicial reform is doomed”.

The comments from the Venice Commission President came shortly after a Statement was issued, in both Ukrainian and English, by the DEJURE Foundation and Anti-Corruption Action Campaign, describing the same bill “catastrophic” for judicial reform in Ukraine and calling on the Verkhovna Rada to not pass it in its present form.

The bill as it now stands would mean that it was the *unreformed and corrupt” High Council of Justice [HCJ] that would ultimately decide who would join HQCJ, with the role of international experts in this entirely eliminated. “This contradicts both the recommendations of the Venice Commission and Ukraine's agreements with international partners - the EU and the US. It also puts at risk funding from the IMF.”

This would, the NGOs warn, mean that the selection of around 2,000 judges and integrity checks on an equivalent number of judges throughout Ukraine being in the hands of a body which itself urgently needs reform and which, they assert, is controlled by Pavlo Vovk, the notorious head of Ukraine’s most corruption-ridden court, the District Administrative Court in Kyiv (OACK).

Back in July 2019, Ukraine’s National Anti-Corruption Bureau [NABU] made public intercepted conversations between Vovk and other judges.  These very clearly pointed to their involvement in dodgy court rulings organized to ensure the removal of certain members of HQCJ, and appointment of others.  HQCJ has a critical role to play in ensuring (or blocking) judicial reform, particularly through the qualification assessments that it makes of judges. Its makeup was of direct interest to Vovk who had received a negative assessment from the Public Integrity Council which could only be ignored with the support of a two-thirds majority of the members of HQCJ.

It might have been expected that these intercepted conversations would put an end to Vovk’s position within OACK.  It did not, and in July 2020, NABU revealed new recordings.  They accused Vovk, his deputy Yevhen Ablov, several other OACK judges, as well as Zenoviy Kholodniuk, the head of the State Judicial Administration, of involvement in a criminal organization aimed at seizing state power by establishing control over the High Qualification Commission of Judges and the High Council of Justice, and by creating artificial obstructions to their work.

All of this resulted in over 26 thousand Ukrainians signing a petition in the second half of 2020, demanding dissolution of OACK.  In April this year, Ukraine’s President Volodymyr Zelensky put forward draft bills formally aimed at dissolving the court, however DEJURE and other NGOs warned then that OACK could end up dissolved in name alone, with Vovk simply moving to the renamed version of the old, discredited court (details here).

The situation with No. 3711-d is not much different, with apparent reforms so flawed, that Vovk would retain his influence, via a totally unreformed High Council of Justice.  The NGOs believe that the problem can be resolved if MPs support two amendments:

“Amendment № 451 stipulates that the final composition of HQCJ will be determined by a Selection Commission, and not by the unreformed High Council of Justice. This will make it possible to ensure an HQCJ with independence and integrity, that can in turn select 2,000 judges with integrity.

Amendment № 453 stipulates that independent international experts will have a casting vote on selection of the HQCJ members.  Like the Venice Commission President, they note that this mechanism worked well when selecting judges to the  High Anti-Corruption Court.

These amendments, the NGOs say, will mean that Ukraine has a chance of achieving real judicial reform.   Failure to support them and adoption of the draft bill in its present form will lead to the total collapse of the judicial reform which President Zelensky initiated.