Intercepted phone calls incriminate MH17 defendants and show extent of Russia"s control over war in UkraineImportant move by ECHR merges Dutch case against Russia over MH17 with Ukraine’s case over aggression in DonbasHague Court rejects Russian MH17 defendant’s attempt to endlessly investigate ‘alternative versions’Russia accuses Netherlands of hostile actions in seeking justice for MH17 victimsMH17 and the weapons of death that Russia is still bringing to UkraineMH17 witness reports Russian military personnel were at Buk missile launch site298 Empty Chairs: Victims’ families demand Russia admit liability on eve of MH17 trialMoscow attempts to get trial of key Russian MH17 suspects moved to RussiaDutch Prosecutor accuses Russia of deliberately hiding important MH17 suspectIntercepted calls prove Russian government control of militants in Ukraine on eve of MH17Russia hides MH17 suspect, then uses him for lies about the disaster and about ‘civil war’ in UkraineHow can Russia deny responsibility for MH17 when it gave up Sentsov, others to get key witness out of Ukraine?MH17 suspect release incriminates Russia, but leaves Ukraine compromisedFamilies of MH17 victims call for honesty and justice from Russia as the lies continueThree out of four MH17 suspects are ‘former’ Russian FSB or military intelligence officersRussian Twitter ‘false flag’ operation to blame Ukraine for MH17 broke all recordsEuropean Court of Human Rights demands answers from Russia over downing of MH17 over UkraineNext step the Hague after Russian military source named for Buk missile that downed MH17Russian TV produces ‘witness’ of Ukraine downing MH17, then quickly removes reportRussian media twist Bellingcat study to find Ukrainian Buk in Donbas before MH17
• Topics / Terrorism 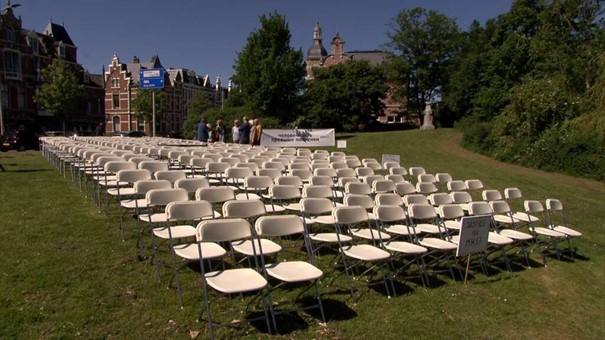 On 8 June, during the second day of substantive hearings in the trial over the downing of  Malaysian airliner MH17 in 2014,, the court vital testimony, including from two witnesses who were near the site in militant-controlled Donbas from where the Russian BUK surface-to-air missile was launched. A number of witnesses also confirmed  knowing about the presence of the BUK missile luancher in the area.

The first hearing on 7 June was essentially about setting out the plan for the hearings, while on 8 June, the court heard huge amounts of detail about the damage to the plane, the metal fragments from the exploding missile, including those found in the bodies of the pilots.  Some of the information is distressing even for onlookers, and must have been hellish for the many relatives of the victims who are attending the hearings.

It was essentially known, or at least strongly suspected, from the outset that the plane had been downed by a BUK missile, and that this had been brought to occupied Donbas from Russia.  The comprehensive analysis of all evidence was, however, required since Russia has denied any involvement and has tried to present an endless number of ‘alternative versions’.

While “the main scenario”, according to presiding judge Hendrik Steenhuis is that the plane was downed by a BUK missile operated by the pro-Russian militants (called ‘separatists’ during this trial), possible other explanations for the disaster – something wrong with the plane; an explosion in the plane; another kind of missile -  were discussed on 8 June.  So too were the reasons why these had been rejected, including the lack of any indication of a problem on the black box, where and what the damage to the plane constituted; the fragments in the bodies of the cockpit crew, etc.

There was enough material evidence back in May 2018 for the Joint Investigation Team that the BUK missile which downed MH17 on 17 July 2014 came from the 53rd Anti-Aircraft Missile brigade, a unit of the Russian army from Kursk in the Russian Federation.  JIT had already stated back in September 2016 that the fatal BUK missile had come from Russia, but this was the first time that it clearly linked the missile launcher’s source with the Russian Armed Forces.  It said that the combination of features it had studied to reach its conclusion are “so special that that can be considered as a fingerprint”.

It became very clear back in November 2019 that the prosecution had already gathered considerable witness testimony and that it was not stopping there.  The explosive new evidence revealed from both witnesses and intercepted calls was presented as “” and went on to say that “JIT is looking for information on the individuals within the military and administrative hierarchy who enabled the shooting down of MH17 in Eastern Ukraine using a BUK TELAR. The JIT wants to get in touch with further witnesses who are able to testify about these command lines and the role that Russian government officials might have had.“

Some of that witness testimony was read out on 8 June 2021. According to the , eight witnesses say that they directly saw or heard a missile, with the direction this came from broadly corresponding to the investigators’ conclusion (that the missile was launched from a field near the village of Pervomaiske)

Eleven witnesses also said that on 17 July 2014 they had either seen the BUK missile launcher or had heard that it was in the area.  Three assert that they were at the launch site, heard or saw it flying and watched it.

One of these witnesses, identified as M58, was a fighter in the team of the sole Ukrainian defendant Leonid Kharchenko.  His statement that he was at the launch site is backed by telephone records, however he asserts that he saw the rocket explode at a height of 10 kilometres which could be in doubt as it was cloudy that day.

The testimony of X48 is also extremely important.  He stated that on 17 July 2014, shortly before MH17 was downed, he was at a checkpoint in Pervomaiske and saw a military vehicle with green missiles passing, and that this then went in the direction of an agricultural field and hid behind the trees.  He says that he then heard first a rumble, then a whistling sound, and he saw how a white trail appeared in the sky going in the direction of Torez (which is the direction which, according to radar readings and the black box, was where MH17 was).  A second later, there was an explosion, after which he saw pieces of the plane coming down.

The prosecution about X48’s testimony a year ago, when they sought to have him given protected witness status and for him to be further interviewed by the examining magistrate.  The testimony reported then is also damning.

“Like M58, X48 was present at the launch location. In brief, this witness states that on the afternoon of 17 July 2014, near a roadblock put up by the self-proclaimed DPR on the road from Snizhne to Saur-Mogila, he saw a Buk being driven, and minutes later he heard and saw a missile being launched. X48 saw the field catch fire and points out where the missile was launched. It is the same location that emerged from the investigation of the satellite images. X48 states that after the launch of the missile the Buk-TELAR was driven to the road and there were also four soldiers in identical uniforms. The uniform was khaki-coloured, with a helmet with ‘ears’ on it. These soldiers looked different from those manning the roadblock.”

The prosecution specifically asked for further questions to be put to this witness about the four soldiers, whether they had been seen near the BUK and when.

It remains to be seen how compelling the court finds such testimony to be.  It is, however, noticeable that Russian state media the testimony as being from “anonymous witnesses”.  They are not anonymous, simply protected, since they would undoubtedly be in danger were their identity to become known in militant-controlled Donbas.

Four men are being tried in their absence.  The three Russians are widely reported in the western media in terms of their roles in the Russian-controlled ‘Donetsk people’s republic’ [DPR], but all were until very recently officers of Russia’s GRU [military intelligence] or FSB.  Igor Girkin ‘DPR military commander’ was, until late 2013, a Russian FSB colonel; his deputy in ‘DPR’, Sergey Dubinsky is a ‘former’  Russian GRU officer, while Oleg Pulatov is a ‘former’ GRU spetsnaz officer. The fourth defendant is Ukrainian militant Leonid Kharchenko.  Only Pulatov is ‘taking part’ in the trial via Dutch defence lawyers, with it widely believed that the Russian state is funding his ‘defence’ which over the first year mainly delayed proceedings by demanding extra time to consider alternative versions, etc.

The four defendants are not accused themselves of actually downing MH17, but of involvement in the transportation of the BUK missile.  In announcing this first trial, that the defendants “formed a chain linking the self-proclaimed Donetsk people’s republic with the Russian Federation”.  “It was through this chain that the suspects were able to get heavily military equipment from Russia to the battlefield in eastern Ukraine”.