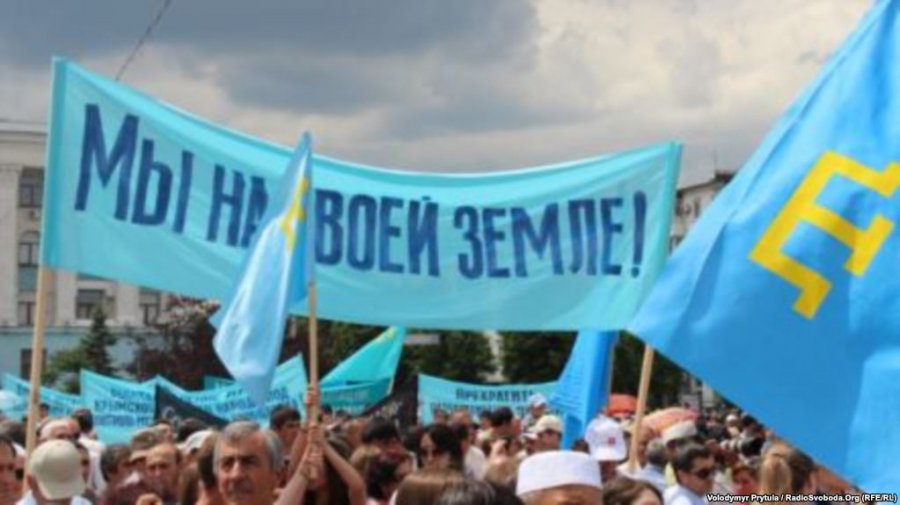 We are in our land. A rally inconceivable under Russian occupation but which this bill, once adopted, will help to make possible again

On 18 May this year, Ukrainian President Volodymyr Zelensky tabled a vital new bill in the Verkhovna Rada on Indigenous Peoples.  Just how important it is has been demonstrated by the unhealthy reaction from Russian President Vladimir Putin and other Russian politicians, and by their almost comical attempts to conceal the real reasons for their opposition to the bill.

Draft Law No. 5506  was rightly designated as ‘urgent’, but mainly because it should have been adopted around 25 years ago.  Ukraine’s Constitution in Article 11 stipulates that “the State promotes …. the development of the ethnic, cultural, linguistic and religious identity of all indigenous peoples and national minorities of Ukraine.”  There has long been a Law on National Minorities, but none on indigenous peoples, despite the fact that Article 92 of the same Constitution states clearly that the rights of indigenous peoples and national minorities are determined exclusively by the laws of Ukraine.

It is this that draft law No. 5506 will rectify, with the change of major importance to the largest indigenous people of Ukraine, the Crimean Tatars, as well as two very small indigenous peoples from Crimea: the Karaits and Krymchaks.

Worth noting that the definition of ‘indigenous peoples’ has changed significantly since the middle of the twentieth century and there has been difficulty in achieving a universally accepted definition of the kind of features that identify an indigenous people.  Here, however, the authors of the Ukrainian bill have consulted with experts in the field and the definition proposed is in keeping with international standards.  An indigenous people is defined as “an autochthonous ethnic community formed on the territory of Ukraine and having its own language and culture; having traditional, social, cultural and representative bodies; identifying itself as an indigenous people of Ukraine; constituting an ethnic minority within its [Ukraine’s] population; and not having its own state formation beyond Ukraine”.

This definition should be remembered as it contains all the real sticking points, and also explains why the Kremlin has previously exerted great effort to deny the fact that Crimean Tatars are the main indigenous people of Crimea.

In a Rossiya 1 state TV interview on 9 June, Putin claimed that Ukraine’s bill on indigenous peoples reminded him of Nazi Germany. He suggested that “the division into indigenous, first-class and second-class people and so forth” was very reminiscent of the Nazis, and all that was missing was to measure people’s skull, like in (Nazi) Germany.  It was stupid and improper, he asserted, to speak of Russians as being a non-indigenous people, and then went on to claim that Ukraine had arisen as a creation of the Soviet period and that it was therefore incorrect to divide peoples. Nobody would want to be a second-sort person, he said and then really went off into fantasy with the assertion that the bill could lead to hundreds of thousands or millions being forced to leave or begin to rewrite their identity.

This was on state television, and Putin could be quite sure that such evident lies and distortions would not be challenged.

The same was true of Russia’s State Duma which also condemned the bill, claiming it to be “outrageous provocation’, aimed at exacerbating the situation and conflicts both within Ukraine, and beyond.  They asserted that they would “demand that the European community give their assessment of the document” and mentioned all kinds of international structures, including those who almost certainly helped to draft Ukraine’s bill

While the Duma simply blustered, Putin got around the fact that the bill is in accordance with international standards by claiming that the OSCE and other Western bodies would go along with Ukraine which is seen as a counter to Russia.

What makes such purported indignation particularly absurd is that Russians would not be an indigenous people of Ukraine, according to Russian legislation, nor is the very large Ukrainian minority in the Russian Federation.  There are no grounds for believing that Putin and his ruling party-dominated parliament are unaware of this.  Quite the contrary, since, in 2016, the Kremlin commissioned a study by Sergey Sokolovskiy from the Russian Academy of Sciences Institute of Ethnology and Anthropology, aimed at ‘proving’, using entirely different arguments, that the Crimean Tatars should be considered a national minority, not an indigenous people (details here).

Russia has maintained a very old-fashioned definition of indigenous peoples, according to which these are small groups (up to 50 thousand people) who live their original traditional lifestyle.  In his study, Sokolovskiy also claimed that a people who had once been the dominant people (as the Crimean Tatars were until Russia’s first annexation in 1783) could not be an indigenous people.

In fact, international documents, such as the International Labour Organization’s Indigenous and Tribal Peoples Convention from 1989 and the UN Declaration on the Rights of Indigenous Peoples are considerably broader in scope, and essentially correspond with the definition offered in Ukraine’s bill on indigenous peoples.   Russia’s refusal to ratify these documents does not give it the right to dispute internationally recognized definitions.

The documents do, however, make the real reasons for Russian hysteria clear.  In the ILO document, for example, while Article 1.a is about tribal peoples, 1b and Article 1 § 2 have clear relevance for the Crimean Tatar people.  Emphasis is given to the fact that a people retain some or all of their own social, economic, cultural and political institutions, while self-identification on a people’s historical homeland is considered a fundamental criterion.

It is surely this self-identification of the Crimean Tatars that Russia is most afraid of, since the Crimean Tatars and their representative body, the Mejlis, have unambiguously expressed their identity as part of Ukraine.  It was the Mejlis’ implacable opposition to Russian occupation that led Russia to persecute first prominent members and then ban the entire body.  That ban remains in place despite the UN’s International Court of Justice having ordered Russia to withdraw it in April 2017.

In an important study entitled ‘The fate of the Crimean Tatars, Russia’s legal justification for annexation, and Pandora’s Box’*, Bill Bowring, Professor of Law at the UK’s Birkbeck College, analysed and dismissed the position Russia had taken over Crimea.  He explained that Russia’s claim in various documents that there had been “the implementation of the right to self-determination by the people of Crimea” was fundamentally flawed.

He wrote: “It is my contention that there is only one people with a right to self-determination in Crimea, namely the Crimean Tatar people, who assert through their representative institutions, the Qurultay and Mejlis. the right to recognition as the main indigenous people of Crimea.”

Refat Chubarov, the Head of the Mejlis whom Russia first forcibly exiled from Crimea, and then ‘sentenced’ to six years on legally nihilistic charges, also views Russia’s hysteria as based on panic over the real implications of the Law on Indigenous Peoples.  They had never doubted, he writes, that Russia would react since it follows all developments in Ukraine that will bring the end of Russian occupation of Crimea closer.  They would never have imagined, however, that a draft bill aimed merely at interpreting the term ‘indigenous peoples’ as used in Ukraine’s Constitution, and at enshrining in legislation the rights of indigenous peoples which fall within Ukraine’s international obligations, would “arouse such insane hysteria in Russia”.

He is convinced that the attempts to “camouflage” the objections as linked with concern about Russian or any other national minorities  is prompted by panic in the Kremlin that Ukraine will reinstate its sovereignty over occupied Crimea.

“Those around Putin cannot fail to understand that Ukraine is strengthening its own irrefutable right to Crimea by adding to the many present arguments the broad spectrum of international law with respect to the rights of indigenous peoples.”  It is clear, he adds, that adoption by Ukraine’s Verkhovna Rada of Zelensky’s Draft Law on Indigenous Peoples “will totally demolish one of the fictions often used by Putin and his retinue, when they talk of ‘the people of Crimea’”.

*   Bill Bowring “Who are the "Crimean People” or “People of Crimea”? The fate of the Crimean Tatars, Russia’s ‘legal justification’ for annexation, and Pandora’s Box”, chapter in Sergey Sayapin and Evhen Tsybulenko, (Editors):  The Use of Force against Ukraine and International Law: Jus Ad Bellum, Jus In Bello, Jus Post Bellum