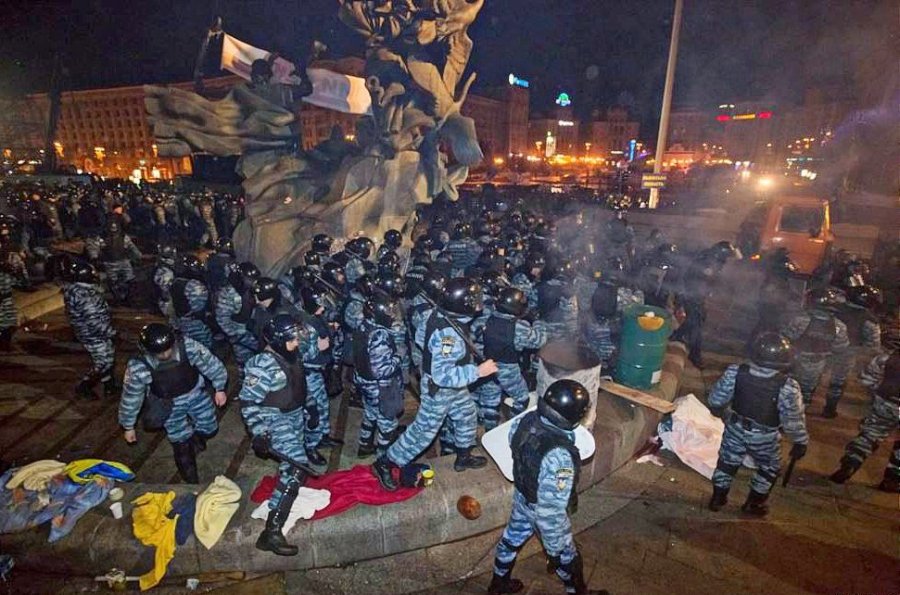 A court in Kyiv has sentenced two former Berkut special force officers to three years’ imprisonment for the role in the violent dispersal of young Maidan activists in the early hours of 30 November 2013.  It did not, however, find the men guilty of having obeyed a criminal order, although it was the sheer savagery of that Berkut attack on young people that turned Euromaidan into the mass movement now known as the Revolution of Dignity.

The ruling was passed on 14 June by Volodymyr Buhil, from the Shevchenkivsky District Court in Kyiv,, with the two men - Viktor Eismont and Volodymyr Mokhon – also prohibited from holding any kind of jobs in law enforcement for three years.  These are the first real prison sentences passed on Berkut officers and the first convictions over the events on 30 November 2013.   Eismont and Mokhon were found to have exceeded their power or official duties as a law enforcement officer.  The charge was under Article 365 § 2 of Ukraine’s Criminal Code, with paragraph two specifically referring to the use of violence; threats of violence; weapons or special means, or degrading treatment.

The men were also found guilty of two other charges – of obstructing the organization or holding of a demonstration or meeting (Article 340) and of forging official documents (Article 366).  These, however, are time-barred so no penalty was imposed.  The court also allowed the civil suit lodged by victim Maksym Fedyai against Eismont, Mokhon, the Kyiv National Police and the Interior Ministry and awarded 400 thousand UAH in compensation.

The ruling from the Kyiv can, and probably will be, appealed.  Since Eismont remains a serving police officer, he can continue to do so, pending the outcome of that appeal.  Although Berkut was disbanded after Maidan, he continues to serve in a special forces unit.  He was also an aide to Yevhen Deidei, an MP from the People’s Front party.  He did spend some time serving on the front in Donbas, which Deidei cited in defending him, claiming also that he had merely been obeying orders

Although a ‘first’, the prosecutor was also not satisfied with the sentence and may appeal against it. Oleh Bahniuk told Hromadske.ua after the verdict that he had sought six-year sentences for the men.  The court instead had partially disregarded their qualification of the crime as having been actions within an organized group and obeying a criminal order.

“We consider that this was an order and that specifically this classification fitted the actual circumstances”.

The prosecution considers that the events that night were the result of the actions of a criminal organization made up of high-ranking officials, heading by the then President Viktor Yanukovych.  The criminal plan was carried out with the help of former Interior Minister Vitaly Zakharchenko and National Security and Defence Council Andriy Kliuyev. They had issued instructions to Kliuyev’s deputy, Valery Syvkovych the head of the Kyiv Police Valery Koryak and head of the Kyiv City Administration, Oleksandr Popov. The pretext was one that had already been used in 2010, against the ‘Tax Maidan’, with the dispersal purportedly being in order to erect the New Year tree.

Judge Buhil considered that the charge of having carried out a criminal order (Article 41 § 4 was excessive and had not been proven.  He stated in court that the evidence presented had not included any information that the leadership of the Interior Ministry and the police had given orders or commands to use force against the protesters.  Buhil was not fully convinced by the ruling, which the prosecution presented, from the District Administrative Court in Kyiv on 2 April 2014, which had found the actions of the police and interior forces with respect to 30 November 2013 to have been unlawful.  That ruling, he said, had not indicated specific actions, nor those carrying them out.  In his testimony, Eismont had said that his superior, the deputy commander of the Berkut regiment, Mykola Tyahnyryadno had issued standard instructions.

The indictment against Eismont and Mokhon had been passed to the court three years ago, on 18 May 2018.  Both men were from the Kyiv Berkut and were accused of having detained Maidan activist, Maksym Fedyai, dragged him along the ground for around 50 metres and then thrown him into a police van. They then wrote reports, falsely claiming that he had been engaged in hooligan activists and had not obeyed their orders.  He was convicted on the basis of those reports, although the conviction was later overturned by a court of appeal.

It was probably these reports that enabled the men to be identified.  As Yevhenia Zakrevska, lawyer for Maidan victims, reported in October 2018, Eismont and Mokhon had dragged Fedyai away and arrested him after he had collapsed from the beatings inflicted by the men’s Berkut colleagues.

The Department of Special Investigations earlier responsible for Maidan cases earlier reported that 390 Berkut officers were involved in the savage dispersal of protesters on 30 November. Many young activists had found refuge in the nearby St Michael’s Monastery, and there were a huge number of injuries, as well as arrests.  By later that morning, a number of civic organizations and the International Renaissance Foundation had severed any cooperation with the authorities (on police reform, etc) and there was widespread protest.  In Kyiv on 1 December 2013, up to one million Ukrainians came out in protest.

Given the savagery of the Berkut actions that day, it is frustrating that this is the first conviction.  Many of the high-ranking officials are, of course, in hiding in Russia, with some spotted crushing protest in Moscow.  There are, unfortunately, many other reasons, which suggest lack of will in certain quarters, including the police, to bring those responsible to answer.