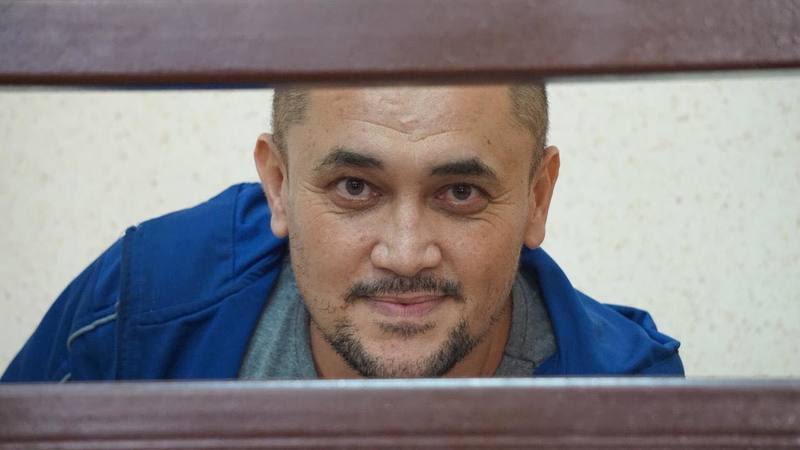 The authoritative Memorial Human Rights Centre has declared Vadim Bektemirov a political prisoner and stated clearly that Russia is persecuting him for his faith and for his civic position in occupied Crimea.  Having studied the case material, the world-renowned NGO has concluded that Bektemirov is facing a sentence of up to 20 years without any element of a crime.

Bektemirov has a higher education in Islamic Studies, but worked as a translator to support his family.  He has two daughters and a son who was born after Bektemirov was arrested on 7 July 2020, in one of the Russian FSB’s ‘operations’ against Crimean Tatars and other devout Muslims. His father died of a heart attack shortly after Bektemirov’s arrest, leaving his mother quite alone.

As well as organizing collective prayers for political prisoners, Bektemirov also regularly attended the political trials of fellow Crimean Tatars under Russian occupation and also helped in getting parcels (with food and other essential items) to the ever growing number of political prisoners held in Crimea or Russia.

The Crimean Tatar, who is turning 40 in Russian captivity on 7 July, is in no doubt as to why he is imprisoned.  At the first court hearing, on 26 May 2021, Bektemirov stated: “I merely practised my religion, and it is for that reason that I am here.  This is a continuation of the genocide which began under Stalin. This is repression against my people and against me, this is why I’ve ended up here. My arrest is linked solely with the fact that I am a Muslim and Crimean Tatar, and therefore the FSB didn’t particularly go to any effort.”

Bektemirov’s ‘case’ is one of several where the FSB certainly do seem to be trying to fast-track ‘convictions’ and sentences without exerting themselves overly, but also without attracting attention.  It is also possible that the ‘statistics’ are better for FSB officers who are known to get bonuses or promotions for such persecution if they separate the men out as much as possible. That way each trial counts as a separate ‘case cracked’.

Seven men were arrested on 7 July 2020 following 11 armed searches in which masked men brandishing machine guns found nothing among books, children’s toys and clothes but the so-called ‘prohibited books’ that they had almost certainly brought with them. In all such ‘operations’ in occupied Crimea, lawyers are prevented from being present and the FSB illegally bring the supposedly ‘independent witnesses’ with them. Vadim Bektemirov was one of four men, together with Alexander Sizikov; Alim Sufianov and Emil Ziyadinov, who were probably targeted because they had taken part in activities to help political prisoners and circulated information about repression in Crimea. Three other men were also arrested: Ismet Ibragimov; Seiran Khairedinov and Zekirya Muratov.  Although this ‘operation’ aroused particular revulsion since Sizikov is totally blind and disabled, there are strong grounds for believing that Muratov, who is also on trial alone, was arrested because he had refused to collaborate with the FSB by giving false testimony against other Crimean Tatars (details here).

Due to the disjointed nature of these arrests, Memorial has not issued a statement about all of the men arrested at the same time.  Nonetheless, all of the grounds given for recognizing Bektemirov as a political prisoner apply to the other men as well, and statements will doubtless soon be issued.

Vadim Bektemirov’s children, from left Aishe, Asiye and Akhmad, who was born after his father’s arrest Photos from Crimean Solidarity

Bektemirov and the others are all essentially accused solely of unproven involvement in the peaceful Muslim organization Hizb ut-Tahrir, which is legal in Ukraine and most countries.  It is likely that the Russian Supreme Court’s secret ruling in 2003, finding Hizb ut-Tahrir ‘terrorist’, was passed for political reasons, with Moscow looking for a way of forcibly sending Uzbek refugees back to Uzbekistan where they faced religious persecution.  In these cases, the FSB either charge a person with the more serious ‘organizing a Hizb ut-Tahrir group’, under Article 205.5 § 1 of Russia’s criminal code, with ‘involvement’ in such an alleged group, under Article 205.5 § 2.  Such designation seems fairly arbitrary, but makes a huge difference to the likely sentences since those accused of ‘organizing’ are guaranteed a 17-19-year sentence (or more).  The ‘involvement’ charge, which Bektemirov is facing, carries a sentence of between 10 and 20 years.  of from 10 to 20 years.

Memorial HRC is convinced that Bektemirov is being persecuted for peacefully practising his faith and that “he has been deprived of his liberty despite the absence of elements of a crime, in order to stop his religious activities, and also to crush civic activism in annexed Crimea.)

Bektemirov’s trial began at the Southern District Military Court in Rostov-on-Don on 26 May 2021.

The indictment revolves around alleged evidence of his involvement in Hizb ut-Tahrir  This consists of two ‘secret witnesses’ whose testimony cannot be verified, and who may not even known Bektemirov. They claim that from 2015 to 2018 Bektemirov took them conspiratory meetings of the supposed Hizb ut-Tahrir  group, drew in new followers; held explanatory discussions in mosques; and also discussed the persecution of Muslims in Crimea.

The material also mentions a video where, it is claimed, Bektemirov in April 2015 justified the activities and propagated the ideas of Hizb ut-Tahrir  before theose present. The ‘evidence’ also includes a list of Islamic literature found during the search.

None of this is illegal in Ukraine, or in any democratic country. Memorial HRC stresses that the mere (alleged) fact of involvement in Hizb ut-Tahrir  is enough for Russia to arrest and try Bektemirov under Russia’s ‘terrorism’ legislation. “As in many similar cases, Vadim Bektemirov is not accused of planning or of carrying out a terrorist attack, or of making terrorist threats or calls to violence. Instead of this, the indictment mentions such evidence as participation in a meeting of believers and invitation of new people to this; discussion of religious topics; and reading of Islamic literature.”

Memorial reiterates its longstanding position that the 2003 Supreme Court ruling (passed in secret) was totally flawed and that there are no grounds for labelling Hizb ut-Tahrir  a terrorist organization. They are not aware of a single case where members of the organization have committed or planned any terrorist acts anywhere in the world.

The Supreme Court ruling made it possible to claim ‘investigation of terrorist activities’ without having to prove that terrorist acts were committed or planned. “The Russian FSB use this, artificially increasing their statistics on solving ‘terrorist’ crimes.”

Memorial HRC also points out that in occupied Crimea, such prosecutions are being used to persecute Crimean Tatars who opposed Russian annexation.