There are signs of usurpation of power: a statement by human rights organizations regarding sanctions against Ukrainian citizensZelensky’s ethnically profiled ‘sanctions’ put Ukraine on a level even Russia has not reached Russia destroys or damages over 1100 Ukrainian hospitals and plunders othersRussia instals FSB man, other Russians to ‘govern’ occupied Kherson where the population hates themRussia destroys Mariupol and tries to get illegally deported residents to move to Siberia Russian parliamentarians move to ‘defend compatriots’ by recognizing Donbas pseudo ‘republics’ Ukraine’s ex-President Poroshenko accused of ‘treason’ and ‘financing terrorism’Sanction accomplices to Russia"s revenge persecution of Crimean Tatar leader Nariman DzhelyalA great age approaches (statement of the First of December Initiative Group) EU sanctions ‘judges’ and others involved in the repression Russia brought to occupied Crimea Where are you going, Ukraine?Germany’s Nord Stream 2 collaboration comes as Russia holds a record number of Ukrainian political prisoners A brief description of the KHPG strategic litigations in the first half of 2021Legal Opinion on the political motives of the criminal prosecution and violations of human rights in criminal proceedings of Konstantin ZhevagoRussia launches attack on author of PACE report condemning human rights violations against Crimean TatarsHow can Ukraine’s leaders hand Babyn Yar into private Russian hands? Prisoners’ rights in Ukraine 2014-2021: KHPG reportUkrainian could face prison for Victory flag in memory of his grandfather who fought in WWIIAppeal of human rights organizations to the UN Special Rapporteur on Combating Torture regarding the shameful response of the Government of Ukraine to the CPT report on the results of the ad hoc visit in August 2020On the situation in prison colonies №77, №100, №25. Following the visit of the European Committee for the Prevention of Torture and Inhuman or Degrading Treatment or Punishment (CPT) from 4 to 13 August 2020
• Topics / Politics and human rights

Zelensky imposes sanctions against men who fought for Ukraine in Donbas 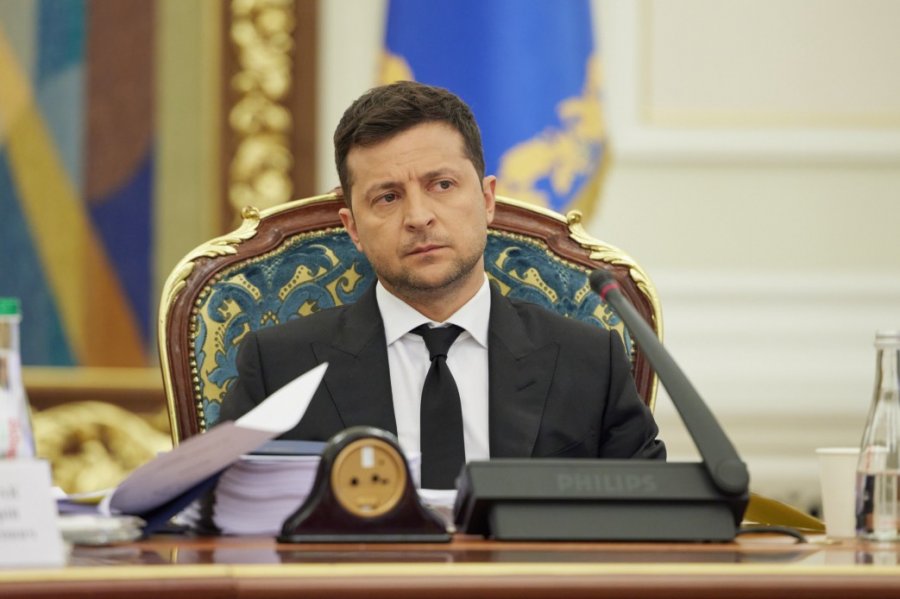 At least seven men who defended Ukraine against Russia and its proxies in Donbas have been placed under Ukrainian ‘sanctions’. The six Chechens and one Dagestani now face deportation, although they are all citizens of the Russian Federation and would certainly face persecution and torture in Russia for their support of Ukraine.  This treatment of men who risked their lives for Ukraine may be the most shocking move to date by Ukraine’s National Security and Defence Council [NSDC],  but the list of people wrongly targeted by President Volodymyr Zelensky and the Council that he chairs is considerable. It is especially disturbing that the majority of those targeted are from the Caucasus. Some of them have residency status in Ukraine and are married with children who are Ukrainian citizens.  They now face deportation, although they are categorically not the ‘criminal bosses’, etc. that Zelensky, Interior Minister Arsen Avakov and others have claimed.  This new application of RNBC sanctions has only exacerbated many of the concerns about Zelensky’s use of such measures, and the increasing role being played by the Council.

There has been major use of NSDC sanctions in 2021, following the first imposed on 2 February against Ukrainian MP Taras Kozak and his companies, including those linked with three TV channels: 112.ua; NewsOne and Zik.  Kozak had officially purchased the channels in 2018-2019, however he is a close associate of Viktor Medvedchuk,  leader of the main pro-Russian parliamentary faction ‘Opposition Platform For Life’, and the latter is widely viewed as the force behind the channels.  The sanctions were imposed for five years, with Kozak’s assets blocked, as well as the broadcasting of the three channels.

Ukraine’s Law on Sanctions does not envisage sanctions against Ukrainian citizens unless they fall under the category of individuals engaged in terrorist activity or are outside the reach of Ukrainian justice.

Although there was nothing to suggest that criminal proceedings against Kozak over terrorism had even been initiated, there was fairly widespread support for this move.  The three channels had been identified by media watchdogs as responsible for over 50% of the pro-Russian propaganda and disinformation in Ukraine.  There is considerable distrust of the judicial system in Ukraine and there have been many eyebrow-raising rulings from the District Administrative Court in Kyiv. The fact, therefore, that a presidential decree can only be challenged in the Supreme Court was viewed as an advantage.

Here too, the sanctions were limited to three years and were of economic consequences only, with assets frozen.

Reaction even within human rights groups was mixed, with all seeing potential for abuse in such use of sanctions, but some viewing them as legitimate given Russia’s undeclared war against Ukraine.  As has become evident from Ukraine’s cases against Russia in international courts, it takes years for cases to even be accepted for consideration.  Human rights lawyer Volodymyr Yavorskyy supported the moves against the channels, albeit with several caveats, on the grounds that such channels and the political forces behind them really are financed by the aggressor state.  If, with the help of such means, they are able to gain a majority in parliament, all of the achievements of the last 10 days would be negated.

After yet another NSDC decision and presidential decree from 2 April imposed sanctions against Ukrainian citizens living in government-controlled Ukraine who had not been convicted of any crimes, a strongly-worded statement was issued by the heads of five Ukrainian human rights NGOs (the Kharkiv Human Rights Protection Group [KHPG]; the Ukrainian Helsinki Human Rights Union; the Centre for Civil Liberties; the Regional Centre for Human Rights and the Ukrainian Institute of Human Rights).  They wrote that such use of sanctions was in violation of Ukraine’s Constitution and international treaties; undermined fundamental principles of law and posed a serious threat to people’s rights and civil liberties.  They suggested that the measures bore the hallmarks of usurpation of power since the Security Council was taking on a role which, in a law-based society, is the prerogative of the law enforcement bodies and the courts.  The Council, with Zelensky’s help, is effectively taking on the role of the court, with the targeted individual deprived of his or her right to a fair trial.

It is, unfortunately, clear that Zelensky and the Servant of the People party associated with him have gained political dividends from these sanctions. This is both because of support from many who had earlier viewed his presidency with distrust, and quite simply because of the silencing of key media outlets associated with Medvedchuk and his pro-Russian party.

There was a further NSDC decision and presidential decree on 21 April, and then the above-mentioned bulk sanctions targeting, among others, defenders of Ukraine, signed by Zelensky into force on 21 May.

KHPG Director, Yevhen Zakharov, has analysed the last list, and believes that of the 674 items on it, only about 11-12% legitimately impose sanctions (for example, against Denis Pushilin and Leonid Pasichnyk, ‘leaders’ of the Russian proxy ‘Donetsk and Luhansk people’s republics’, respectively).

An announcement on the President’s website reported that Zelensky had “held an NSDC sitting at which sanctions were applied against criminal bosses”. Sanctions, it was asserted, had been “applied against 557 so-called criminal bosses, 542 of whom are foreign nationals and 15 are Ukrainian citizens.” Sanctions had also been applied against 11 citizens of foreign states currently in Ukraine and “considered to be criminal authorities». The same disregard for the justice system and the presumption of innocence was demonstrated, and not for the first time, by Interior Minister Arsen Avakov, as well as by NSDC Secretary Danilov.  At the briefing on 4 June, Danilov, quoting Avakov’s “report on implementation” of the latest sanctions, claimed that there were now no “criminal bosses” in Ukraine.

It is easy to see why Ukraine’s top officials would want some of the gloss from these apparently quick-fix and populist methods of ‘fighting crime’.  The public hear that so many ‘criminal bosses’ have been removed from Ukraine or sanctioned, and they do not ask fundamental questions about how we know that they really are criminals, etc.

The reality is very different.  Among the latest 674 targets are probably more men who have served Ukraine on the front in Donetsk, but the names and their battalion are known of seven men.

The sanctions, which are of indefinite force, involve the freezing of assets; a ban on entering Ukraine; the revoking of visas, residency status, etc and forced deportation.

In at least the case of these seven men, this means that Ukraine has watched them risk their lives in battle and then deports them from the country. They would have the choice of country, rather than being forcibly sent back to Russia where they would undoubtedly be tortured and imprisoned. They would probably go to Turkey which will accept them, but will not, because of the Ukrainian sanctions, give them full legal status. It would be difficult to find words for such treachery.

The situation in many other cases is also of profound concern.  A significant number of the targeted individuals have lived in Ukraine for years and have no connection with crime.  Looking at the list, it really does appear that the vast majority (503 people) have been selected because they are from the Caucasus (366 people from Georgia; 48 from Azerbaijan; 37 from Armenia; 36 from Chechnya; 15 from Dagestan and 1 from Abkhazia).

On 17 June, participants in a Human Rights Agenda press conference on these NSDC sanction lists learned first-hand about the human cost of such barbarism from one of its victims.  Vakha Isayev is a 38-year-old architect and businessmen, originally from Chechnya, who has lived in Ukraine for over 15 years with his wife, and their three children, who are Ukrainian citizens. He has a successful business, with partners in several European countries and the USA.

His problems began in November 2020, when he suddenly discovered, without any explanation, that his permanent residency status had been annulled.  He appealed against this decision and won, and then, when the authorities lodged an appeal, he won that also.  He suspects that this did not please those who wanted him to use an illicit means of ‘resolving the problem’.  He had gone through the courts and the latter had found he was in the right.  He says he was already hoping that his problems were over when, suddenly, in May, he found that he’d been placed on the sanctions list.   He says that he has even spoken with enforcement officers who admit that they now know that the original persecution and withdrawal of his residency permit were unwarranted.  They claim however that there’s nothing that they can do because he’s now on the NSDC sanction list and it would be putting Zelensky in a bad position if this comes out now.  He notes that Danilov has claimed that the lists are drawn up in cooperation with enforcement agencies from other countries as well.  Why, if that were the case, he asks, has he been able to receive an open visa to the USA and countless visas to various European countries?   He is planning to turn to the European Court of Human Rights, but at this immediate time is forced to live in hiding, and it took courage to appear at the press conference.

As mentioned, the presidential decrees imposing these sanctions can be challenged in the Supreme Court, and several cases are now underway.  Even here the situation has been complicated by the fact that the SBU recently removed judges’ access to state secrets, and a first panel of judges has already removed itself from one case where such access was required.

Ukraine’s judicial system is very flawed, but needs to be reformed, not dangerously bypassed by the President and National Security and Defence Council of Europe.