Only 0.09% of schoolkids study in Ukrainian in Russian-occupied Crimea despite Hague Court order 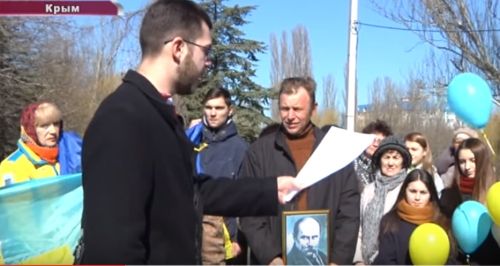 Meeting in honour of Taras Shevchenko on 9 March 2015 (the anniversary of the great Ukrainian poet’s birth) in occupied Simferopol, shortly before several participants were detained Photo Krym.org

In 2017, Russia was ordered by the UN’s International Court of Justice to “ensure the availability in education of the Ukrainian language” in occupied Crimea. Instead of ending its discrimination of both ethnic Ukrainians and Crimean Tatars, it opted for pretence and doctored statistics. A ‘law’ passed by the occupation regime in 2017, recognizing three official languages in occupied Crimea – Ukrainian, Crimean Tatar and Russia – is a mere façade, as several Crimean Tatar political prisoners discovered recently when they were thrown out of their own ‘trial’ for insisting on speaking Crimean Tatar.

The law was passed by the occupation authorities and refers to ‘the state languages of the republic of Crimea”.  It supposedly guarantees equality of the conditions for the development and use of all three official languages.  The court that is refusing to allow political prisoners to speak in their native language and to have documents in Crimean Tatar, is located in Russia.  This, however, is hardly an excuse when Russia is flagrantly violating the Fourth Geneva Convention, both by prosecuting Ukrainian citizens under Russian law, and by forcibly taking them to Russia.  The fact that the men are imprisoned at all, and that they are facing huge sentences without any crime, clearly already violates the very principles of a law-based society, however the refusal to allow them to use their native language is also an egregious violation of their right to a fair trial.  Several of the older men do not feel sufficiently confident using Russian.

In occupied Crimea, there is no formal ban on using Ukrainian or Crimean Tatars.  Andriy Shchekun, editor of Krymska Svitlytsa (now published in mainland Ukraine) notes that there are none of the decrees and orders that in the Russian empire prohibited the use of Ukrainian. “There is, however, a hybrid war. Officials and school heads tend to ask “What do you want Ukrainian for?  Why do you want to have problems and conversations with the FSB? They try to persuade people that it’s not needed now in Crimea”.

In a recent study on seven years under Russian occupation, the Crimean Human Rights Group and other NGOs reported a catastrophic fall in the number of schoolchildren studying in Ukrainian.  The number of students was 36 times lower than in 2014, while the number of classes with teaching in Ukrainian had fallen by 31 times.  There was a sharp decrease in all options for education in Ukrainian, and even for learning Ukrainian as a subject.  According to the Russian occupation statistics, the percentage of children studying in Crimean Tatar has not changed significantly, although human rights NGOs believe that the figures do not correspond to the true situation.

Schools themselves, and the occupation authorities, will try to claim that reduced (or non-existent) availability of education is merely because there is no demand for lessons in Ukrainian or Crimean Tatar.  In fact, parents are often placed under huge pressure to not insist on these classes.  Parents understand the difficulties either their children, or they themselves, could face if they do not give in.  There is also the fact that, even those children who do study in Ukrainian or Crimean Tatar up till the end of the ninth grade, will have to change to Russian for the last two years of school education.  These two years are critical for any young person wanting to enrol in higher education.

Officially the statistics are considerably better, with 31 thousand children learning Crimean Tatar as a subject (although this may be an optional subject, and for a very snall number of hours a week).  According to the occupation authorities’ statistics, 6,5 thousand schoolchildren study in Crimean Tatar.  There are, however, major problems with textbooks, and many subjects are not covered at all, nor are there any beyond the ninth grade.

Civic organizations, furthermore, dispute these statistics and say that the education “in Crimean Tatar” is on paper alone.  Back in 2019, the Crimean Human Rights Group demonstrated how the statistics lie.  In three schools they monitored, where classes were supposed to be taught in Crimean Tatar, only some lessons were not in Russian.   In one of the schools, Crimean Tatar as a separate subject was taught only up to the ninth grade (not the tenth and eleventh).  10 of the 18 schools visited, which were claimed by the ‘ministry’ to have classes in Crimean Tatar, had signs in front of the schools only in Russian.

Monitoring back in 2019 found that there was not a single school in occupied Crimea offering teaching in Ukrainian.   School No. 20 in Feodosia which was supposed to be a school with teaching in Ukrainian is, according to parents, now taught solely in Russian.  Ukrainian Language as a separate subject is only taught in some classes.

It is easy to see why.  Neither of the provisional orders which ICJ issued back on 19 April 2017 (primarily the reinstatement of the Mejlis of the Crimean Tatar people, and making education in the Ukrainian language available) have been followed.  There is ample evidence from monitoring visits to demonstrate that the ‘statistics’ presented of the situation with education in Crimean Tatar are doctored.  The situation with Ukrainian language education is too catastrophe to even attempt concealment.  From almost 13 thousand students, or 7.3% of all schoolchildren, on the eve of Russia’s invasion, a mere 206 students were officially reported to be studying in Ukrainian by 2019/2020.  That is 0.09% of all children in Ukrainian Crimea under Russian occupation.