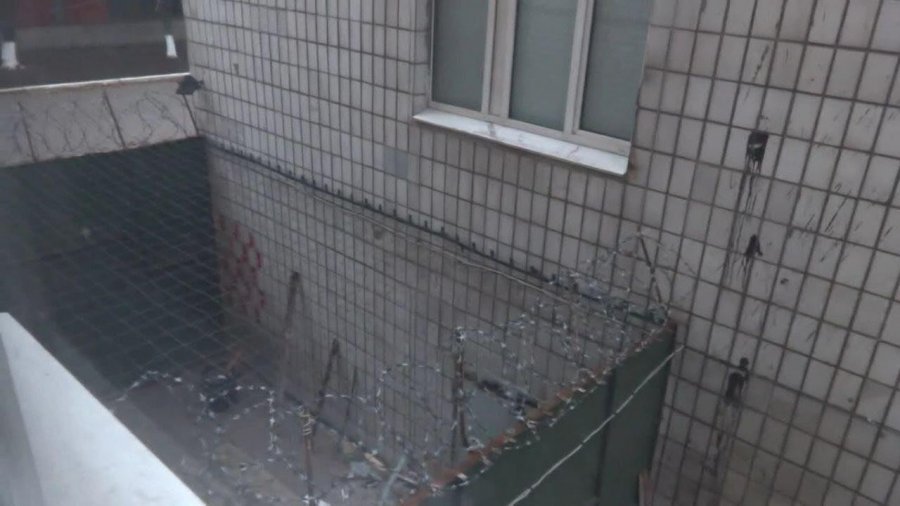 One of the most brutal places of incarceration in the occupied territories of Eastern Ukraine – the so-called “Donetsk” and “Lugansk Peoples Republics” known by their Russian acronyms DNR/LNR – is the secret Izoliatsiia (Isolation) prison in the city of Donets’k. Since 2018, Izoliatsiia has become widely known in mass media and especially notorious for its cruelty. Among others, Stanislav Aseyev, who was held in the prison for 28 months, has published widely on Izoliatsiia.

According to Aseyev’s first-hand observations in Izoliatsiia, more than a hundred civilians went through the de facto concentration camp, in 2018-2019. Most of the captives in the Izoliatsiia prison experienced torture by electric shocks, beating, psychological torture, mock executions as well as rape. Many were forced to do hard physical labor.

The Office of the United Nations High Commissioner for Human Rights [OHCHR] Report on the Human Rights Situation in Ukraine 16 November 2019 to 15 February 2020 (pp. 38-42) collected extensive witness testimonies on, among others, the Izoliatsiia torture prison:

“One detainee told OHCHR that his cellmates told him they had been ordered by the ‘Izoliatsiia’ guards ‘to make him talk’, and therefore forced him to march in place all night long in the cell, saying ‘If you do not do it, they will hurt all of us’. Detainees told OHCHR that in ‘Izoliatsiia’, ‘press cells’ were set up, where detainees were intimidated or beaten by cellmates to make them confess. One detainee was threatened that he would be forced to perform oral sex on other detainees in a ‘press cell’ if he did not confess. […] In addition to the beatings during interrogations, ‘Izoliatsiia’ detainees told OHCHR that personnel and other detainees cooperating with the ‘administration’ would beat them to coerce them to confess or to punish them for their alleged pro-Ukraine views or for allegedly disobeying the rules or orders. One detainee was regularly beaten for a year while in ‘Izoliatsiia’ as punishment for his pro-Ukraine views. Guards stepped on his toes and used a baton to hit him on his heels and legs causing him severe pain. Another detainee said he was beaten daily to make him confess and needed help to stand or use the toilet. […] In ‘Izoliatsiia’, a separate room with a table and relevant equipment was used to administer electric shocks. For example, one detainee was tied to the table, hand cuffed and hooded. Perpetrators attached one electrode to his genitalia and inserted a metal tube with a second electrode into his anus. He was subjected to painful electric shocks for several minutes, during which he lost consciousness several times. When he screamed, they put a cloth into his mouth. Another detainee told OHCHR that he was put on the table, hooded and with his arms and legs tied. Perpetrators attached electric wires to his feet and poured water on them. Some detainees held in ‘Izoliatsiia’ could not prevent themselves from urinating and defecating during electrocution. […A]nother detainee told OHCHR that [...h]is genitalia was also repeatedly hit with a metal rod. As a result of this torture and sexual violence, the skin on his genitalia turned black and peeled off over several weeks. After refusing to confess to espionage, one detainee was put in a cell where one of the cellmates took off his pants and attempted to force the victim to engage in oral sex. Another detainee said that he witnessed the head of the ‘Izoliatsiia’ detention facility come to the cell and order detainees to engage in oral sex. One detainee told OHCHR that while in ‘Izoliatsiia’, he heard guards scream at female detainees on their way to the shower: ‘Go shave your [vaginas]. You are about to go upstairs to work it off.’ […] Several detainees reported that in ‘Izoliatsiia’, a health professional was present during their interrogations and torture. The man revived those who lost consciousness, and guided the perpetrators about how to torture to inflict maximum pain without causing death. He also examined detainees before the torture and asked about their medical conditions; measured their blood pressure or pulse; and gave injections. He told one detainee during torture: ‘We can kill you anytime we want.’”

Oddly, not only pro-Ukrainian and accidental civilians, but also numerous former so-called “insurgents” (opolchentsy) – i.e. previous DNR/LNR volunteer fighters or mercenaries from both Ukraine and Russia – have been held in Izoliatsiia and other detention facilities. During his more than two years at Izoliatsiia, Aseyev personally met and talked to:

There were additional pro-Russian Ukrainian or Russian inmates during Aseyev’s term held in Izoliatsiia. These fighters not only sat in the same cells as those Ukrainians accused and sentenced because of their real or alleged pro-Ukrainian activities. The pro-Russian prisoners at Izoliatsiia went through similarly brutal torture often designed to extract preformulated confessions on, for instance, spying for Kyiv. The brutal persecution of “one’s own people” is a practice reminiscent of the Stalinist purges of the Bolshevik party and Soviet regime of the 1930s.

Stanislav Aseyev is an Expert on the Donbas with the Ukrainian Institute for the Future in Kyiv, and author of, among other books, “A ‘Light Path’: The History of a Concentration Camp” (L’viv: Old Lion Press, 2020).

Andreas Umland is a Research Fellow at the Stockholm Center for Eastern European Studies, and editor of the book series “Soviet and Post-Soviet Politics and Society” published by ibidem Press in Stuttgart.

A larger report on prisoners in the occupied Donbas has been published in April 2021 by the Swedish Institute of International Affairs here: https://www.ui.se/butiken/uis-publikationer/ui-report/2021/prisoners-as-political-commodities-in-the-occupied-areas-of-the-donbas/.