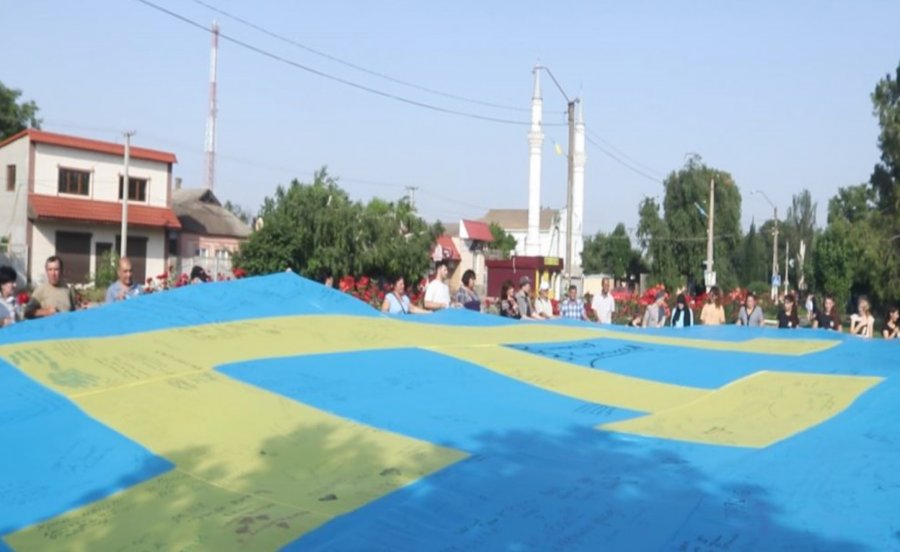 Russian-controlled enforcement officers in occupied Crimea have spent the last several days harassing prominent members of the Crimean Tatar community and issuing formal ‘warnings’ against so-called ‘extremist actions aimed at destabilizing the situation” in their specific part of Crimea.  Such ‘warnings’ have been part of Russia’s arsenal since its annexation of Crimea.  They do, however, seem a particularly surreal way for the enforcement bodies to spend their time given the catastrophic damage caused by recent flooding.

The Russian occupation regime was, of course, reacting to Crimean Tatar Flag Day on 26 June.  The flag was established by the first Crimean Tatar Qurultay, or National Congress, of the Crimean Tatar people in 1917.  Like Ukraine’s National Republic, the Qurultay was crushed by the Bolsheviks, and was reinstated exactly 30 years ago, on 26 June 1991. The Mejlis of the Crimean Tatar people is the self-governing executive body during the period between sessions of the Qurultay.  Russia began persecuting or forcibly exiling individual members of the Mejlis soon after its invasion and occupation of Crimea and in 2016 banned the Mejlis, claiming it to be ‘extremist’.  It is flouting a 2017 order from the UN’s International Court of Justice to withdraw this ban, and the ‘warnings’ issued in occupied Crimea this week claim that the actions “of an extremist nature aimed at destabilizing the situation” are organized by the Mejlis.

There is no other possible interpretation of ‘extremism’ nor any justification for the ‘warnings’ that Russian-controlled enforcement officers or prosecutors bring around to dozens of Crimean Tatars before any important anniversary.  This includes the anniversary of the Deportation of the entire Crimean Tatar people under Stalin, although Russia banned any mass events honouring the victims of this act of genocide within two months of annexation.

In mainland Ukraine, members of the Mejlis have been actively involved, together with very many Crimean Tatars and other Ukrainians, in marking the 30th anniversary of the reinstatement of the Qurultay and 30th Crimean Tatar Flag Day through a marathon ten-day flag-bearing journey.  The huge flag, (16 by 9 metres with messages written in Crimean Tatar and Ukrainian) and its bearers travelled around all parts of mainland Ukraine, returning to Kyiv on 24 June. 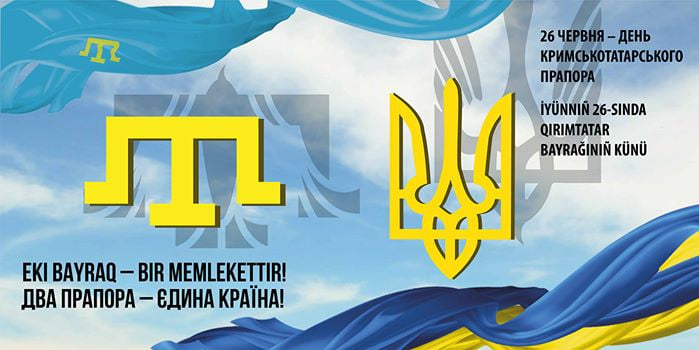 There will be events at an official level throughout (unoccupied) Ukraine on 26 June, as well as abroad.  While such events will mainly be organized by members of the Crimean Tatar and Ukrainian Diaspora, it is hoped that diplomats and others will join Ukrainian embassy staff in flash-mobs to mark the anniversary, as they did in Copenhagen in 2020.

On Saturday, 26 June, the annual car rally with flags which Russia is now banning in occupied Crimea will be held through Kyiv’s streets.  It will begin at the International Exhibition Centre at 16.30 and end around an hour later on Maidan Nezalezhnosti / Independence Square.   This will be followed by a procession through Khreschatyk, followed by a concert at 18.30 under the title: ‘Two Flags – One Country.’

If you are in Kyiv, please join in!  You can also take part from other countries, via your own flash-mobs, etc., on Twitter and other social media.

Please also remember that Russia’s offensive against Crimean Tatars has not been confined to meaningless ‘warnings against extremism’.  The vast majority of Ukrainian political prisoners held in Crimea or Russia are Crimean Tatars.  They include human rights defender Emir-Usein Kuku who will be turning 45 on 26 June, his sixth birthday in Russian captivity.  Details about Kuku and the other five recognized Amnesty International prisoners of conscience whom Russia sentenced, without any crime, to huge terms of imprisonment can be found below.  PLEASE WRITE TO THE MEN!  This tells them they are not forgotten and sends a clear message to Moscow as well.