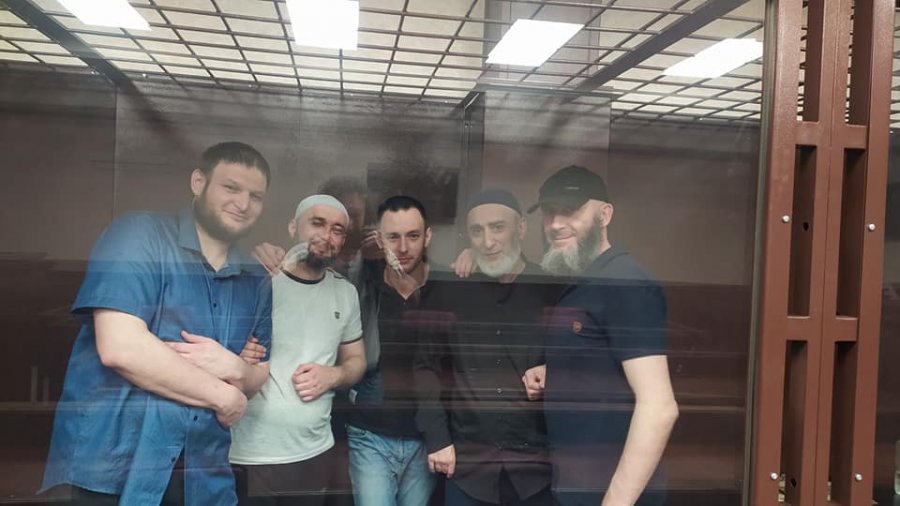 The Russian prosecutor has suddenly decided not to question two of six ‘anonymous witnesses’ in the internationally condemned trials of 25 Crimean Tatar civic activists and journalists.  No reason has been provided, but the defence believe they may simply not have been able to find such alleged ‘witnesses’, especially given the grilling that the first four have received and the incriminating discrepancies exposed in their testimony.

Russia was recently criticized in the UN Secretary General’s report on occupied Crimea for convictions based almost exclusively on anonymous testimony.  The number of such convictions is already extremely high and will rise since essentially all of Russia’s trials of Crimean Tatars on unproven involvement in the peaceful Hizb ut-Tahrir movement, which is legal in Ukraine, are totally dependent on ‘secret witnesses’, whose testimony cannot be verified.

Russia’s obvious targeting of civic activists and journalists in March 2019 provoked international criticism with this likely to have been one of the reasons why Russia has split one ‘trial’ into five identical clones. This makes it much harder to follow all the hearings but does mean that there will be five occasions for each anonymous witness to be caught out lying.

It is important to stress that not one open witness has testified against the men, with all ‘testimony’ backing the prosecution’s charges against the men coming from secret witnesses.  No credible reason has ever been provided for keeping their identity secret, yet the court invariably rejects applications for the men to be identified.  As pointed out in the UN report, the court frequently rejects, or limits, questioning aimed at demonstrating the discrepancies in these anonymous individuals’ claims.

The court was, however, unable to conceal one extremely incriminating discrepancy in the witness’ testimony which came to light on 21 June during the trial of civic journalist Remzi Bekirov and civic activists: Rayim Aivazov; Farkhod Bazarov; Riza Izetov and Shaban Umerov.  All 25 civic journalists and/or activists are charged under Russia’s ‘terrorism’ legislation due to a highly secretive and unexplained ruling by Russia’s Supreme Court in 2003 declaring Hizb ut-Tahrir ‘terrorist’, despite no evidence of terrorist acts anywhere in the world.  Some are charged with ‘organizing a Hizb ut-Tahrir group’ under Article 205.5 § 1 of Russia’s criminal code, the others with involvement in such an alleged group (Article 205.5 § 2).  All 25 men have also been charged (under Article 278) with  “planning a violent seizure of power and change in Russia’s constitutional order”, something they must have wanted to do with the power of words, since no weapons, etc. were found.

Without any internationally recognized crime, men charged as ‘organizers’ are facing sentences of 18 – 20 years.  The sentences for so-called ‘involvement’ are also huge, but may be five or more years lower.

The ‘anonymous witness’, identified in the case as ‘Faritov’, is supposed to have testified against the defendants two and a half years ago, and was then questioned, by video link and with voice distortion, over two or three hearings in June 2021.  Faritov’s earlier testimony to the investigator clearly preceded the arrest of Rayim Aivazov during the night from 16-17 April 2019.  Back in 2019, Faritov, who is alleged to have taken part in ‘conspiratorial meetings of the so-called Hizb ut-Tahrir group’, did not mention Aivazov at all.  He did, however, claim that Farkhod Bazarov had been one of the leaders / organizers of this ‘group’.

This was in full accordance with the FSB story in March 2019.  That story, however, changed, in one case for very sinister reasons.   Aivazov was seized by FSB officers when returning home from mainland Ukraine late on 16 April 2019.  He disappeared, shortly after texting his wife to say he was at the Russian checkpoint and that he seemed to be waiting too long.  He was only able to inform his family the following afternoon that he had been arrested.  As soon as he was allowed to see his lawyer, he retracted his supposed ‘confession’ and ‘testimony’ against the men arrested earlier and described in detail how these had been extracted through torture (more information here).

It was after Aivazov first formally retracted his supposed confession, and with his lawyer, Maria Eismont as witness, that the civic activist was first warned that he would “in that case” get the harsher of the two charges.  This is exactly what happened in August 2020.

During his interrogation in June 2021, Mr Anonymous ‘Faritov’ totally changed his testimony.  In full accordance with the FSB’s adjusted indictment, he now claimed to remember that Aivazov, whom he had ‘forgotten’ in 2019, was one of the organizers, and that he had somehow also ‘recalled’ that Bazarov was merely a participant.

It should be stressed that the meetings where he allegedly met the men were in 2016, almost three years before the major operation that began on 27 March 2019.  The conversations illicitly taped during those meetings were entirely innocuous discussions on religious topics, on what courage is, and about Russia’s persecution of believers.  The FSB have their own pseudo ‘experts’ who are willing to provide assessments in which they claim that a particular word or subject ‘proves’ that the men are members of Hizb ut-Tahrir.

Even in a Russian court, such flights of consciousness by so-called ‘experts’ would look very poor, especially given the huge period of time that had elapsed between the conversations and the men’s arrest.  It is the anonymous witnesses whose supposed ‘testimony’ gives some meat to the charges.

The UN Secretary-General’s report, as well as earlier reports from the UN High Commissioner for Human Rights, have noted serious grounds for believing that the courts in many trials of Ukrainians take the side of the prosecution.  In this case, presiding judge Oleg Volkov, together with Vitaly Mamedov and Magomedbasir Shuyapov, from Russia’s Southern District Military Court, are abetting the FSB first in concealing the torture used to extract ‘confessions’ from Aivazov and the mobile phone they stole, which would corroborate Aivazov’s story, then in refusing to discard a confession which the defendant has said was given under duress.  They have also, from the outset, denied the men their right to a fair trial by allowing obviously dodgy testimony despite the lack of any justification for keeping anonymous witnesses’ identity secret.   The same is, of course, true of prosecutor Yevgeny Kolpikov.

Since 2016, the FSB have been using ‘Hizb ut-Tahrir’ charges in occupied Crimea as a weapon of repression, especially against civic journalists and activists from the Crimean Solidarity civic initiative.   The arrests on 27 March 2019 were condemned by Human Rights Watch who stated that “the sweeping arrests in Crimea aim to portray politically active Crimean Tatars as terrorists as a way to silence them”.  All of the men were recognized almost immediately as political prisoners by the Memorial Human Rights Centre, and their release has been demanded by, among others, the European Parliament and US State Department.