Zelensky imposes sanctions against men who fought for Ukraine in Donbas There are signs of usurpation of power: a statement by human rights organizations regarding sanctions against Ukrainian citizensDespite Russia admitting to terrorism against Ukraine, OSCE will not expel it Russia destroys or damages over 1100 Ukrainian hospitals and plunders others“He lay on the sidewalk, naming towns and cities in Ukraine”. A digest of anti-war activities in Russia, 23-29 JulyRussia instals FSB man, other Russians to ‘govern’ occupied Kherson where the population hates themRussia destroys Mariupol and tries to get illegally deported residents to move to Siberia Ukraine’s ex-President Poroshenko accused of ‘treason’ and ‘financing terrorism’Sanction accomplices to Russia's revenge persecution of Crimean Tatar leader Nariman DzhelyalA great age approaches (statement of the First of December Initiative Group) EU sanctions ‘judges’ and others involved in the repression Russia brought to occupied Crimea Where are you going, Ukraine?Germany’s Nord Stream 2 collaboration comes as Russia holds a record number of Ukrainian political prisoners A brief description of the KHPG strategic litigations in the first half of 2021Legal Opinion on the political motives of the criminal prosecution and violations of human rights in criminal proceedings of Konstantin ZhevagoRussia launches attack on author of PACE report condemning human rights violations against Crimean TatarsHow can Ukraine’s leaders hand Babyn Yar into private Russian hands? Prisoners’ rights in Ukraine 2014-2021: KHPG reportUkrainian could face prison for Victory flag in memory of his grandfather who fought in WWIIAppeal of human rights organizations to the UN Special Rapporteur on Combating Torture regarding the shameful response of the Government of Ukraine to the CPT report on the results of the ad hoc visit in August 2020
• Topics / Politics and human rights 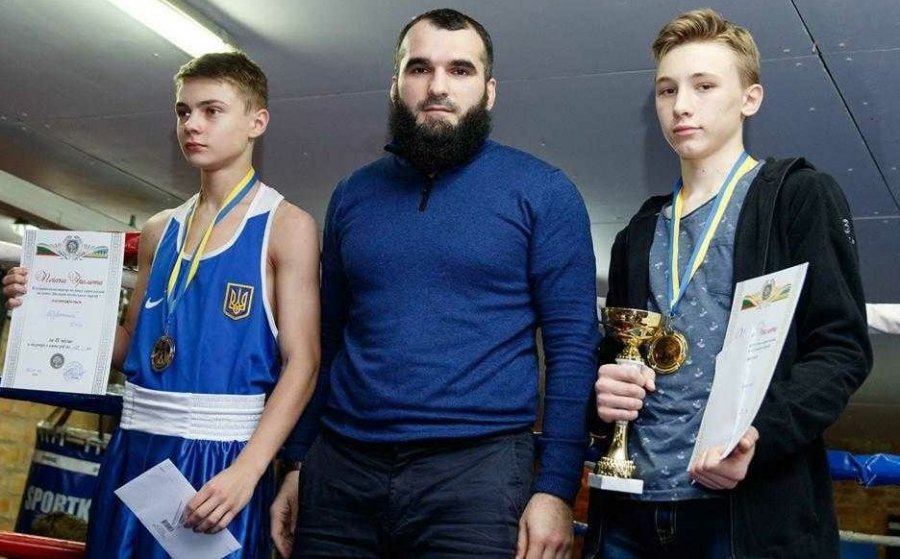 Inclusion of men who defended Ukraine in Donbas may be the most profoundly shocking aspect of the notorious ‘sanctions’ list, signed into force by President Volodymyr Zelensky in May 2021, but there are other innocent victims of a lawless and ethnically profiled PR stunt. The list also includes several respected members of the Chechen community in Ukraine, including Apti Tadayev, a sports trainer whose students have included the winners of several international championships. They and very many others have suddenly found themselves publicly slandered and threatened with economic ruin and deportation.

Zelensky would do well to consider the stark assessment given by Nikolai Polozov, a Russian lawyer who has defended many Ukrainian political prisoners in occupied Crimea and Russia.  Polozov suggests that even in Russia you do not find the dangerous replacement of the judicial system by administrative methods now underway in Ukraine.  Here a legal void is being created, he says, “a realm of lawlessness, where a person via administrative procedure <> is effectively deprived of any possibility of lodging a challenge.”  The sanctions imposed mean that a person’s assets are frozen, blocking normal avenues of legal defence. In addition, of course, such sanctions can only be challenged in the Supreme Court.

There are, undoubtedly, occasions where firm action is needed in defence of Ukraine’s security, however National Security and Defence Council sanctions must not be arbitrary and must not contradict the fundamental rights enshrined in Ukraine’s Constitution. This is, Polozov warns, a slippery slope.  “When non-transparent procedures are applied <>, it’s very easy to move from the stage where some foreigners, Chechens or others, are placed on the list to a stage where such administrative procedures are applied against ordinary citizens. At a certain point, people awake to find that they are no longer in a law-based society where they can rely on protection of their constitutional rights but find themselves one to one with police lawlessness. <> Yes, today we are talking about Chechens, but if we do not pay attention now and try to return the situation to the realm of law, then tomorrow or the next day we will be speaking of citizens of Ukraine.  And in a week, we won’t be speaking at all.”

As reported earlier, there are a number of concerns about Zelensky’s mounting use of National Security and Defence Council [NSDC] sanctions, including against Ukrainian citizens.  Polozov’s comments and the following are prompted by the huge list, including of men who have fought for Ukraine, which was signed by Zelensky into force on 21 May.

While there are some items, such as those against the leaders of the Russian proxy Donbas ‘republics’, that are entirely legitimate, the majority arouse bemusement, not least because of the claim that they are “against criminal bosses and criminal authorities”.  These are dangerously loose terms, and no attempt to explain on what grounds they were being applied was made in the report provided by Interior Minister Arsen Avakov and announced by NSDC Secretary Oleksandr Danilov on 4 June,  20 days after the sanctions came into force. The public were told only that there had been 34 ‘criminal bosses’ in Ukraine, and that there were now none.  Of 111 people described as ‘criminal authorities’ and added to the sanctions list,  42 were reported on 4 June to still be in Ukraine, with procedure underway for their expulsion.  36 were supposed to have left themselves, and another 33 were under criminal investigation. Where the 33 individuals were under investigation was not specified, but at least in their case, the authorities did appear to have brought criminal proceedings.  In the case of 42 persons whose expulsion, according to Danilov, was imminent, there is nothing to suggest that they were facing any criminal prosecution, and no way of knowing why they were being called ‘criminal authorities’.

Even if we assume that 11-12% of the 674 individuals or entities on the list were sanctioned with justification (as KHPG Director Yevhen Zakharov has suggested), and that these do not include Avakov’s “34 criminal bosses” and “66 criminal authorities” who have either left the country or are facing criminal charges, we are still left with a worryingly large number of people whose reasons for falling under Ukrainian sanctions are unclear.

It is difficult to avoid the conclusion that many of them were targeted because of their ethnic origin.   503 of the 674 names are from the Caucasus (366 people from Georgia; 48 from Azerbaijan; 37 from Armenia; 36 from Chechnya; 15 from Dagestan and 1 from Abkhazia).

Oleksandra Ustinova, an MP from the Holos party, provided disturbing details to explain the trivial reasons (over and above their ethnic origin) why some people may have ended up under financial sanctions and in danger of deportation.  Umkhan Avtayev was in a road accident in Khmelnytsky and had failed to pay a fine. Salman Sainaroyev had been suspected of an attack on a jewellery shop.  Suspected, that is, until he was not, as it turned out, that the police had got the person wrong.  He is now a witness in the case, no more.

Ustinova mentions a Ukrainian citizen, Mekhak Aleksanian, who has ended up on the list.  This is probably because he is an Armenian by ethnic origin, since neither his professional licence as a defence lawyer, nor his elected position as member of the Vasilkiv City Council, gel well with any current concept of ‘criminal bosses’.

At least seven men from the list – six Chechens and one Dagestani – fought for Ukraine.  Despite this, and in spite of assurances that their names would be removed from the list, an attempt was made over recent days to deport one of the men.    Fortunately, an MP managed to get through to Zelensky and this was averted.

The same is crucial for all these volunteers, however not only they should never have been on the lists which urgently need to be reviewed.

Daniil Goncharov is the Head of the ‘Chechen Diaspora in Ukraine’ NGO.  He points out that the sanctions list has targeted six members of the NGO’s Board - Aslan Amagov; Vakha Isayev; Arbi Karimov; Zelimkhan Sayitov; Muslim Shatov; Apti Tadayev. These, and others, are people who have never had any trouble with the law, and have never even faced administrative, let alone, criminal proceedings.

In a later interview, Goncharov mentions some of the Chechens targeted for no apparent reason, including two of the above-mentioned members of the NGO’s Board.  Apti Tadayev, for example, has on several occasions been Ukrainian Champion in Sports Grappling and has trained four world champions for Ukraine. He also runs training courses for Ukraine’s enforcement bodies and a sports section for the Chechen Diaspora in Ukraine.  He has been in Ukraine since 2007, and received permanent residence in 2014.

Goncharov himself has Ukrainian citizenship, however the list includes his own nephew, Zelikhman Sayitov.  The latter is highly educated, is in employment and has his own flat.  Together with his wife, who has also been placed on the list, they are bringing up four children who were all born in Ukraine. When Goncharov tried to find out why they had been targeted, he was told that Saitov is supposed to have been suspected of using or circulating drugs.  This is an absurd pretext for a devout Muslim, and one that lacks any plausibility when no criminal proceedings are being initiated.

Worryingly, Goncharov reports that Chechens in Ukraine have been coming under unwarranted pressure for the past year.  “On the basis of denunciations, and without any court or investigation, Chechens are designated as guilty and expelled from the country”, he says bitterly.  He mentions two men, both successful businessmen, long settled in Ukraine, who learned that their permanent residency had been revoked when they tried to return to Ukraine.

Another person who has been targeted since November 2020 is Vakha Isayev, a 38-year-old architect and businessmen who has lived in Ukraine for over 15 years with his wife, and their three children, who are Ukrainian citizens.  After discovering that his residency permit had been annulled, he turned to the court and won both his appeal and the appeal against that ruling brought by the authorities.  It was after this, and possibly in revenge for his success through the courts, that he suddenly got placed on the sanctions list.

Goncharov states that when they try to find out how people who have never had any conflict with the law could have found themselves on the list, they get told that “there is information on them”.  In Stalin’s times, the NKVD could come for you because of an anonymous denunciation.  Here too, there is no way of learning what such ‘information’ is nor its source.  Most often those they approach refer to the so-called ‘Department of Strategic Investigation’ within the Police.  As far as Goncharov is aware, this is a body that “works on ethnic gangs’.  Once again, it is quite unclear what information they had or received, given the large number of people who have never been in any sort of trouble.

A particularly grubby aspect of all of this is that on the eve of the NSDC decision, people who ended up on the list received visits from people who said that they had been stripped of their residency but offered “to reach a deal.”

Goncharov is outraged by such proposals.  They are not willing to pay bribes, he says. “There is a court for defence, we are going there to resolve all issues”. They have already won five court cases, either at first stage, or through three court levels, with around 15 others awaiting consideration.

The situation is truly devoid of any logic.  If the people on these lists were seriously suspected of committing crimes, there should have been some evidence of it, and some kind of criminal proceedings.  Without the courts, these are populist measures which certainly appear to have been dictated by a biased attitude to certain ethnic groups. This is an immensely dangerous road for Ukraine to be taking.