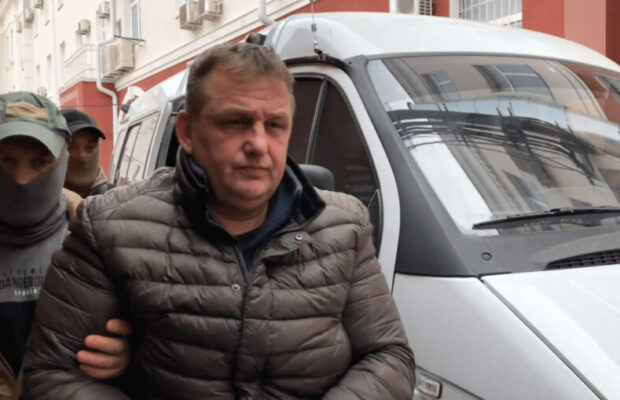 The  ‘trial’ has begun in Russian-occupied Crimea of freelance RFE/RL journalist Vladislav Yesypenko, with the preliminary hearing on 6 July remanding him in custody for a further six months.  On the basis solely of a grenade allegedly ‘found’ in Yesypenko’s car, but not containing his fingerprints, the journalist is accused of illegal preparation and possession of a homemade explosive device, charges which seem far removed from the extensive 'spying' that he ‘confessed to’ under torture.

On the eve of the hearing, Yesypenko passed on further details of how he was tortured into providing a propaganda video for Russian television.  He also reports how, after his retraction of the original ‘confession’ and insistence on proper defence lawyers, his chief torturer had reappeared and threatened that they would “work on’ him until he “croaked it” if he continued to make their lives difficult in this way.  Worth stressing that the Ukrainian journalist’s torture by Russia’s FSB began over two months before Belarus tried similar propaganda stunts with Roman Protasevich, after effectively hijacking the plane he and his girlfriend were travelling on to Lithuania.

Yesypenko now lives in mainland Ukraine with his wife and small daughter.  He was in Crimea carrying out journalist work in occupied Crimea for Radio Svoboda’s Crimean Service [Krym.Realii], and his arrest on 10 March was very clearly an offensive against both individual journalists and one of the only independent sources of information about life and repression in occupied Crimea.

Like Yesypenko’s account in two previous letters of the torture he was subjected to after his arrest, there is, in principle, no way of independently verifying his words.  The account does, however, coincide with those given by numerous political prisoners, with such methods mentioned both in reports by the UN’s Office of the High Commissioner for Human Rights and in the recent report by the UN Secretary General. There would also be no reason for Yesypenko, like many other political prisoners, to have been prevented from seeing an independent lawyer for almost a month, if Russia had nothing to hide about his treatment and had real evidence to back the charges against him..

In his new letter, Yesypenko writes that from 15 March he was forced to provide a written rejection of independent lawyers Emil Kurbedinov and Taras Omelchenko.  On around 17 or 18 March, they put dark glasses on him and took him to another building “where the same ‘main’ FSB officer who had taken part in my torture on 10 March asked “Vladislav, do you recognize me?”  I recognized him by his voice  since they had not taken my glasses off. After I replied yes, he said that in a couple of hours a television crew would be arriving, and that I would have to give an interview. If the interview went ‘correctly’, I would be taken back to investigator Vitaly Vasov at the FSB headquarters, and then to SIZO [remand prison].  If not, they would again ‘work on me’ in the basement. “  With no other options, he was forced to agree, and another FSB man, also in a balaclava arrived to train him in learning what he had to say.  After the torture from 10 to 11 March, he was still in a bad state and had problems memorizing the text.  He says he still remembers the stunned look of the interviewer when in answer to the latter’s question “what did you want a grenade for?”, he recited the answer written by the FSB: that this had been “to defend himself from aggressive Crimean Tatars. The FSB couldn’t have thought up anything more insane”

Yesypenko explains that on around 15 or 16 March, in the FSB corridor, he was lucky enough to see rights lawyer Lilya Hemedzhi who told him that they had all been looking for him.  He was normally guarded by two FSB men, but on this occasion (perhaps sought out by Hemedzi?), his guards were missing for long enough to enable him to quickly pass her a statement regarding his torture and rejection of the FSB-appointed ‘lawyer’ Violetta Sineglazova.

It was presumably thanks to that chance meeting that Yesypenko was able to see Omelchenko the next time he was brought to the FSB investigations unit and could agree his position for the coming court hearing.  As reported earlier, at that hearing on 6 April, Yesypenko formally rejected the lawyer being foisted on him, and retracted his ‘confession’, stating that it had been obtained through torture.

He was very nervous during that court hearing, he says, and also shocked by the position of the judge.  “When I stated that I had been tortured and announced my rejection of lawyer Sineglazova, he announced a break and then refused to accept my rejection [he had clearly consulted with somebody on that subject while in his chamber].”   In fact, Sineglazova did herself at this point withdraw from the case, and Yesypenko has been represented by independent lawyers.

He says he expected reprisals from the FSB, but for the next three days there was nothing.  Then, on 9 April, he was taken to the ‘investigator’ Vlasov, without his lawyers being informed. Since Vlasov simply took his fingerprints again, this was clearly just a pretext.  Yesypenko was then taken out of the FSB building in dark glasses and handcuffs and taken in a minivan in a direction he did not recognize.  The vehicle stopped after around 15 minutes and he was taken into a basement and seated on a chair, still in glasses and handcuffs.  At first he prayed, then he began looking around.  He saw railings on the window and wondered if they would kill him, by hanging him from these.

“I decided for myself that if they began killing me, I would fight to the last. If they begin torturing me, then I’ll smash my eyebrow on the corner of the wall (by hitting my head against it), there will be a lot of blood and that may stop them. Since then, in sending me back to the SIZO, they would ask where the detainee’s injuries came from.”

He considers the various forms of threats from the FSB – of more torture through electric shocks and beatings; ‘press huts’ in the SIZO [when other prisoners are used to beat up a detainee], or simply, murder.

He suspects he was in the “fully-fledged torture chambers” of the Simferopol FSB offices, that he had heard about from Crimean Tatars who were taken there to have ‘confessions’ tortured out of them.

He was held there, in the cold, for about an hour before several individuals came in, including the main FSB officer who had tortured him those first days.

“Vladislav, what the fuck is going on?  I’d just returned to Moscow and was summoned back because you said much too much in court. Have you believed in your own immortality?  Or did your arsehole lawyers advise you to deny everything?  The lawyers will go home, and you’ll remain with us.  Do you understand that we’ll work on you till you croak it?”

After further bluster, his torturer gave him “the word of an officer” that if Yesypenko admitted guilt, they wouldn’t ‘work on’ him anymore.  Yesypenko notes drily that the grenade they planted in his car and the whole falsification of the evidence against him does not appear to clash with this “officer’s honour”.

It is, in fact, maximum publicity now that will protect Yesypenko (and all Russia’s Ukrainian political prisoners).  On 6 July, Ukrainian journalists, civic activists and others held a flash-mob to publicize his case, under the hashtags #FreeYesypenko and #CrimeaisUkraine, as well as rallies in several Ukrainian cities demanding his release.

The first preliminary hearing normally concentrates on procedural issues and is always closed to the public.

More details about the torture applied, the charges and about international protest over Yesypenko's arrest here: :