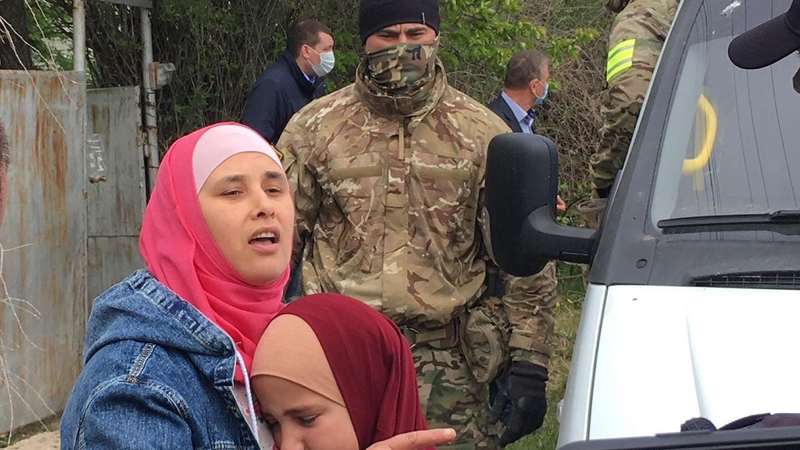 After almost three months of excuses, the Russian Investigative Committee in occupied Crimea has formally refused to hand the body of Nabi Rakhimov to his relatives for burial.  With appalling cynicism, they claim that the decision is due to the Uzbek refugee’s non-existent “terrorist activities”.  It seems increasingly likely that the FSB’s targeting – and killing - of Rakhimov was in retaliation for his successful defence of his rights with the European Court of Human Rights.  Refusal to allow a devout Muslim’s body to receive proper burial can only be because the body would prove that the FSB are lying about how he died.

Lawyers have been trying to get Rakhimov’s body returned since 12 May, the day after he was killed. The Investigative Committee first simply ignored written applications, then, after the lawyers went to court, claimed that a forensic medical examination was underway.

A month and a half after the latter excuse, ‘senior investigator’ Alexei Vadimovich Skorin informed the lawyers that Rakhimov’s body was not being handed over.  Article 14.1 of the Russian law on burials, etc. was cited.  This states that the bodies of people whose “criminal proceedings in connection with their participation in terrorist activities were terminated due to their death as a result of stopping the said terrorist actions” will not be returned.

Russia has lost countless cases at the European Court of Human Rights over its abductions, enforced disappearances and killings in Chechnya, and the scope for abuse that this norm provides is self-evident.

In this case, there is nothing at all to suggest that criminal proceedings had ever been initiated against Rakhimov, a peaceful family man who, together with his family, had fled religious persecution in Uzbekistan.  The lawyers, together with Rakhimov’s widow, Sokhiba Burkhanova, will be appealing against the Investigative Committee’s decision, both in Russian / Russian occupation and in international courts.

It is crucial to recall that this story does not begin with Rakhimov’s death on 11 May.  He had been detained in Russia in 2013 pending deportation to Uzbekistan.  With the help of human rights lawyers, he applied to the European Court of Human Rights [ECHR], both over his treatment in detention and denial of effective judicial review, and over the plans to forcibly return him to Uzbekistan where he faced torture and long imprisonment for his faith.  The ECHR judgement in the Case of Rakhimov v. Russia became final in December 2014.   The Court not only ruled that Russia’s had violated Rakhimov’s rights, but also expressly prohibited Russia from extraditing him to Uzbekistan.

Rakhimov was facing persecution in Uzbekistan solely for alleged involvement in Hizb ut-Tahrir , a peaceful transnational Muslim organization which is not known to have committed any acts of terrorism anywhere in the world.  Vitaly Ponomaryov, an expert from the renowned Memorial Human Rights Centre, believes that Russia’s Supreme Court declared Hizb ut-Tahrir  ‘terrorist’ in 2003 so as to enable the Russian authorities to forcibly deport asylum seekers like Rakhimov to Uzbekistan.  Since 2013/2014 Russia has been imprisoning men and sentencing them to 20 years or more, without any crime, merely on the basis of flawed, and often fabricated, evidence of ‘involvement’ in Hizb ut-Tahrir.  Since 2015, it has been further violating international law by using these same ‘Hizb ut-Tahrir’ charges in occupied Crimea, where it particularly targets Crimean Tatar civic activists and journalists. Hizb ut-Tahrir is legal in Ukraine, and Russia has no right to be applying its repressive legislation on illegally occupied territory.

This was not the first time that Russia’s FSB had showed no respect for believers observing the Holy Month of Ramadan.  At about 6 a.m. armed officers burst into the house where Rakhimov’s wife and two underage children were living.  They do not appear to have produced any warrant, and illegally refused (as always) to allow the lawyers who swiftly arrived to be present. Sokhiba Burkhanova was taken away, first to the migration service, then for questioning, with her 15-year-old son Takiuddin insisting on going with her.

It is a tragic, and critical, part of this story that Rakhimov was alone in the house in a neighbouring village that he was building to earn money for the family.  There had reportedly been signs of surveillance and the FSB were doubtless aware that they would find Rakhimov alone.

There are no credible grounds for believing that Rakhimov was armed, and nobody in their right minds would have attempted, as claimed, ‘a shoot-out’ against a huge contingent of enforcement officers.  He had no reason to believe that he was facing criminal prosecution and would have understood that the only grounds for arresting him would be charges of involvement in Hizb ut-Tahrir.

Had Rakhimov really died of gunshot wounds, there would be no reason for the secrecy and refusal to allow the religious burial of a man whose supposedly terminated criminal proceedings were first mentioned after his violent death.  It is much more likely that the FSB tortured him to death and then fired shots to hide the truth.

No end to the brutality

Sokhiba Burkhanova learned that her husband was dead only when an officer pushed a photo in front of her and demanded that she recognize the man they had killed. A Russian-controlled ‘court’ then ordered her detention in a migrant unit in Krasnodar (Russia), pending forced deportation to Uzbekistan. On 27 May, the European Court of Human Rights applied Rule 39, preventing Russia from forcibly sending Burkhanova to Uzbekistan where she too would face persecution.  Russia is complying to the extent that it has not deported here, however the Russian-controlled ‘High Court’ in Crimea on 28 May rejected her appeal, and she remains effectively imprisoned in the appalling conditions of the Krasnodar holding unit for so-called illegal migrants.